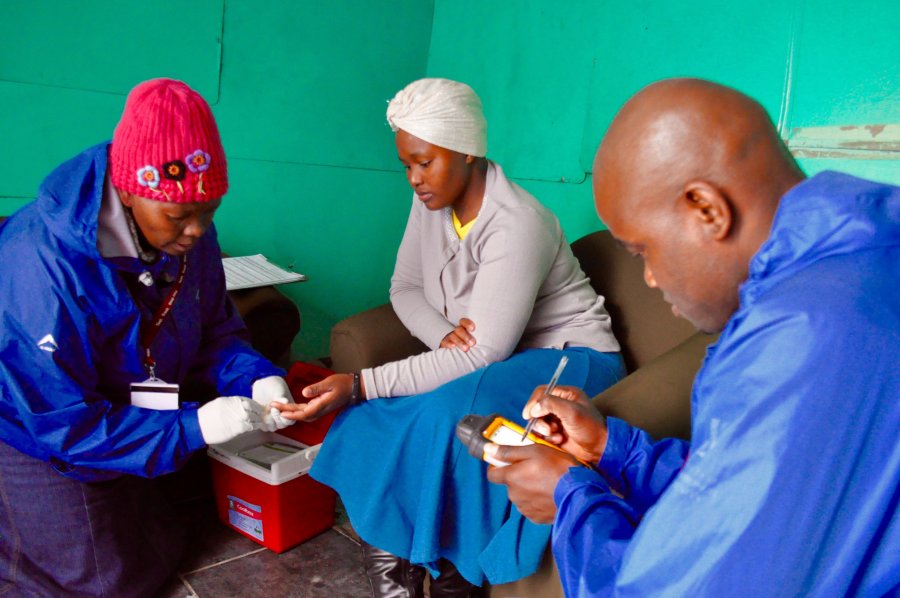 A package of HIV prevention interventions including community wide home-based counselling and testing, is an economically and efficient strategy to control the HIV epidemic in southern Africa, according to a study published in the Lancet Global Health.

The largest ever HIV prevention trial, PopART previously found a ”Universal Testing and Treatment” strategy reduced new HIV infections by around 20% in southern Africa. This new study shows that is it possible for this package of HIV prevention methods to be delivered through community health workers at scale for a low-cost per person per year (US$6.53 in Zambia and US$7.93 in South Africa).

The package includes door-to-door home-based counselling and testing, linkage-to-care, promotion of antiretroviral therapy (ART) adherence, and voluntary medical male circumcision. It is important to evaluate the cost-effectiveness and affordability of such large-scale, integrated prevention strategies because costs can accumulate to a considerable amount when projected for total country populations and sustained for a prolonged period.

Dr Ranjeeta Thomas, Assistant Professor of Health Economics at LSE and lead author of the study, said: “These results show that a population level combination HIV prevention strategy that includes home-based HIV testing can be delivered at low unit cost. Universal test and treat generates substantial health gains compared to standard health facility-based provision. Our results provide crucial evidence on the costs and cost-effectiveness of this strategy for countries looking to control the HIV epidemic.”

In 2019, approximately 38 million people were living with human immunodeficiency virus (HIV) worldwide, with 1.7 million new infections that year. HIV incidence is declining worldwide but is unlikely to reach the UNAIDS Fast Track target of under 200,000 new infections in 2030. Steep reductions in incidence are needed to curb the HIV epidemic, especially in southern Africa where the prevalence of HIV is higher than anywhere else in the world.

Richard Hayes, Professor of Epidemiology and International Health at LSHTM, and Principal Investigator of the trial said: “The PopART trial results that were published in the New England Journal of Medicine in July 2019 showed that the PopART combination prevention package reduced HIV incidence in the general population by around 20%. This is a substantial effect that would build up over time if the intervention were sustained. These new data, quantifying the cost of the intervention and showing that it is also cost-effective, are very important and will be of great value to health policy makers considering how to substantially reduce HIV incidence during the coming decade to achieve the UNAIDS targets for elimination.”

To date, there is limited and conflicting evidence on the cost-effectiveness of combination prevention interventions including universal HIV testing and treatment. This study provides urgently needed evidence on the benefits and costs of universal test and trace in high-prevalence communities.

Existing studies are problematic to compare due to differences across studies – including scale and features of the intervention, country settings and target population. This study used a state-of-the-art individual-based simulation model specifically developed to model this population level trial and was informed extensively by data collected during the trial.

Study projections indicate a sustained reduction in HIV incidence with universal testing and treatment delivered over 17 years, and that the PopART intervention is certain to be cost-effective at thresholds over US$800/DALY averted. Such thresholds are used by policy makers to decide when the benefits from a new intervention outweigh its costs.

The authors believe that these findings are critical for national policy makers to determine whether the package of HIV prevention interventions delivered under PopART is cost-effective and affordable for their setting.

This study was carried out by researchers from LSHTM , Imperial College London and LSE in collaboration with the HIV Prevention Trials Network (HPTN), Zambart (Zambia), the Desmond Tutu TB Centre (South Africa), and Oxford University, and funded by PEPFAR, the National Institutes of Health, and the International Initiative for Impact Evaluation with support from the Bill & Melinda Gates Foundation. The study was sponsored by the National Institute of Allergy and Infectious Diseases, part of NIH.