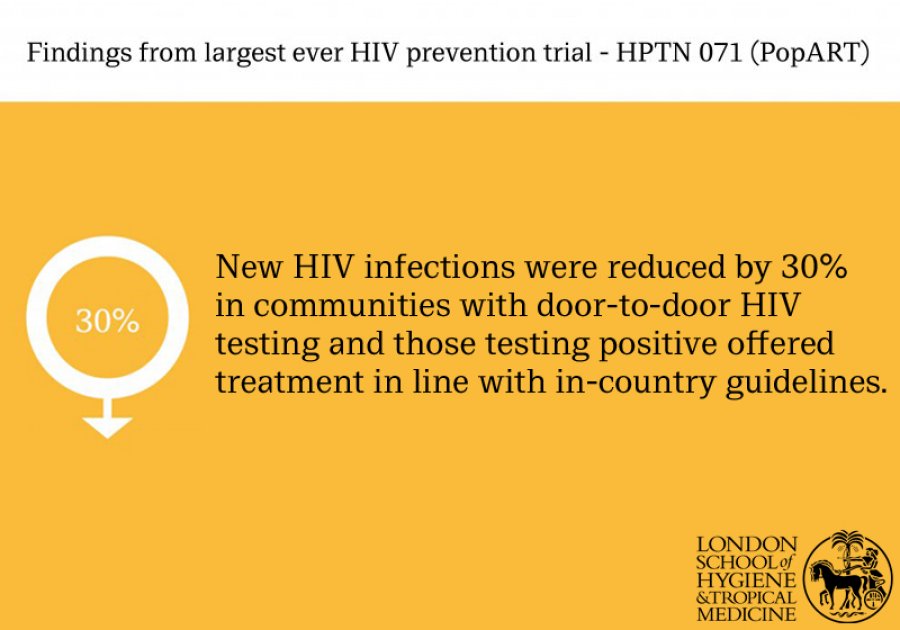 New HIV infections in southern Africa could be reduced substantially by offering entire communities voluntary HIV testing, and immediately referring those who test positive for HIV treatment in line with local guidelines, according to research published in the New England Journal of Medicine.

The HPTN071 (PopART) trial  found that new HIV infections were 30% lower in communities where this intervention was introduced alongside offering other proven HIV prevention measures to those who tested negative, compared to communities that received standard care.

The randomised study involving around one million people in Zambia and South Africa was led by researchers at the London School of Hygiene & Tropical Medicine (LSHTM) and Imperial College London. The study found that a similar decline in new HIV infections was not seen in communities where those who tested positive were offered immediate treatment from the beginning of the study. Analyses are under way to explain this puzzling outcome.

In 2017, around 37 million people were living with HIV worldwide, with 1.8 million new infections. HIV incidence is declining worldwide, but is unlikely to reach the UNAIDS target of under 500,000 new infections by 2020. Steep reductions in incidence are needed to curb the HIV/AIDS epidemic, especially in southern Africa where the prevalence of HIV is higher than anywhere else in the world.

The study reports the latest results of HPTN071 PopART, a community-randomised trial which aims to discover whether the ‘universal test and treat’ strategy can reduce new HIV infections in Zambia and South Africa.

The study was carried out by researchers from LSHTM and Imperial College London in collaboration with the HIV Prevention Trials Network (HPTN), Zambart (Zambia), the Desmond Tutu TB Centre (South Africa), and Oxford University, and funded by PEPFAR, the National Institutes of Health, and the International Initiative for Impact Evaluation with support from the Bill & Melinda Gates Foundation. The study was sponsored by the National Institute of Allergy and Infectious Diseases, part of NIH.

Study lead Professor Richard Hayes from LSHTM said: “People living with HIV who achieve and maintain an undetectable level of HIV in the blood by taking and adhering to antiretroviral therapy (ART), do not sexually transmit the virus to others. This is central to ‘universal test and treat’, which aims to ensure that everyone in the community knows their HIV status, with those found HIV-positive linked rapidly to the clinic for treatment. Our study found that a combination prevention strategy, including ‘universal test and treat’, may be an effective tool to slow the global HIV epidemic.”

PopART took place between 2013 and 2018 in 21 communities in South Africa and Zambia. Each community had an average of roughly 50,000 residents and they were matched by geographical location and estimated HIV prevalence. Communities were assigned at random to one of three study arms.

At the beginning of the trial, the national guidelines for HIV treatment in Zambia and South Africa specified that people living with HIV should start ART when their CD4+ T cell count—a measure of immune health—had declined to 350 cells per µL. That threshold was raised to 500 cells/µL in 2014. Then in 2016, the countries recommended that everyone diagnosed with HIV begin ART immediately, regardless of CD4+ T-cell count. Consequently, arms A and B received the same intervention during the last two years of the trial.

To measure the impact of the interventions, the investigators recruited a random sample of 48,300 adults aged 18 to 44 years. Members of the study team visited these participants at the start of the trial and then once a year for three years to collect data through a questionnaire and blood testing, including a test for HIV infection.

Investigators found that HIV incidence was 30% lower in arm B than the control arm. By contrast, only a non-significant 7% reduction was seen in arm A.

Among those members of the population cohort who tested positive for HIV by the second year of the study, the investigators determined the proportion who had an undetectable level of virus in their blood. Viral suppression was achieved by 72% of these study participants in arm A, 68% in arm B and 60% in the arm C.

Professor Sarah Fidler, study co-lead from Imperial College London said: “The idea behind our study was that if most people living with HIV know their HIV status and take HIV treatment, the risk of passing the virus on to their partners and children will be greatly reduced. The results show that this approach was successful –we hope the findings may help to reduce the number of new HIV infections across the world.”

Professor Helen Ayles of LSHTM and Zambart who led the study in Zambia, said: “We saw very strong evidence that new HIV infections decreased by a third with a prevention strategy where HIV treatment was started according to country guidelines. We did not see a similar reduction when universal HIV treatment was offered from the beginning of the study. Additional analyses are underway to explore the reasons for this finding. However, overall, both strategies improved knowledge of HIV status, uptake of treatment and viral suppression.”

The researchers found that treatment coverage was lower in young people (aged under 30 years) and in men. HIV treatment and prevention programmes will need to address these gaps in coverage to realise the full potential of strategies like PopART.

Professor Hayes said: “These results are the culmination of 10 years of work.  We are very grateful to all of our research partners, the study funders and sponsor, and especially the residents of our 21 study communities in Zambia and South Africa, without whom this research would not have been possible.”

The authors acknowledge limitations of their study including the relatively small number of communities in each study arm, the under-representation of men in the randomly sampled research cohort, and high rates of mobility and migration which meant that not all participants could be followed up.