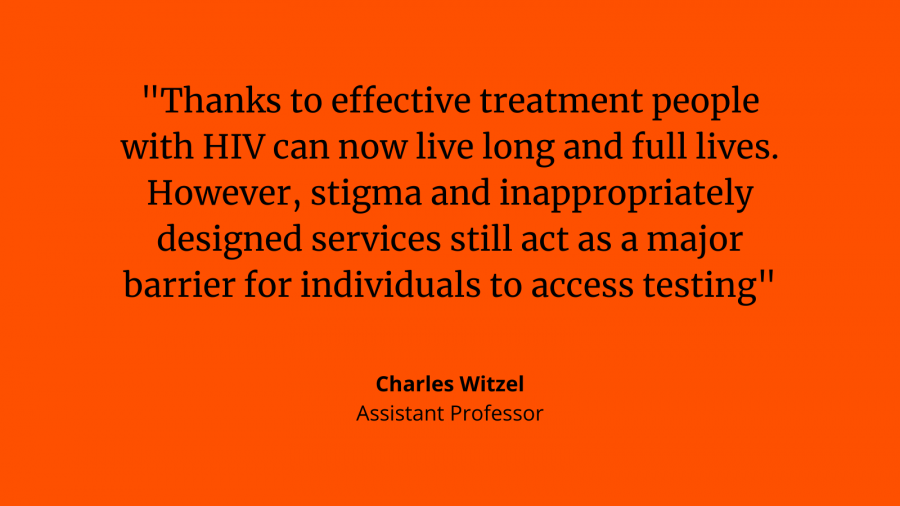 HIV self-testing could reduce the time between HIV infection and HIV diagnosis amongst trans people when compared to standard testing services, suggests new research in EClinicalMedicine.

The project was a collaboration between the London School of Hygiene & Tropical Medicine (LSHTM), University College London (UCL), and the Medical Research Council Clinical Trials Unit. It involved more than 100 trans men and trans women in England and Wales, and is the largest HIV self-testing trial in this community to be reported.

More than 93% of participants in the self-testing group tested for HIV compared to 26% in the standard care group. HIV testing frequency was also increased by three times in the repeat testing group. Importantly there were no negative impacts on STI testing, but uptake of these services was very low across all arms in the trial.

Accompanying qualitative research led by the London School of Hygiene & Tropical Medicine revealed that the main reason HIV self-testing was so popular was because most sexual health services do not meet the needs of trans people. Services were reported to be often set-up and run in a way that did not recognise their unique needs.

Trans people are at increased risk of HIV and poor sexual health compared to other groups. They tend to test less often and have worse clinical outcomes when they are diagnosed with HIV.

The researchers say rolling out self-testing more widely and making sure it is accessible to trans people will increase HIV testing rates, and that staff require training aimed at improving the experiences of trans people when they access sexual health services.

Charles Witzel from LSHTM who led the qualitative study, said: “HIV has changed enormously. Thanks to effective treatment people with HIV can now live long and full lives. However, stigma and inappropriately designed services still act as a major barrier for individuals to access testing, the critical first step towards treatment for those with undiagnosed HIV and an important prevention opportunity for those who are HIV negative.

“Despite increased vulnerability for trans people, they are seldom included in HIV testing or prevention research, and when they are their data is rarely presented separately from other priority groups such as gay and bisexual men. Our research aimed to shed new light on how best to meet the HIV testing needs of trans men and trans women.”

HIV self-testing was legalised in the UK in 2014 but has not been made widely available on the NHS. Instead, self-testing has mostly been provided in fits and starts through pilot projects run by the voluntary sector and through a large clinical trial in England and Wales.

An HIV Self-testing Public Health Intervention (SELPHI) study was a large randomised trial of HIV self-testing in England and Wales which recruited men (cis and trans) and trans women, all who have sex with men.

The trial assessed whether providing free self-testing would increase HIV testing uptake and frequency, and if it had any impacts on STI testing.

Acceptability of the HIV self-test kit was very high: 97% found the instructions easy to understand, 97% found the test easy to use and 100% reported a good overall experience.

The qualitative peer-interview study sourced additional insights of the experiences of trans people when accessing HIV testing services, including HIV self-testing. It found staff working in sexual health clinics frequently misgendered them or provided stigmatising care which wasn’t respectful of their gender identity and/or their sexual orientation.

However, participants who had accessed sexual health services specifically designed for and by trans people said that these services were excellent.

Alison Rodger from UCL who co-led the trial said: “Put together, the results of our study clearly show the potential HIV self-testing has to meet some of the immediate HIV testing needs for trans men and trans women. This could mean more people with HIV receive treatment earlier which will have benefits for their health and will also reduce onward transmissions.”

Talen Wright, a peer researcher who worked on the study said. “It is critical that sexual health clinics adapt to be more inclusive, welcoming and to make sure they meet the diverse needs of these groups. Trans people must be actively included in these initiatives to make them successful.”

The authors acknowledge limitations of the study, including that the main trial did not include non-binary people, and their experiences while accessing HIV testing remains a significant research gap. Given the findings on inappropriately designed services, future sexual health research and service improvement initiatives for non-binary people is a critical priority.

The study was funded by the National Institute for Health Research.

HIV self-testing found safe, acceptable, and accurate in Malawi study
More gay men than ever getting tested for HIV, but 1 in 4 have still never had a test
‘Test and Treat’ reduces new HIV infections by a third in southern Africa communities
‘Test and Treat’ intervention could contribute to towards HIV elimination by the year 2030
Learn More