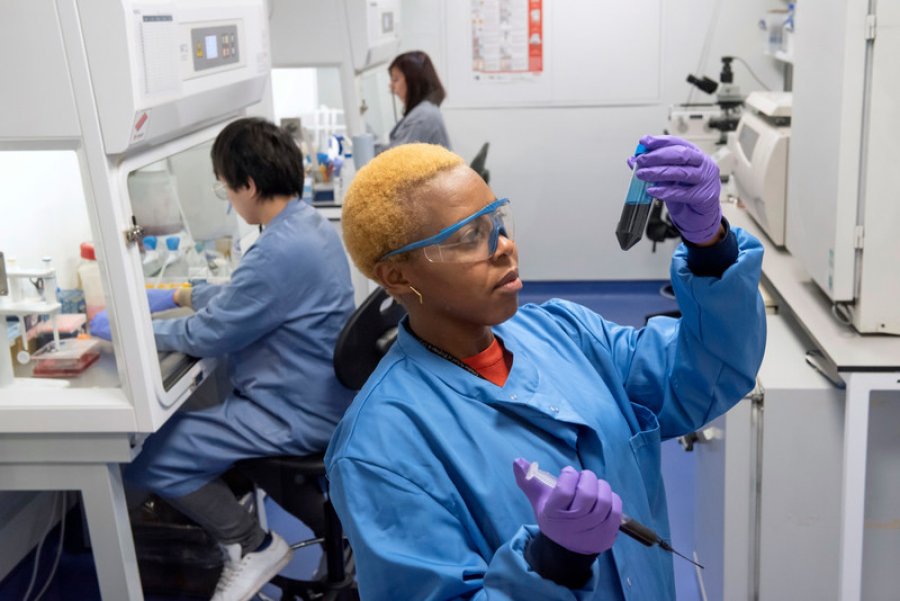 Parasites which cause malaria may have adapted to overcome the protection offered by the sickle haemoglobin gene mutation, according to a study published in Nature.

The study, carried out by a team from the Wellcome Sanger Institute, the University of Oxford, the KEMRI-Wellcome Trust Research Programme and the MRC Unit The Gambia at the London School of Hygiene & Tropical Medicine (LSHTM), along with collaborators from the U.S. and Mali, found genetic variants in malaria parasites occur more frequently in people carrying the sickle haemoglobin gene. This suggests that this group of malaria parasites may have evolved to be able to infect and cause serious disease in those who carry sickle haemoglobin.

This is the first time this phenomenon has been observed in a study, and further research is needed to understand the biological mechanisms behind this.

The team identified three genetic variants in the parasite genome that are found unusually often in infections of individuals who carry at least one copy of the sickle haemoglobin gene, showing correlation between the two. Sickle haemoglobin, which causes sickle-cell anaemia when inherited in two copies, is commonly found in individuals from sub-Saharan Africa because one copy provides protection against malaria.

From this study, future research into the biological function of these parasite variants and the mechanisms by which they interact with sickle haemoglobin can be investigated. Understanding these key questions could lead to new ways to protect against and treat malaria.

Professor David Conway, study author and Professor of Biology at LSHTM, said: “Making the connection between the genetic variants of the parasite and its ability to infect those with sickle haemoglobin paves the way for research to dive deeper into the biological mechanisms behind this. Greater clarity on the ways that P. falciparum evades the human body’s defences could lead to new opportunities for protecting against malaria and treating those living in the most affected areas.”

Malaria is one of the world’s most deadly infectious diseases, with an estimated 241 million cases and over 627,000 deaths in 2020, most of which were young children in sub-Saharan Africa. In this region, the disease is mainly caused by the parasite, P. falciparum, which has been shown to have different genetic profiles depending on which area it is found in. Tracking these parasite populations gives insight into how different groups of malaria parasites compete for survival and spread, and can help inform control measures.

In this study, researchers sequenced the parasite genomes from over 3,000 infections in children from The Gambia and Kenya, all of whom had severe symptoms of malaria, and compared their host and parasite genomes.

They found that infections of individuals with sickle haemoglobin tend to be caused by a certain type of parasite. Specifically, they tend to have particular mutations in three regions of the parasite genome, all of them appearing in genes whose function is currently unknown.

The researchers suggest that sickle haemoglobin in humans may have acted as a selective pressure on the parasite, driving it to adapt and leading to a population that can now infect people with sickle haemoglobin as well as those with normal haemoglobin. However, these sickle-associated parasites are not fully dominant across the African continent even though they seem to be able to infect the majority of humans compared to other strains, implying there may also be other factors impacting spread.

While this research implies that sickle haemoglobin in humans plays a role in shaping parasite genomes, further research is needed in larger populations and in those that are asymptomatic to shed light on the genetic interaction between the parasites and host genome.

Dr Gavin Band, first author and Statistician at the Wellcome Centre for Human Genetics, University of Oxford, said: “We have known for years that human genetic variants such as sickle haemoglobin can provide protection against malaria, but we wanted to understand if malaria parasites have evolved to overcome this. In our study, large scale genome sequencing allowed us to compare thousands of human and parasite genomes. For the first time, we were able to highlight a correlation between the human sickle haemoglobin mutation and three regions of the parasite genome, suggesting that the human genome is a selective pressure in the evolution of the parasite.”

Professor Tom Williams, author and Wellcome Trust Senior Fellow at The Kenyan Medical Research Institute (KEMRI), Kenya, and Professor of Haemoglobinopathy Research at Imperial College London,  said: “Malaria is a deadly disease, taking hundreds of thousands of lives every year. Previously, sickle haemoglobin was believed to have a protective effect against severe disease. However, this study highlights the importance of continually investigating this parasite so that we can be informed about how it adapts against selective pressures.”

Professor Dominic Kwiatkowski, senior author and Senior Group Leader at the Wellcome Sanger Institute, and Director of the MRC Centre for Genomics and Global Health, said: “Genomic surveillance is a powerful tool for identifying and tracking parasite variants that affect our ability to control the disease.  This discovery of genetic variants that allow parasites to evade the protective effect of sickle haemoglobin is biologically fascinating, and opens a new chapter in our understanding of the evolutionary arms race between malaria parasites and their human hosts.”

This research was funded by Wellcome, the Bill and Melinda Gates Foundation, and the Medical Research Council (UKRI).