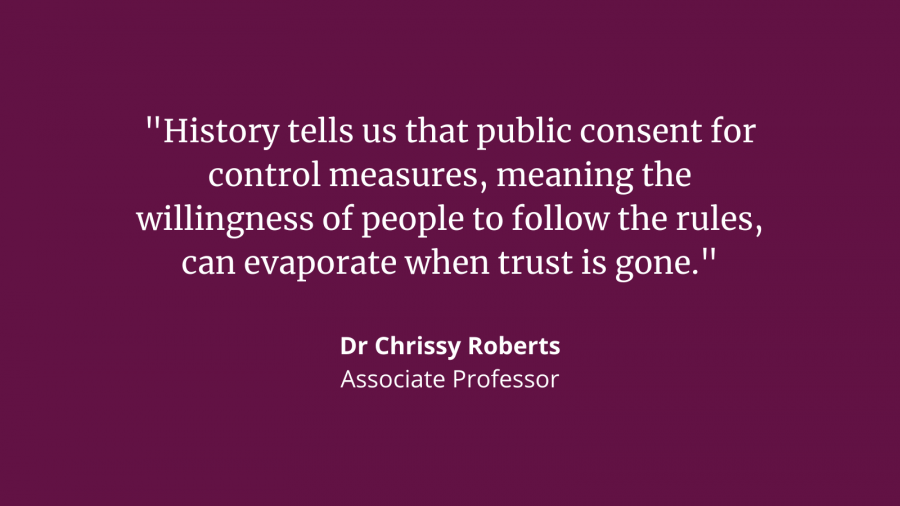 High levels of public support for strict measures to control COVID-19 during the first wave of the pandemic did not reflect high levels of public trust in the UK government’s honesty, transparency or motives, suggests a new study published in PLOS One.

The ‘mixed-methods’ project, a collaboration between the London School of Hygiene & Tropical Medicine (LSHTM) and University College London (UCL), involved collecting data from more than 9,000 adults living in the UK using an online survey.

It found that during the first wave of COVID-19 (April 2020) 95% of participants were in support of the government having powers to enforce behaviour change. However, only around half (52%) thought that the government was actually doing a good job of controlling COVID-19. Even fewer (36%) thought the government “always or mostly” told the truth about COVID-19.

The study brought together scientists from many disciplines including outbreak specialists, anthropologists, data scientists and epidemiologists. The team asked people to talk about their experiences of lockdown in their own words and then, using sophisticated machine learning approaches, identified where participants talked about topics that related to trust and transparency.

The team’s social scientists then read the responses to piece together how people’s attitudes towards lockdown related to their perspectives on how trustworthy, truthful and transparent they felt the UK government was being about COVID-19 and the response.

Against a backdrop of relatively low opinions of the UK government’s honesty and transparency, the team was surprised to find many of the study’s participants still supported the implementation of strict measures to force people to comply with control guidelines. Many even said that they felt there were times when it was justifiable, or even necessary for the government to be less than fully open.

Dr Luisa Enria, Assistant Professor at LSHTM and primary author of the study, said: “In times of crisis and insecurity, citizens may be willing to accept lower levels of transparency for the sake of national security. But if this is a crisis effect that is driven by sudden dramatic changes and a climate of fear and uncertainty, then this is not something that the government can necessarily rely on in the long term to maintain confidence in, and support for control guidelines.”

Previous work by Dr Enria and the study’s co-lead investigator Professor Shelley Lees has shown that the success of outbreak responses is closely linked to the strength of public trust.

Professor Lees from LSHTM said: “Our work in communities affected by Ebola Virus in West Africa and DR Congo has shown that if the public doesn't trust the people leading the response, and if there are perceptions that those leaders lack transparency and honesty; then this can hamper control of the infection.”

Groups that had lower levels of household income, or who had higher levels of education such as a degree, were each around half as likely to trust the government as people at the other ends of the spectrum. Among the 48% of respondents who felt that the government was not making good decisions, a significant majority (60%) felt that the economy was being prioritised. Only around 5% thought that people and their health were the main priority for the government.

In the group who thought that the government was doing well, those figures were very different (respectively 10% and 32%). Despite efforts to distribute the survey to black and minority ethnic groups, the study team had a very low response and cautioned that further work was needed to understand issues of trust among members of these and other minority communities.

Dr Enria said: “Many of our respondents expressed concerns about the extent to which scientific evidence was really being used to guide policy. The consistency of communications from the government, the lack of insight into how policy decisions were being made, and about what were the government’s real motivations, were also concerns of many people surveyed.

“These are questions we’ve come to hear a lot over the last year, but they were already being asked a year ago at the beginning of wave one.”

The research team recommend that the UK government should develop targeted community engagement measures and tailor their messaging and public discussion to the realities faced by particular groups across the political, social and economic divides.

In contrast to the centralised and top-down communication so far, the team believes that this approach could directly address the diversity of experiences and perspectives that exist across the country, and help to maintain support and adherence to government guidelines.

Dr Chrissy Roberts, Associate Professor at LSHTM and the study’s co-lead investigator, said: “We know from the lessons of past epidemics that public consent for control measures, meaning the willingness of people to follow the rules, can just evaporate when trust is gone. The government can’t depend on crisis effects forever, nor ignore the hard to reach groups when trying to encourage good infection prevention and control behaviours.

“They have to gain the trust of every group. This means reaching out to, opening dialogues with, and engaging in constructive collaborations with people and communities outside their normal sphere of political and social influence.”

The authors acknowledge limitations of the study, including that the survey was not population representative, meaning that the findings could not be generalised across all communities and demographic groups in the UK. There was over-representation of white, female and more highly educated people in the survey and significant under-representation of black, Asian and minority ethnic people. The study team emphasised the importance of exploring the political consequences of epidemic control measures in the contexts of structural inequality and lack of equity for ethnic and cultural minorities.