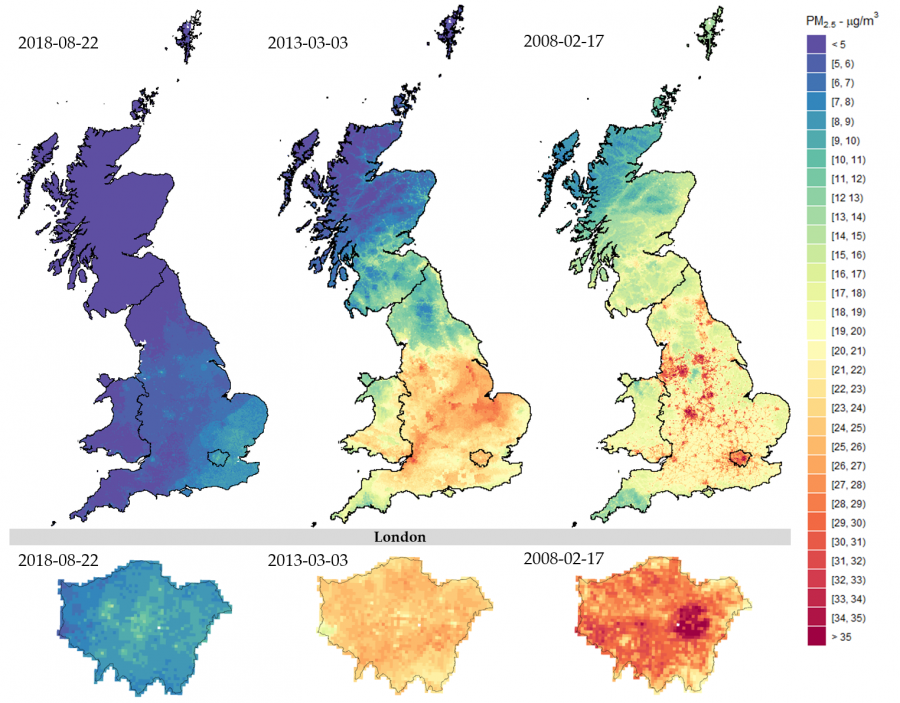 A novel method that combines artificial intelligence with remote sensing satellite technologies has produced the most detailed coverage of air pollution in Britain to date.

Highlighted by new research led by the London School of Hygiene & Tropical Medicine (LSHTM) and published in Remote Sensing, the methodology provides accurate estimates of concentrations of air pollution across Great Britain. The model offers an impressive level of details, with measurements provided at daily level and in a 1x1km grid across the whole Great Britain.

Results indicate that the South-East of England is the most polluted region, and they identify hot spots in urban and industrial areas. Encouragingly, the findings also show an overall decline in air pollution in Great Britain during the last decade.

The researchers say this novel approach could revolutionise the assessment of exposure to air pollution and our understanding of the related health risks, by linking country-wide exposure maps and health databases.

Currently, scientists rely on ground-based monitors to measure air pollution, however, these are sparsely located, mostly concentrated in urban areas, and are not always taking measurements continuously. This means there are no nationwide air pollution records accurate enough to be used in epidemiological analyses to evaluate health risks.

In this study, the researchers applied an innovative methodology that uses artificial intelligence and satellite-based data to estimate the daily human exposure to fine particles of air pollution from 2008-2018.

The team combined readings from existing ground-based monitors with data from earth observation satellite instruments, which provides information on weather patterns, aerosols suspended in the atmosphere, land use and vegetation cover. They also incorporated data from other sources, including population density, road density and the location of airports.

Using sophisticated machine learning algorithms, they combined the datasets to produce estimates of the ground-level concentration of fine particulate matter (less than 2.5 micron in size, PM2.5), one of the most dangerous air pollutants. They divided Great Britain into grid cells and derived daily pollution series in the period 2008-18.

Dr Rochelle Schneider, first author who led the analysis, said: “This research uses the power of artificial intelligence to advance environmental modelling and address public health challenges. This impressive air pollution dataset represents PM2.5 records for 4,018 days in a spatial domain of 234,429 grid cells. This provides a remarkable total of 950 million data points that comprehensively quantify the level of air pollution across the whole of Great Britain in an eleven-year period.”

The results of the study were cross-validated by comparing the estimates produced by the model to measurements taken from particular ground-based monitors, and were found to be closely aligned.

The team now intend to combine the data with local health records. This linked information will be used in cutting-edge epidemiological analyses to reveal a highly granular picture of the association between air pollution and health outcomes across Great Britain.

Professor Antonio Gasparrini, Professor of Biostatistics and Epidemiology at LSHTM and senior author of the study, said: “This study demonstrates how cutting-edge techniques based on artificial intelligence and satellite technologies can benefit public health research. The output reveals the shifting patterns of air pollution across Great Britain and in time with extraordinary detail. We now hope to use this information to better understand how pollution is affecting the nation’s health, so we can take steps to minimise the risk. The vast amount of data produced will provide a vital tool for public health researchers investigating the effects of air pollution.”

The World Health Organization estimates that there are seven million deaths per year worldwide due to air pollution, which causes lung disease, lung cancer, heart disease and strokes.

Dr Vincent-Henri Peuch, Director of Copernicus Atmosphere Monitoring Service (CAMS) at European Centre for Medium-Range Weather Forecasts (ECMWF), said: “This innovative method has combined the strengths of different data sources to give accurate and comprehensive estimates of air pollution exposure, including ground-based sensors, satellite data, and model reanalyses developed by ECMWF as part of the EU Copernicus programme. Dr Schneider and co-authors convincingly demonstrate its performance over Great Britain, paving the way for many future studies into the health effects of air pollution.”

Dr Pierre-Philippe Mathieu, Head of Phi-lab Explore Office at European Space Agency (ESA), said: “It’s exciting to see data from Earth observation satellites being used in public health research to advance our understanding of the intricate relationship between health and air quality, improving lives in Great Britain, Europe and the rest of the world.”

The study is limited by the fact that the method could not reliably recover air pollution levels from years before 2008, given the limited number of PM2.5 monitors available. In addition, the performance of the model can be lower in remote areas characterised by limited coverage of ground monitoring network. The LSHTM team plans to extend this model and reconstruct high-resolution data of other air pollutants.