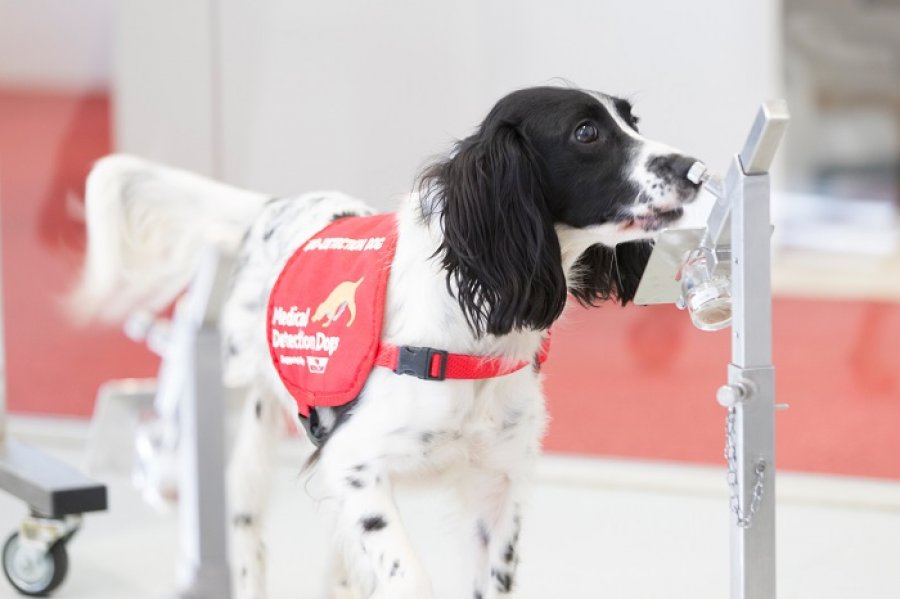 Dogs could be trained to sniff out malaria in people, potentially preventing the spread of the deadly disease, according to new research presented today at the American Society of Tropical Medicine and Hygiene Annual Meeting.

Researchers found that dogs were able to scent malaria in samples of socks worn by children infected with the malaria parasite. They say their findings could one day lead to the first rapid and non-invasive test for malaria.

Although the research is in its early stages, the scientists hope trained sniffer dogs could help to stop malaria spreading between countries and lead to infected people being spotted earlier and treated quickly.

In the study, nylon socks were used to collect foot odour samples from apparently healthy children aged five to 14 in the Upper River Region of The Gambia in West Africa.

The children were then screened to determine if they had the malaria parasite Plasmodium falciparum in their blood, using a simple finger-prick test.

The sock samples were then transported to the Medical Detection Dogs charity in Milton Keynes, UK where two dogs, a Labrador-Golden Retriever cross called Lexi and a Labrador called Sally, were trained to distinguish between the scent of children infected with malaria parasites and those who were uninfected.

In total 175 sock samples were tested – these included 30 malaria-positive samples and 145 malaria-free samples.

Professor James Logan, co-author from LSHTM, said: “Worryingly, our progress on the control of malaria has stalled in recent years, so we desperately need innovative new tools to help in the fight against malaria.

Professor Steve Lindsay, Principle Investigator from Durham University, said: “While our findings are at an early stage, in principle we have shown that dogs could be trained to detect malaria infected people by their odour with a credible degree of accuracy.

Malaria is a life-threatening disease caused by parasites transmitted to people through the bites of infected female Anopheles mosquitoes, but it can be prevented and cured.

According to the World Health Organization (WHO), since 2000 six countries have been certified malaria free, with another 12 countries reporting that no malaria cases have originated within their borders.

Identifying people infected with the malaria parasite, but not presenting symptoms, is critical as they can be treated with antimalarial drugs and the spread of the disease can be prevented.

Sniffer dogs could provide a non-invasive, portable and rapid test for identifying malaria carriers and would be particularly useful in settings where there are few individuals with malaria parasites. Confirmation of the disease would then be made by taking a finger-prick sample of blood using a rapid diagnostic test following World Health Organization guidelines.

An accompanying study introduced a fake biodetection dog to Gambian villages to gauge their acceptability, with researchers reporting that most people were favourably disposed to their use in principle.

Since the initial study a third dog, a Springer Spaniel called Freya, has also been trained to detect malaria.

Dr Claire Guest, co-author and Chief Executive Officer of MDD, said: “We have had positive results training dogs to detect diseases including cancer and diabetes sugar changes by odour. This is the first time we have trained dogs to detect a parasite infection and we are delighted by these early results.

“The possible potential to train dogs to detect tropical disease where diagnostics are poor, such as leishmaniasis and trypanosomiasis is huge. I believe that this study indicates that dogs have an excellent ability to detect malaria and if presented within an individual infected with the parasite or a piece of recently worn clothing, their accuracy levels will be extremely high. This is a reliable, non-invasive test and is extremely exciting for the future.”

Surveys of schoolchildren were undertaken by the Medical Research Council Unit The Gambia and LSHTM. Sock samples were processed before being sent to Medical Detection Dogs.

Professor Umberto D’Alessandro, co-author and Unit Director at the MRCG at LSHTM, said: “Detecting malaria-infected but otherwise healthy people is a laborious and time-consuming process that requires collecting a blood sample to be then processed in a well-equipped laboratory.

The results of the study are broadly in line with the criteria for procurement of rapid diagnostic tests.

One exciting possibility for the future is developing artificial odour sensors to detect malaria parasites, but until then trained dogs could be a useful alternative at ports of entry.

The team say further research is needed before the animals could be used in the field. This includes seeing if dogs can directly sniff out malaria in people infected with the disease and testing whether they can detect the disease in the odour of people from other parts of the world.

The authors acknowledge limitations of their research, including the low number of samples used in the study.

The research was funded by the Bill & Melinda Gates Foundation.