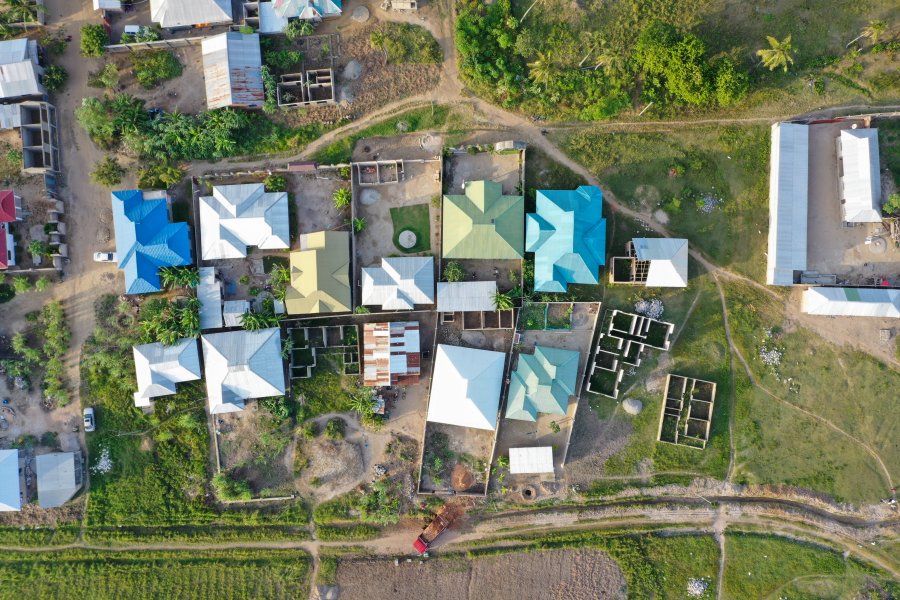 Housing with improved water and sanitation, sufficient living area and durable construction has doubled in sub-Saharan Africa between 2000 and 2015, according to new research published in Nature.

Using state-of-the-art mapping, the study, led by the London School of Hygiene & Tropical Medicine, Imperial College London and Malaria Atlas Project, University of Oxford, is the first accurate estimate of urban and rural housing quality in sub-Saharan Africa. While highlighting the positive transformation in the region, the prevalence of improved housing doubling from 11% in 2000 to 23% in 2015, the study also estimates that 53 million urban Africans (in the countries analysed) still lived in slum conditions in 2015.

Adequate housing is integral to many associated health outcomes including mental health, respiratory disease, diarrhoeal disease, and vector borne diseases, such as malaria. Addressing the housing needs of a growing population is therefore key to sustainable urban development and the health and wellbeing of millions of Africans.

The researchers say these new data will be vital to guide interventions to achieve the United Nations Sustainable Development Goal (SDG) 11 which aims for universal access to adequate, safe and affordable housing and to upgrade slums by 2030.

Lead author Dr Lucy Tusting, from the London School of Hygiene & Tropical Medicine who conducted the work while at the Malaria Atlas Project, University of Oxford, said: “Adequate housing is a human right. The housing need is particularly urgent in Africa where the population is predicted to more than double by 2050. Remarkable development is occurring across the continent but until now this trend this had not been measured on a large scale.

“These results are a crucial step to reaching sustainable development goals as quickly as possible, and show that African housing is transforming, with huge potential to improve human health and wellbeing.”

To produce these new estimates, the researchers combined data from 661,945 households from 31 countries into a model using an innovative technique that allowed the prevalence of different house types to be mapped across the African continent.

Housing was categorised using the United Nations description, where houses with improved water and sanitation, sufficient living area and durable construction were considered to be improved. Housing lacking any one of these features was considered to be unimproved.

The prevalence of improved housing was highest in countries including Botswana, Gabon and Zimbabwe, and lower in countries such as South Sudan.

The researchers also found that the housing transition may be linked to economic development. Improved housing was 80% more likely among more educated households and twice as likely in the wealthiest households, compared to the least educated and poorest families.

Senior author Dr Samir Bhatt from the MRC Centre for Global Infectious Disease Analysis at Imperial College London said: “These findings highlight that poor sanitation remains commonplace across much of sub-Saharan Africa, which may be holding back progress to improve living conditions. Our study demonstrates that people are widely investing in their homes, but there is also an urgent need for governments to help improve water and sanitation infrastructure.”

Dr Fredros Okumu, Director of Science at Ifakara Health Institute in Tanzania, and a co-author of the paper said: “The changes that we have observed are incredibly significant, especially since households mostly paid for these improvements with their own incomes and no external financing.

“From a public health perspective, this trend presents a massive opportunity for African governments to accelerate ongoing efforts against vector-borne diseases such as malaria, and to secure such gains for the long-term.”

The authors acknowledge limitations of their study including the difficulty of using a single definition to capture the full range of housing conditions across sub-Saharan Africa. The study also relied on national surveys which may not be directly comparable due to variation in their methods and data collection procedures, and which represent a limited sample of African households.

Dr Tusting was supported by a fellowship from the UK Medical Research Council to conduct this work.

Dr Morven Roberts, Head of Infections and Immunity at the MRC, said: “This key research develops a model that clearly illustrates the changes that have been happening in housing over the last 1.5 decades in Africa. Improved housing, such as better walls, windows and a roof, can have a significant impact on reducing peoples’ exposure to infectious diseases, particularly those carried by mosquitoes and other biting insects, while a concrete floor can reduce transmission of diseases that exist in soil and sand. These are positive trends, but there is no room for complacency – there are many millions of people who have yet to benefit.”