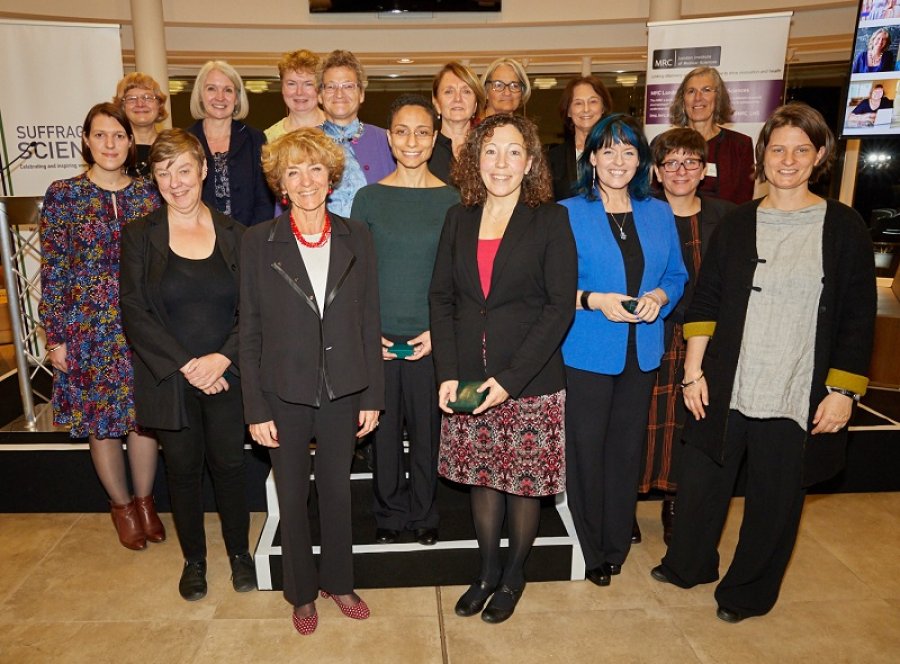 The London School of Hygiene & Tropical Medicine’s (LSHTM) Dr Ruth Keogh has been recognised for her research at an event celebrating the achievements of leading female scientists.

The Suffrage Science awards celebrate women in science. October’s awards recognised contributions from women working in the fields of maths and computing, and look to encourage others to enter science and reach senior leadership roles.

Dr Keogh was one of 11 scientists from across the UK to be selected for the prestigious award and was presented with a piece of Suffrage Science heirloom jewellery at the ceremony, which took place at the British Library.

The pieces of heirloom jewellery were designed by students at Central St Martins, who worked with scientists to design pieces inspired by research and the Suffragette movement. Every two years the holders of the jewellery choose another woman whose work they admire to pass the heirlooms on to.

Dr Keogh received a silver bangle named ‘Mathematical beauty’. The bangle is engraved with a mathematical equation and symbolises the infinite, symmetrical qualities of circles. A single, isolated pearl that can move continuously in a circular motion is encapsulated in the outer curve.

Dr Keogh was nominated by previous awardee Christl Donnelly, Professor of Applied Statistics at the University of Oxford and Professor of Statistical Epidemiology at Imperial College London.

Prof Donnelly said: “Ruth is an excellent statistician and epidemiologist.  She has pursued both methodological and applied work, with a recent emphasis on making personalised predictions of health outcomes for people with cystic fibrosis.  She is an inspiring role model demonstrating the importance of rigorous statistical thinking both through her own work and that of her students.”

Dr Keogh is an Associate Professor in LSHTM’s Department of Medical Statistics. She is currently funded by a Medical Research Council Methodology Fellowship and her interests lie in statistical methodology for the analysis of observational data, and in related applications, especially in epidemiology. Ruth’s recent work includes using data from the UK Cystic Fibrosis Registry to make dynamic personalised predictions of survival for people with cystic fibrosis and to investigate the impacts of treatments in this population. Ruth enjoys teaching on the MSc in Medical Statistics at LSHTM and supervising PhD students.

Dr Keogh said: “It is an honour to receive a Suffrage Science award and to be nominated by Christl Donnelly, a scientist who I greatly admire.

“To receive this vote of confidence from Christl gives me huge encouragement, and I look forward to passing this award on in the future.”

The Suffrage Science award is another highlight in celebrating women’s leadership at LSHTM in 2018. This year we awarded our prestigious Honorary Fellowship to three women leaders in global health and held our fifth annual Women in Health Lecture, delivered by Professor Polly Roy.

LSHTM will also be hosting the second annual Women Leaders in Global Health Conference in November, which will bring together established emerging leaders from across sectors and cultures to work towards gender equity in health leadership and to improve health for all.