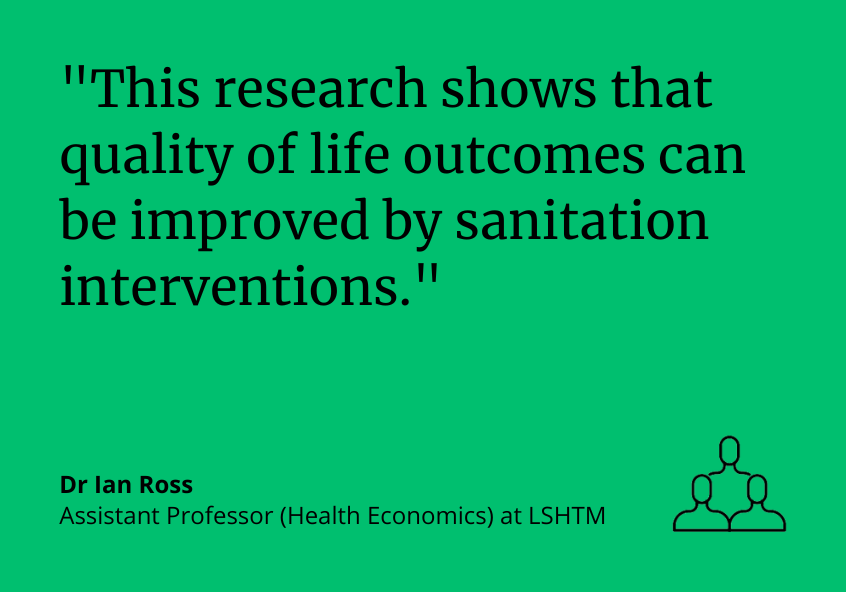 Imagine you share a pit latrine with three neighbours and you can see and smell the last user’s faeces through the drophole. Imagine people can peep through holes in the walls, which are made of old maize sacks and rusting pieces of corrugated iron. You’ve heard stories of people being assaulted on their way to the toilet at night.

Now imagine being able to upgrade your toilet to one with concrete walls, a door that locks, and a pour-flush mechanism that keeps out smells. It’s obvious your perceptions of privacy and safety might improve, and you might not feel as disgusted every time you use it. These “quality of life” benefits have long been identified as highly valuable to toilet users in qualitative studies, and users often rank them above disease prevention. However, researchers have lacked the means to measure these benefits quantitatively, and therefore to compare the relative improvements in quality of life from different sanitation options.

Our study with partners including the Instituto Nacional de Saúde, Mozambique and the University of North Carolina, published in BMJ Open, evaluates the impact of a sanitation intervention in Mozambique on sanitation-related quality of life and mental wellbeing. It is the first to evaluate the impact of an urban sanitation intervention on such outcomes using a validated multi-dimensional measure. By surveying people from the intervention and control groups of an earlier non-randomised trial, we identified substantial improvements in indices of quality of life and mental wellbeing.

The intervention we evaluated was a shared toilet programme delivered by the non-governmental organisation Water & Sanitation for the Urban Poor (WSUP). We interviewed two groups of people, those who used existing pit latrines (the control group) and those who had previously received high-quality shared toilets as part of the trial (the intervention group). Those with the high-quality toilets experienced a large gain in the sanitation-related quality of life (SanQoL) index, which comprises five questions about people’s experiences using toilets. Intervention users scored an average of 0.83 on the 0-1 SanQoL scale compared to the pit latrine group at 0.49. After controlling for confounding factors, the effect size was 1.6 standard deviations, considered very large. The intervention group had a smaller (but still statistically significant) difference in overall mental wellbeing, measuring 58.7 on the 0-100 WHO-5 mental wellbeing index, compared to 54.4 in control.

This research shows that quality of life outcomes can be improved by sanitation interventions, and comes at a time when several trials have questioned the health effects of sanitation improvements. Importantly, the new study has quantified quality of life outcomes in a robust way, demonstrating that such indices can be used to compare the relative performance of interventions, and thereby inform priority-setting. Around the world, 600 million people use a low-quality toilet considered “unimproved” by the World Health Organisation, and a further 500 million defecate in the open. By measuring quality of life and mental wellbeing in addition to disease outcomes, researchers and implementers can ensure resources are allocated to the most effective and cost-effective sanitation investments.