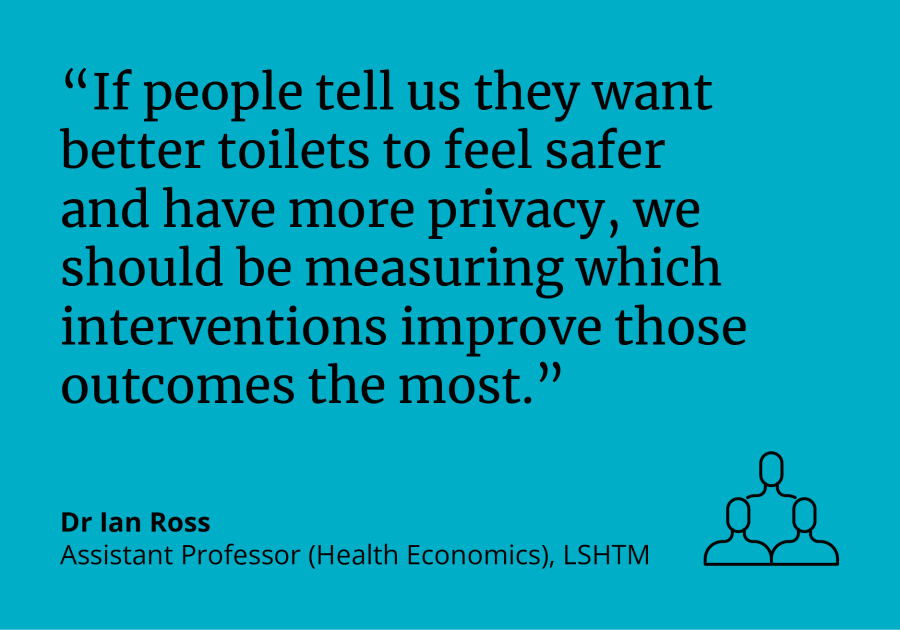 High-quality shared toilets could improve people’s quality of life and wellbeing to bring benefits beyond any reduction in infectious diseases, according to a new study published in BMJ Open. The findings highlight the need to measure quality of life and wellbeing outcomes in future sanitation evaluations to help identify more effective ways to improve people’s lives.

The research was conducted by the London School of Hygiene & Tropical Medicine (LSHTM) in collaboration with the Instituto Nacional de Saúde, Mozambique and the University of North Carolina. It evaluated an intervention delivered by the non-governmental organisation Water & Sanitation for the Urban Poor (WSUP).

The study focused on the low-income urban neighbourhood of Chamanculo in Maputo, the capital of Mozambique. Shared toilets are common in many informal settlements, like those in Chamanculo, if small dwellings do not have space for a private toilet or residents cannot afford one.

The study compared people who used higher-quality shared toilets – pour-flush toilets with solid walls and doors –  to people who used existing pit latrines. Those with the better toilets reported a large difference in sanitation-related quality of life, including reduced feelings of disgust and shame, and a small increase in general mental wellbeing, including feeling calm or cheerful. Pit latrines in this setting usually consist of a hole in the ground hidden by makeshift walls or sheeting.

The study is the first of its kind to evaluate the impact of an urban sanitation intervention on outcomes such as user-reported privacy, safety or mental wellbeing using a validated multi-dimensional measure. Known as sanitation-related quality of life (SanQoL), the measure provides a blueprint for others to compare the cost-effectiveness of different toilet options.

GHECO member, Dr Ian Ross, Assistant Professor in Health Economics at LSHTM and lead author, said: “This research suggests that quality of life outcomes can be improved by sanitation interventions, which is particularly relevant coming at a time when several trials have questioned the health effects of sanitation improvements.

“If people consistently tell us they want better toilets to feel safer and have more privacy, we should be measuring which interventions improve those outcomes the most for a given cost, as well as looking at disease. If researchers and implementing agencies start collecting data on these outcomes, in the future we’ll be better able to assess effectiveness and cost-effectiveness of the different ways to invest in sanitation.”

Co-author Professor Rassul Nala, of the Instituto Nacional de Saúde, said: “These results complement our trial finding that the same urban sanitation intervention did not reduce infection or disease.”

Inadequate sanitation facilities can have negative consequences for health beyond infectious disease as individuals are forced to use toilets that are dirty, unsafe and lack privacy, thus compromising a user’s dignity. Although previous research has highlighted this, for example through focus group discussions, until now there has not been a transferrable, evidence-based measure which integrates multiple quality of life outcomes using a small number of questions.

SanQoL outcomes include worrying about disgust, privacy, safety, health and shame. Qualitative studies find that they are often considered more important by individuals than disease outcomes, such as a reduction in diarrhoea. However, evaluations of sanitation interventions often focus on the impact on infectious diseases, aiming to assess if improved toilets have reduced disease for example, rather than exploring their effect on wellbeing or quality of life.

To assess the impact of high-quality toilets on quality of life and mental wellbeing, the researchers interviewed two groups of people, those who used existing pit latrines (the control group) and those who had previously received high-quality shared toilets as part of a non-randomised trial (the intervention group). In total, 424 households were included in the study across 272 compounds. 130 compounds were in the control group and 142 were in the intervention group.

The groups were selected in a previous trial, known as the Maputo Sanitation trial, which took place from 2015-2018. Those who received the high-quality toilets were chosen based on various criteria including the number of inhabitants in the compound; availability of space; and willingness to contribute financially to the construction of the new toilets. Most of the same criteria were applied to the control group. The trial concluded that the intervention had no effect on any measure of child health, including diarrhoea and nutritional outcomes.

SanQoL is measured a on a scale of 0-1, with higher scores equating to better outcomes. The five attributes (disgust, privacy, safety, health and shame) are weighted according to their perceived importance. Individuals answer questions such as “Can you use the toilet in private, without being seen?”, using the responses: always, sometimes, rarely or never.

The research team acknowledge limitations of the study, including the risk of selection bias due to its reliance on the previous non-randomised Maputo Sanitation trial (2015-2018). Since physical environments and sanitary conditions in these parts of Maputo are similar to large portions of other Mozambican cities, it is likely that findings could be generalisable to those settings, as well as parts of other cities in many African countries. However, the environments differ within and beyond Mozambique, and are likely to influence the relationships explored.

This work was supported by the Economic and Social Research Council through a PhD studentship. The fieldwork was funded by the Bill & Melinda Gates Foundation.