Could dog detectives sniff out malaria?

Dr James Logan, Senior Lecturer in Medical Entomology at the London School of Hygiene & Tropical Medicine and Director of ARCTEC.

Dr James Logan, Senior Lecturer in Medical Entomology at the London School of Hygiene & Tropical Medicine and Director of ARCTEC. 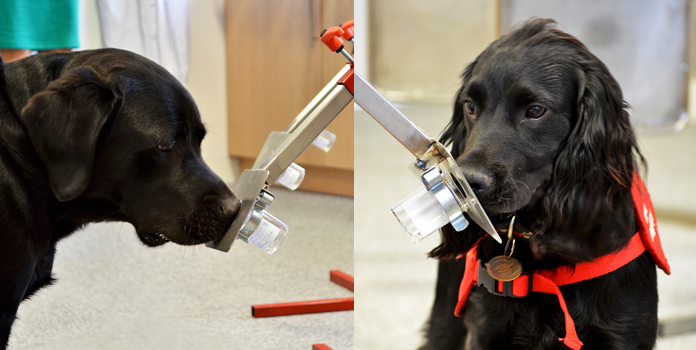 Dogs have a highly sensitive sense of smell, making them great at nosing out illegal drugs or prohibited imports. However, it’s not just crime fighting these dog detectives assist us with. They can also turn their paws to healthcare, as their noses are able to pick up on the subtle odour changes in humans when some diseases cause slight biochemical changes in our bodies.

We know that dogs can successfully detect certain types of cancer, and can even be trained to warn people with diabetes when their blood sugar levels are higher or lower than a specific range, which could cause them to enter a coma. But could dogs also be used to detect malaria?

Work in our own laboratory, and elsewhere, suggests that infection with malaria can alter a host’s smell. Pilot studies have also shown that distinctive chemicals can be detected in the breath of malaria-infected individuals. If dogs could sniff out the odour clues to identify people with malaria, they could be a new and valuable way of detecting the disease.

The Bill & Melinda Gates Foundation have awarded a £70,000 Grand Challenges Explorations grant to the School along with the University of Durham, the Medical Research Council (MRC) Unit in The Gambia and UK charity Medical Detection Dogs, to investigate the canine detection of malaria.

My team will work with the MRC Unit in The Gambia to collect urine and sweat samples from 400 Gambian children, including a proportion who are known to have malaria. The children will be asked to wear nylon socks for 24 hours, which will be used together with skin swabs to provide the sweat samples. The dogs will then be trained to distinguish between positive and negative samples using odour clues.

Currently, tests for malaria involve finger-prick blood collection and laboratory screening, and although field trials of a non-invasive breath test are underway,a novel, non-invasive method of detection that does not require blood samples or technical expertise could be of great benefit.

Dog detectives do not require a laboratory; they are portable, inexpensive, and could rapidly screen many individuals. They could be particularly useful in detecting malaria in communities where only a few people carry the parasite, since identifying these people, who are acting as ‘reservoirs’ that maintain malaria in the population, would allow us to eradicate the disease far more rapidly. In addition, once areas are malaria-free, dogs could be used at entrances to villages, communities and even countries to detect and treat people carrying the disease before entering.

Although progress on Malaria is being made it is still a huge global health problem – last year alone there were 214 million malaria cases and an estimated 438,000 deaths. Could sniffer dogs help snuff out this devastating disease? We aim to find out.

Feature: Paving the road to a malaria-free world