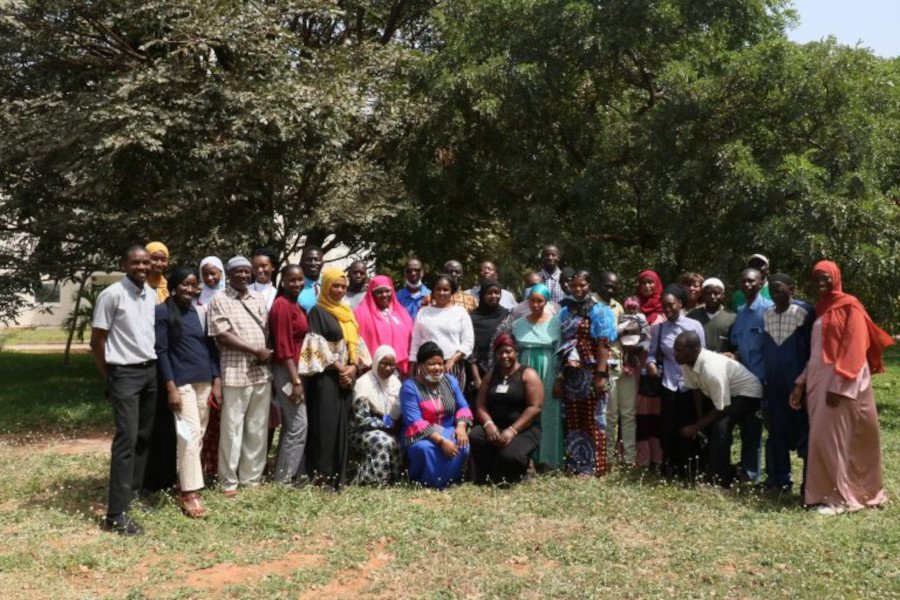 The Childhood Tuberculosis (TB) Sequel Project team at the Medical Research Council Unit The Gambia at the London School of Hygiene & Tropical Medicine (MRCG at LSHTM) has concluded a stakeholders’ meeting and capacity building training for health care workers, on “life after childhood TB”. The training, organised in collaboration with the Gambia National Leprosy & Tuberculosis Control Programme (NLTP), was held at the MRCG at LSHTM’s Fajara campus on 16th February 2022.

A total of forty-two (42) Leprosy & TB Inspectors, Nurses, and Midwives from seventeen (17) TB treatment facilities in The Gambia benefitted from the training. Participants also had the opportunity to share successes and lessons learned in the implementation of patient-centered models of TB care.

The Childhood TB Sequel Project is funded by an EDCTP2 Career Development Fellowship awarded to Dr Esin Nkereuwem, Clinical Research Fellow at the MRCG at LSHTM. Dr Nkereuwem, who was the lead facilitator of the training, stated that “Many children, despite completing treatment for TB, continue to have physical and psychosocial health needs which are related to the TB disease. There are still a lot of unanswered questions about the health and wellbeing of these children. This stakeholders’ meeting is an important opportunity to highlight these issues and to showcase the Childhood TB Sequel research currently going on in the Unit. These children deserve more attention beyond being declared ‘cured’ at the end of treatment.”

Dr Toyin Togun,  Associate Professor and Co-Director of the LSHTM TB Centre is the Principal Investigator of the GCRF Challenge Cluster for Post-TB Lung Health in Children in Africa. He is currently leading the establishment of a multi-country and inter-disciplinary platform for research on PTBLH in children in West Africa.

He said, “This training is in furtherance of the emphasis placed by the childhood TB research team of the MRCG at LSHTM on strong partnership with the Gambian National Leprosy & Tuberculosis Control Programme (NLTP) and the heath care workers at the frontline of TB control efforts in The Gambia. It is particularly gratifying to see how the training is building on quantitative and qualitative data, as well as community engagement expertise that have been generated locally in The Gambia. We are now ideally positioned to become the hub for interdisciplinary research and training in the under-researched topic of post-TB lung health in children in West Africa.”

The MRC Unit The Gambia at LSHTM has sustained a long-standing partnership with the Gambia National Leprosy and Tuberculosis Programme (NLTP), as part of the Unit’s collaborations with stakeholders in the health sector. Mr Tijan Baldeh, Deputy Programme Manager of the NLTP highlighted the significance of the engagement.

He said, “The training is very timely, and will help the healthcare workers to learn and develop new skills, enabling them to provide appropriate care when dealing with TB patients. It will also strengthen their confidence and expertise in providing support to childhood TB patients.”

Nyara Saho, a Registered Nurse at the Edward Francis Small Teaching Hospital confirmed, “The training will help us to provide better psychosocial support to TB patients and their families, and to identify some of the complications and side effects of the drugs as well.”

Yaya Sanneh, Enrolled Nurse Midwife/Leprosy TB Inspector shared similar feedback, adding that “These trainings are very significant and boost our confidence as health workers. It would be a huge step if the MRCG at LSHTM can extend these to the other regions with low TB notifications.”

The Vaccines & Immunity Theme at the MRCG at LSHTM has conducted several diagnostic and preventive studies on children with presumed tuberculosis, establishing the Unit as an internationally recognised centre for childhood TB research.

The Unit’s Vaccines and Immunity Theme Leader, Professor Beate Kampmann commended the project team saying, “I am really proud of the local team that has made such significant strides in the last years to develop a very comprehensive research and training program in childhood TB. This has proven extremely popular with our national and international collaborators, and helps to develop skills at all levels, reflecting the holistic approach we need to tackle TB in families.”