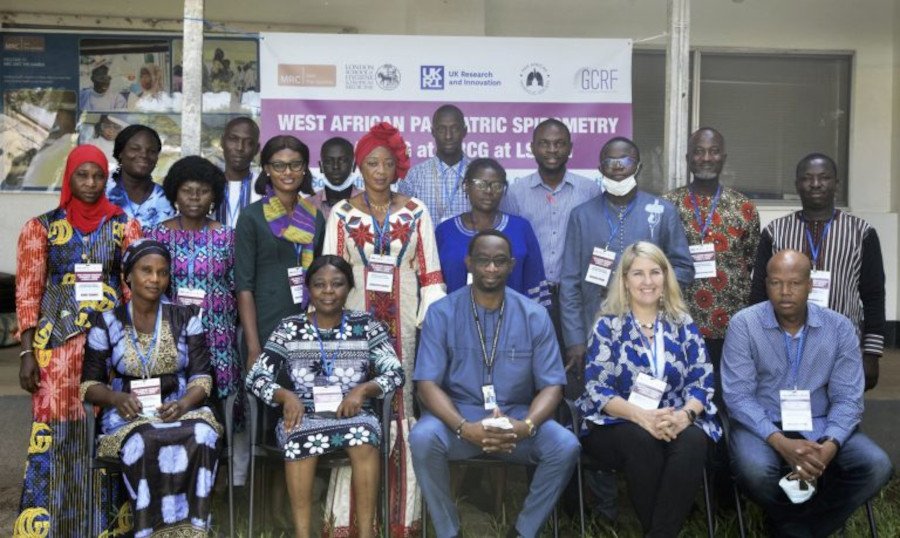 The Medical Research Council Unit The Gambia at the London School of Hygiene & Tropical Medicine (MRCG at LSHTM), in collaboration with the Pan African Thoracic Society (PATS) has concluded an intensive practical training on paediatric spirometry in Fajara.

The training, held from 11th to 15th October 2021, brought together 14 healthcare workers comprising paediatricians and senior nurses from six West African countries. Funded by the UK Research and Innovation – Global Challenges Research Fund (UKRI-GCRF), the training is part of efforts to develop the capacity and confidence of health care workers to evaluate lung function in children who have completed treatment for Pulmonary Tuberculosis.

In 2019, there were an estimated 10 million new cases of tuberculosis (TB) disease globally, and 1.5 million peoples died from TB. This makes TB one of the major causes of death by a single infectious agent worldwide. Global TB reports are based on estimates of patients who die either before or during TB treatment. However, there is now a growing body of evidence from studies conducted exclusively in adults, suggesting that patients cured or successfully treated for TB have persistent health impairment, and a relatively higher morbidity and mortality after treatment, than the general population.

While pulmonary TB accounts for at least 80% of the 1 million TB cases that occur in children aged less than 15 years, there are currently no published data about the adverse health consequences and/or long-term impacts of pulmonary TB. These include changes in the lung function in children and adolescents who have completed TB treatment in neither high- nor low-income countries, where the burden of TB disease is particularly high.

Dr Togun said, “With this project, we have developed the very first online training on paediatric spirometry that incorporated audio-visual and multimedia components in English and French. We successfully trained 2 cohorts of health care workers from six Anglo- and Franco-phone countries in West Africa with 98% completion rate for the online course. Based on credits accumulated from the virtual training, healthcare workers from the six West African countries, including The Gambia, were competitively selected, and sponsored to attend this intensive practical training on paediatric spirometry at the MRCG at LSHTM. Half of all the course participants are women.”

He added, “We have now established a multi-disciplinary network of paediatric lung health investigators, and we will utilise our multi-site platform for the establishment of prospective cohorts for clinical, epidemiological, and applied health research on post-TB lung health in children in West Africa. This will position the MRCG at LSHTM to lead efforts toward generating novel and representative data in this topical but grossly under-researched area.”

Speaking to the trainees, Professor Umberto D’ Alessandro, Director of the MRCG at LSHTM highlighted that the course will enable the trainees to objectively monitor and understand how to treat TB patients effectively. “The training is in line with the Unit’s vision and strategy to further collaborate with research institutions within the sub-region for better healthcare delivery”, he added.

In her statement, Professor Beate Kampmann, Leader of the Vaccines and Immunity Theme at the MRCG at LSHTM said: “TB is a curable disease, but that does not mean that we can ignore its physical, psychological and socio-economic long-term consequences. What happens to the lungs of children who had TB is still largely unexplored. This important training workshop will go a long way to equip healthcare professionals in West Africa with the necessary skills to investigate lung conditions.”

She added that the training is a milestone for the West African network collaborations in childhood TB and reflects the comprehensive and holistic approach the team is taking to address issues of TB for children and their families.

Mrs Lindsay Zurba, the PATS Spirometry Manager, was the lead facilitator for the training. A certified trainer, she highlighted spirometry as the most important tool in assessing post TB in patients. “This training will help us to understand and evaluate post TB lung disease in children and to provide better care for TB patients”, she stated.

Mrs Zurba was assisted by Mrs Monica Davies and Dr Esin Nkereuwem from the MRCG at LSHTM Vaccines and Immunity Theme.

The Challenge Cluster for post-TB lung health in children in West Africa brings together two multi-country collaborative projects, supported by MRC-GCRF Foundation Awards, with specific expertise in childhood TB and in lung health in Africa. The GCRF-funded partners are linked with partners in national TB programs from across Africa and members of the TB-affected communities, underpinned by key regional and international collaborative research and advocacy networks, including the Pan African Thoracic Society (PATS), International Union Against TB and Lung Disease, West African Paediatric TB Network (WApTBNet) – a sub-network within the West African Network of Excellence for TB, AIDS and Malaria (EDCTP-WANETAM), and TB Proof – a global TB advocacy organisation in South Africa.