Informing the UK response to COVID-19 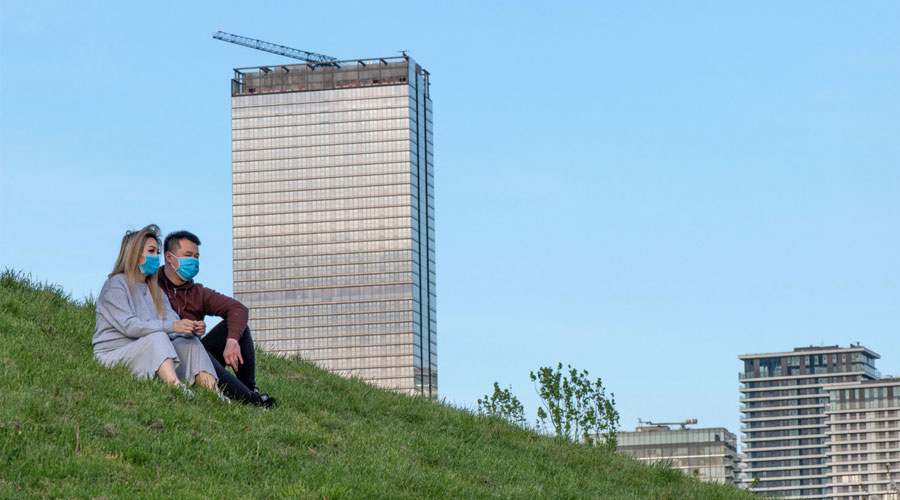 Multidisciplinary research at LSHTM was at the forefront of informing the UK response to the COVID-19 pandemic. Researchers presented key mathematical modelling and social and behavioural science to underpin government decisions such as curtailing mass gatherings, closing schools and full lockdown. These decisions avoided an unmitigated epidemic scenario of 16 to 30 million symptomatic COVID-19 cases and 250,000 to 470,000 deaths, and prevented the NHS from being overwhelmed. By tracking the R number to assess the rate of transmission, LSHTM research informed the safe easing of restrictions, reinforced by positive messaging to encourage people to comply with the measures. This case study is UK-focused, but research products and educational resources were used worldwide.

From the early days of the outbreak, researchers at LSHTM provided continuous evidence and expert advice to the UK COVID-19 response, drawing on extensive experience from studying previous disease outbreaks around the world. Due to the fast-moving nature of the pandemic and the need for quick decisions, they presented data and results to UK government advisory bodies in real time. Those intended for publication were made publicly available immediately in an online repository prior to peer review, before being accepted for publication in journals.

Modelling the epidemic and impact of restrictions

Staff in LSHTM’s Centre for Mathematical Modelling of Infectious Diseases (CMMID) developed models to simulate the COVID-19 epidemic across 186 county-level administrative units of the UK. They modelled interventions by simulating changes to contact patterns; for example, for school closures, they decreased contacts made in schools to 0, with potentially increased contact between children and older adults to reflect grandparents providing more care.

To investigate initial characteristics of coronavirus in Wuhan, researchers combined a transmission model with data of COVID-19 cases in the city, and international cases that originated there, to estimate how transmission varied over time in January and February 2020. Estimates gave the first indication of the case fatality rate, and suggested that transmission declined in Wuhan during late January coinciding with travel restrictions and control measures, critically informing UK understanding of the potential threat.

The team also modelled the impact of non-pharmaceutical interventions in the UK on cases, deaths, and demand for hospital services, including the likely requirements for non-intensive care unit (ICU) hospital beds and ICU beds over time. The team estimated that an unmitigated epidemic could result in 16-30 million symptomatic COVID-19 cases and 250,000-470,000 deaths. In this scenario, the NHS hospital and ICU bed capacity would be massively exceeded. A second scenario of shorter-term (1 week to 12 week) interventions, typically used to mitigate the burden of pandemic influenza and SARS, were found likely to be inadequate in the UK for COVID-19. ICU bed requirements would exceed availability by a factor of 10 to 30. In a third scenario, longer-term (1 year) programmes of social distancing and protecting the most vulnerable, plus periodic ‘lockdowns’ with stricter measures, had the potential to prevent exceeding NHS capacity. However, the team predicted these measures would likely need to last for at least several months.

LSHTM modellers and sociologists worked with University College London (UCL) researchers to predict the impact on transmission of schools reopening in summer 2020. Scenarios included a full- and part-time rota system of alternating attendance, each within three testing scenarios reflecting various levels of contact tracing and testing. Alongside school reopening, the model included relaxing measures across society, on the assumption these would occur simultaneously. For each scenario, they estimated the number of new infections and deaths, as well as the reproductive number (R). This was complemented by modelling which demonstrated the age-dependent effects of COVID-19 transmission, showing that susceptibility to infection in under 20s was around 50% lower than in adults over 20. Interventions aimed at children were therefore likely to have a relatively small impact on reducing transmission.

The LSHTM CoMix social contacts survey was designed to track the weekly reproduction number and regional differences through a representative sample of UK adults asked about the number of direct contacts they had on the day before each weekly analysis. Using these data, the team could predict the effect of social distancing measures, providing the first indication that the R number was driven below 1 during the first national lockdown as people observed the rules.

Combining modelling with social science insights provided evidence on measures where public behaviour was crucial to slowing transmission and reducing cases. LSHTM researchers collaborated with experts at UCL, King’s College London and Public Health England, to develop principles to inform interventions aimed at getting everyone to observe social distancing measures.

LSHTM was one of the leading UK academic groups working throughout 2020 on the COVID-19 pandemic to inform government action, continually presenting evidence to the Scientific Advisory Group for Emergencies (SAGE) and its subgroups. Its multidisciplinary analyses combining mathematical modelling with social and behavioural science were used by SAGE, the Chief Medical Officer (CMO) for England and the UK government Chief Scientific Advisor (CSA) to help formulate policy advice for the government to make evidence-based strategy decisions on virus control measures, including lockdowns, school closures and reopening, and NHS capacity.

The UK Prime Minister, in thanking SAGE members ahead of the 50th SAGE meeting on COVID-19, recognised the ‘extraordinary efforts of scientists… who have been instrumental to Her Majesty’s Government response… SAGE has provided world-leading and rigorous scientific advice which has been invaluable to decision-makers’. The CSA, in a letter of thanks to LSHTM’s Director, highlighted the continuing contribution of LSHTM individuals to SAGE by name, recognising ‘the decisive impact on the valuable scientific advice we have been providing to government through SAGE’. Medley, Academic Chair of SPI-M, was made an OBE in October 2020 for services to the COVID-19 response.

In parallel with Imperial College London models, CMMID models of a reasonable worst case scenario, exploring national-level impact of shorter duration interventions, curtailing sporting events and leisure activities, and repeated lockdown measures, were presented to SPI-M and SAGE in March 2020. This cumulative body of evidence, combined with LSHTM’s tracking of the rising R number, contributed substantially to the SAGE recommendation and UK government decision to instigate national lockdown on 23 March 2020, as well as to earlier decisions on interventions including school closures, case isolation, and curtailment of mass gatherings. This evidence was weighed by the government alongside competing political priorities influencing the timing of the decision. The evidence informed the decisions which led to quantifiable reductions in COVID-19 infections and deaths, and prevented the NHS from exceeding its capacity to cope. LSHTM CoMix data presented to SPI-M and SAGE demonstrated that the R number fell dramatically over the course of the UK lockdown from 24 March to 13 April (from 2.6 to 0.62), ensuring critical care capacity in NHS hospitals was not completely overwhelmed. The modelling suggests that the interventions imposed on the UK public prevented the 16-30 million symptomatic COVID-19 cases and 250,00-470,000 deaths which were predicted in an unmitigated epidemic.

LSHTM staff also presented evidence on the impact of relaxing lockdown measures in April and May 2020, such as reopening schools and the optimal strategy for doing so. Together with evidence demonstrating that susceptibility to COVID-19 was lower in younger age groups, R number tracking by LSHTM informed when it was safe to reopen schools, supporting the decision to partially reopen on 1 June in England.

The principles co-developed with LSHTM social scientists were presented from SPI-B to SAGE in October 2020 and underpinned communications from the government to the public on restrictions. SAGE endorsed the strategies for sustaining adherence to infection control behaviours emphasising collective identity and mutual care, and the messages were incorporated into communications to the public during the second UK national lockdown in November 2020.

Public engagement and sharing of expert knowledge were critical to increasing public knowledge of the virus and transmission, to improve compliance with restrictions and reduce case numbers. CMMID members made near-daily television appearances across the UK’s major news channels from March 2020 onwards including the Today Programme, BBC News at Ten, Newsnight, Channel 4 News and Sky News, and provided regular expert comment to online and print news outlets. Medley served as a consultant to an e-book to educate children about coronavirus and control measures, working with illustrator Axel Scheffler (The Gruffalo). Published by Nosy Crow, Coronavirus: a book for children was a winner of the FutureBook Awards: Best of Lockdown in November 2020. The book was published under a creative commons licence, which allowed free sharing, and was viewed 1.5 million times on the Nosy Crow website and translated into 63 languages. The print edition raised GBP30,000 for NHS Charities Together.

LSHTM researchers also mobilised quickly to create a Massive Open Online Course, ‘COVID-19: Tackling the novel coronavirus’ hosted by FutureLearn, to help those interested in the outbreak response and its implications around the world. The free online course ran during March and April 2020 with 236,104 enrolments from 189 countries. The course was a recommended resource by the UK Government and NHS Health England.

LSHTM handwashing and hygiene experts including Curtis established the multi-partner COVID-19 ‘Hygiene Hub’ in 2020 – a global initiative promoting sharing and learning among researchers and organisations. Between April and December 2020, the Hygiene Hub produced over 180 technical resources incorporating the latest evidence for the COVID-19 response. They were read online more than 64,000 times and LSHTM staff also provided tailored support to more than 140 organisations and governments in 60 countries.