4 December 2019 London School of Hygiene & Tropical Medicine London School of Hygiene & Tropical Medicine https://lshtm.ac.uk/themes/custom/lshtm/images/lshtm-logo-black.png
The rhetoric surrounding malaria has remained unchanged for the past few years. After halving global deaths between 2000-2015, progress has stalled. This year, there were 228 million cases globally. It is vital, now more than ever, that we galvanise political will and funding is provided for new tools, diagnostics, surveillance, and crucially a primary health care system for everyone.
Share

Mortality continues to decrease, with an estimated 405,000 deaths in 2018, compared to 416,000 in 2017. Still, this remains at an unacceptable level and children under 5 represent two thirds (67%) of the total. One of the key messages coming from WHO this year is a focus on vulnerable populations, especially pregnant women and children in Africa. When a women is pregnant she has reduced immunity, leaving her more susceptible to malaria and associated illnesses of anaemia, pneumonia, and diarrhoea. Concurrently the child is increasingly likely to be preterm or have a very low birth weight, which are contributing factors in infant mortality. In 2018, an estimated 11 million pregnant women living in 38 countries with moderate-to-high transmission in sub-Saharan Africa were infected with malaria (29% of all pregnancies). Malaria-incidence in the most-at-risk populations must be at the forefront of our efforts.

Significant work is underway to address child mortality in the Sahel sub-region. Starting in 2015, researchers at LSHTM rolled out seasonal malaria chemoprevention (SMC) consisting of preventative malaria therapy during the high-transmission rainy season. It is now recommended by WHO as an effective form of treatment. In 2018, of the 31 million children living in SMC-eligible areas, 19 million (62%) were given SMC. The main gaps in treatment were in Nigeria (70%, 8.4 million), Chad (67%, 1.8 million), Ghana (66%, 0.7 million), Senegal (0.7 million, 100%) and Gambia (47%, 0.1 million). All targeted children received treatment in Cameroon, Guinea, Guinea-Bissau, Mali and Senegal. Further research is expanding to encompass more countries in this region and children of different age groups. 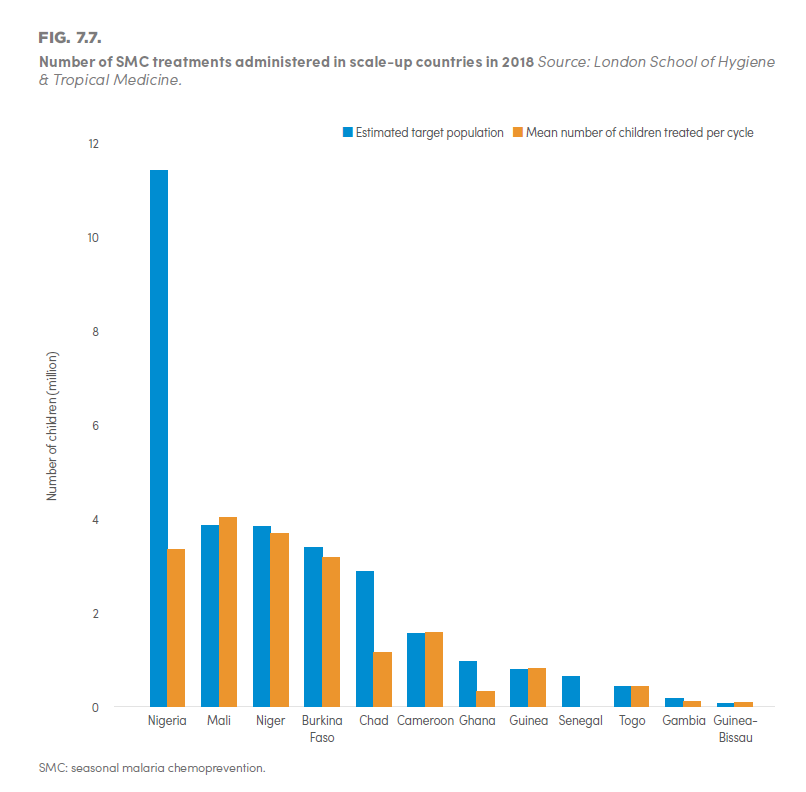 "Despite tremendous progress over the last 20 years, resulting in an estimated 100 million malaria cases prevented in 2018, the World Malaria Report highlights some important gaps that remain. In the most malarious countries in Africa, we are still facing a situation where 39% of children do not sleep under a mosquito net, 36% of children with fever receive no medical attention, and 69% of women do not receive adequate malaria prevention during pregnancy. Whilst the proportion of children using insecticide-treated nets has increased from 26% in 2010 to 61% today, the success of other preventive interventions, including the new malaria vaccine, are more dependent on universal access to a well-functioning health system. To achieve further progress in Africa, these aspects will require increased attention."

Identifiable gaps clearly remain in the fight against malaria - most worringly the minimal progress shown in child mortality and increase in cases throughout the Africa region. However, if reinvigorated funding is achieved and a holistic approach is taken, significant reduction could be within reach. To read the full report, please click here.