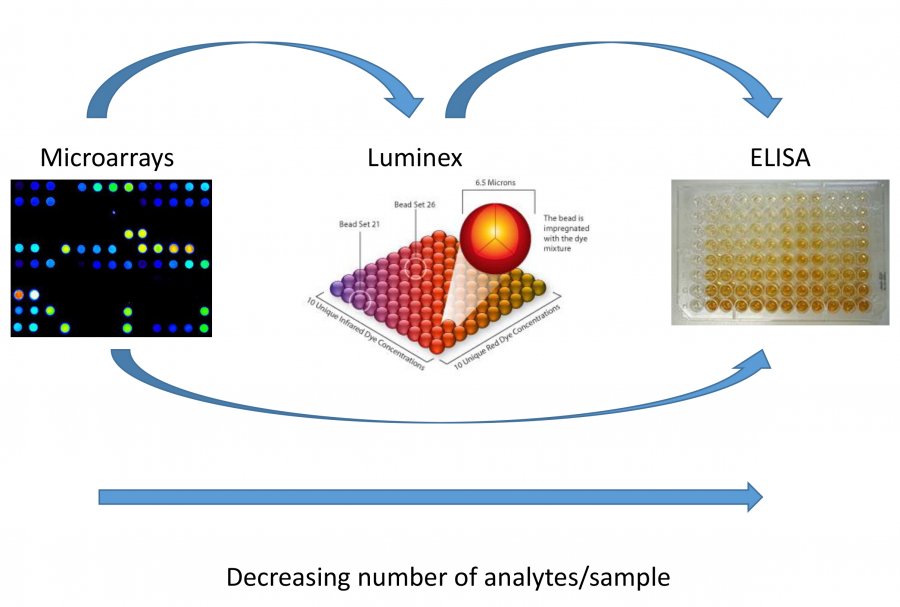 Figure: The purified protein microarray: A platform for the triage of putative serological tools?

Several thousand years ago, Nergal, the Babylonian god of war and pestilence, was once attributed as the cause of malaria, and in eight of his plays Shakespeare called it the 'ague'. Malaria has been known by a lot of names but common to all has been the debilitating and fatal aspects of the disease.

Although the reach of malaria has shrunk in recent times and may no longer represent one of the top three infectious disease killers, it still exerts a significant health burden on low to middle income endemic countries. Over the past two decades, researchers from the Malaria Centre have helped to demonstrate that the “visible” impact of malaria infection was, in fact, only the tip of the iceberg, and contributed to a pivotal shift in the priorities for malaria elimination.

Brian Greenwood showed in 1987 that despite the potential severity nature of malaria infections, over 75% of infections detected during community surveys are asymptomatic, characterised by low-density parasitaemia and the absence of clinical symptoms. However, in a PLoS Medicine policy forum, Eleanor Riley and her team presented evidence that these are in fact chronic infections that impose a significant health and societal consequence on the affected population. Teun Bousema, together with colleagues from the Malaria Centre, described the burden of these submicroscopic malaria infections across different endemicities in Ethiopia for both Plasmodium falciparum and P. vivax. These studies were in contrast to previous assertions that asymptomatic infections may be beneficial to the host.

In addition, such sub-microscopic infections represent a major transmission reservoir that needs to be addressed in community interventions. However, due to the low-density parasitaemia, these are not always detectable by the traditional RDT approaches. Research teams at the London School of Hygiene & Tropical Medicine have developed several tools to improve detection of sub-microscopic infections. Instead of detecting parasite antigens, the Luminex multiplex platform is used to identify the presence of anti-parasite antibodies and allow the discrimination between current and past infections. This versatile platform is also used for the molecular detection of red blood cell polymorphisms and drug resistance markers by Lynn Grignard and Chris Drakeley.

Multiplex platforms such as the protein microarray and the Luminex multiplex assay have proven to be powerful platforms for the agnostic screening of serological samples and the identification of potential diagnostic and protective biomarkers. To this end, research led by Kevin Tetteh has developed a recombinant protein pipeline to aid the characterisation and development of informative protein targets for both malaria and non-malarial diseases. A subset of these reagents has been used to develop Luminex-based approaches to determine recent versus historical malaria exposure in a range of endemicities.  These regents have also been used by Lotus van den Hoogen to develop a new recombinant protein microarray assay to monitor the development of immunity in controlled human malaria infection studies.

This overview is not intended to be exhaustive but instead provides a snapshot of current research aimed at tackling the hidden burden of malaria.