We conduct research to understand how community participation, patient involvement and dialogue with citizens can promote health and quality improvement of health services. DEPTH has been advancing knowledge in the field of participation in health for well over a decade, with our influential work incorporated into global guidelines including the Global Strategy for Women’s, Children’s, and Adolescents’ Health.

Patient-centred care relies on understanding health experiences from the perspective of the patient. We believe that ‘co-production’ is key to improving health promotion and healthcare. Our research explores meanings of co-production, and how these meanings help new forms of knowledge and relationships emerge in healthcare settings. One of these ways is through ‘slow co-production’, which you can find out more about here.

We bring a strong track record in co-production work in sexual and reproductive health and rights, including collaborative work with young people, refugees, people with disabilities, and LGBTI people. Find out more in DEPTH examples.

Patient-centred care relies on understanding quality improvement and health experiences from the perspective of the patient. 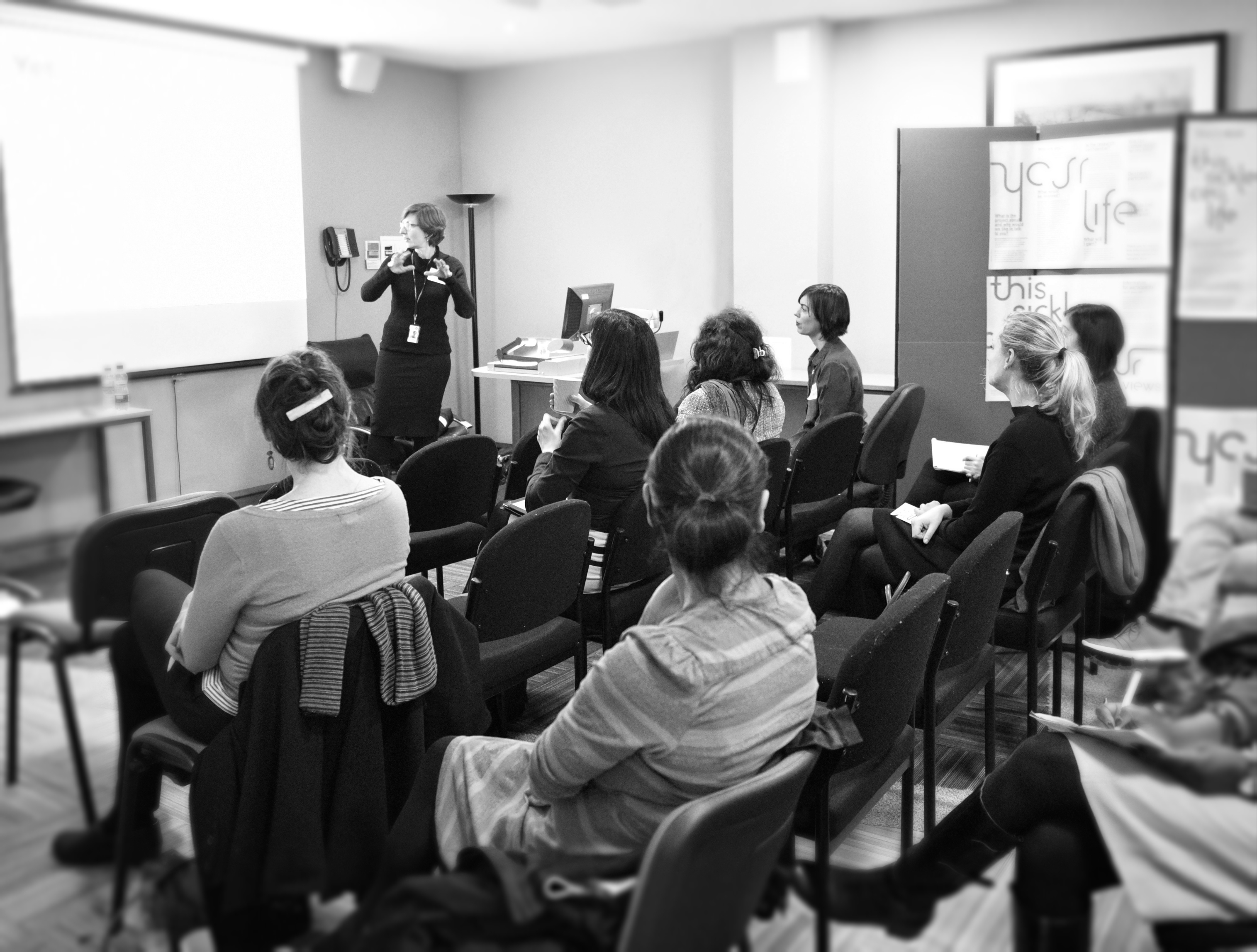 Patient-centred care relies on understanding quality improvement and health experiences from the perspective of the patient. “Co-production” is increasingly seen as best practice when involving patients in healthcare. Our research explores meanings of co-production, and how this emphasis is beginning to give way to new emerging forms of knowledge and relationships in healthcare settings. One of these ways is the idea of “slow-coproduction”, an idea we explore in this paper.

We adopt a critical approach to understanding how different groups (e.g. young people, marginalised groups) can participate in health, health promotion and research. We do this by attending to socio-psychological, spatial and cultural dimensions of patient involvement and engagement, which are both unexplored in the literature and often neglected in participatory interventions. Our research focuses on creating an environment that enables communities to participate in improving health.

DEPTH develops in-depth empirically-driven theory on participation in health, with a specific focus on what works and why when involving patients and citizens in healthcare service improvement and research. We adopt a critical approach to understanding how different groups (e.g. young people, marginalised groups and others with less heard voices) can participate in health. We do this by attending to socio-psychological, spatial and cultural dimensions of participation, which are unexplored in the literature and often neglected in participatory interventions. Our research focuses on creating an environment that enables communities to participate in improving health.

Space has been an important concern in our study of participation. We have conceptualised participation as a spatial practice with material, social and temporal dimensions. We paid attention to the nature of the spaces created for patient involvement and to how spatial dimensions shape participation. We looked into how through their participation citizens shape these spaces to try to increase their impact on healthcare. Paying attention to spaces opened new ways to think about participation as a space to negotiate citizenship rights. We asked; how is citizenship in health practiced and negotiated by people involved in participatory initiatives? How much of this citizenship in health is built spatially? We asked: What are the necessary social and spatial conditions for influence and activism in health? In our ethnographic fieldwork, we examined how citizens negotiate their right to claim quality healthcare via spatial practices (for example via their tactics to navigate and influence highly bureaucratic and formal participatory spaces created for patient and public involvement within the UK National Health Service).

We have also paid attention to relational dimensions of participation. Participation involves social relationships between different people, each bringing their own social identities and forms of knowledge to the participatory space. This can bring transformative possibilities but also friction and clashes between the different identities and forms of knowledge. We conceptualised how the identities of an active citizen (with the right to claim quality of care) are developed, enacted and negotiated through participation and in relation to healthcare providers’ views on participation and their interactions with participants. Identities are important, because they affect how participants see themselves and ultimately influence how participation works in practice.

We have conceptualised participation as the encounter between the different types of knowledge brought by different partners; for instance the experiential & embodied knowledge of service users and the biomedical and evidence-based knowledge of clinicians. Through our work we have generated critical insights into how new forms of knowledge for health improvement emerge from dialogue and co-production between members of the public and healthcare service professions and researchers.

Recent examples of our co-production approach

This Sickle Cell Life was a participatory qualitative research project exploring young people’s lives and experiences of sickle cell disorder. The project was co-produced with patient advocates and explored how young people experienced transitions from paediatric to adult healthcare services and how these intersected with other transitions to adulthood. Our aim was to offer a much-needed sociological picture of how a young person with sickle cell navigates their life and their future, to provide context and detail lacking from the more extensive clinical and quantitative research that has been published about the condition.

The research was co-produced, and members of the DEPTH team worked extensively with three co-researchers: two young people with sickle cell and a person who cared for someone with sickle cell. They collaborated with the DEPTH team throughout the study, from inception through to getting the results into policy and practice to improve services.

Partnering with expert co-researchers was crucial: they provided essential context and lived experience, and helped to ensure that we asked the questions that would address the concerns of people with sickle cell as well as those of healthcare providers and policymakers; they also worked with us on analysis throughout, sense-checking and deepening the findings. Co-producing the work in this way was vital to ensure that community and patient perspectives were centred during study design, data analysis and knowledge translation (e.g. contributions to intervention design).

Findings from This Sickle Cell Life have taken on a life of their own – along with our research dissemination activities (including academic works, blogs, twitter threads, and lay-friendly summaries) findings have been taken up and disseminated far more widely than we had originally anticipated, without our explicit involvement and using funding obtained separately. Co-researchers, patient experts, and many other participants who engaged with the project during its formal activities (including dialogues and workshops/events) have subsequently played a crucial role disseminating the findings both nationally and internationally across their networks, taking pride in their involvement and finding creative opportunities to lobby for better care, and to get the findings into practice.

Ways this has happened are exemplified by our engagement ‘dialogue’ event which was a workshop/presentation event near the end of the project where we presented the preliminary findings to key stakeholders, including young people, healthcare providers, and representatives from NHS England. The event was specifically designed to be highly interactive, and involved group work to co-produce recommendations for action, asked attendees to make pledges of how they would take action after the event, and brokered conversations and relationships that led to further community projects and meetings with various stakeholders about the implications of our findings for practice.

We published six peer-reviewed works from the project in high quality, international academic journals. All our work was enriched by the collaboration and participation elements, including co-authoring academic work with the patient and carer experts who had been involved in the project from the start.

The project was well received by people with sickle cell and their advocates, as well as clinicians. Members of the DEPTH team project were nominated for the Royal College of Paediatrics and Child Health &Us Voice Champion Award for the quality of their participatory work.

Save the Children developed a patient charter, and then deployed to Bangladesh where there is low written literacy among the refugee population. DEPTH team member Dr Catherine McGowan and colleagues took the patient charter into the refugee community and asked refugees and host communities to collaborate with staff to help develop a visualisation of the charter so it would be more culturally appropriate, localised, and accessible.

Communities inputted into the visual charter and shaped its final form, advising on crucial cultural dimensions and other nuances in the images. The patient charter is now used in a range of complex and challenging refugee/host community settings.

In the qualitative component of the East London Project - a multidisciplinary, participatory research project - we sought to explore and document how sex work-related laws, enforcement and other social-structural influences shaped sex workers’ safety, health and rights. The DEPTH team and other colleagues worked with freelance co-researchers who had lived experience of sex work or of working with sex worker advocacy or support organisations, to design, conduct, analyse and disseminate the results of the research.

Following collaborative learning sessions, during which we discussed, refined, and piloted our methods, university staff and co-researchers worked together to recruit participants, conduct fixed-site and walk-along interviews, analyse data and disseminate findings, with regular team meetings to plan and adapt the research. Co-researchers with greater availability became more involved in analysis, writing, dissemination and decision-making, including in relation to resource allocation for remaining fieldwork and analysis. The project was steered by an advisory group which included sex workers, activists, residents, service providers, local authority and police representatives and academics.

Co-researchers and university staff co-presented and sought feedback on preliminary findings and recommendations at an academic conference and three community events in each of the study boroughs. During the latter events, attended by study participants as well as other sex workers, service providers, police, and policy makers, we placed particular emphasis on hearing from participants and other sex workers. We used anonymised notes from these events to inform project outputs.

Through this participatory approach, we sought to acknowledge and challenge hierarchies of knowledge production about sex workers’ health and related epistemic exploitation (Berenstain, 2016), while acknowledging remaining power imbalances of a multidisciplinary research grant held by university-employed staff. In an upcoming publication led by one of the co-researchers, we reflect on the tensions, complexities, limitations and potential of this participatory approach (Stuart et al, forthcoming)

European harm reduction equipment and materials for people who use drugs

By involving people who use drugs, service providers, clinicians, and academics in relevant throughout the project, we co-produced localised guidance for the provision of harm reduction equipment.