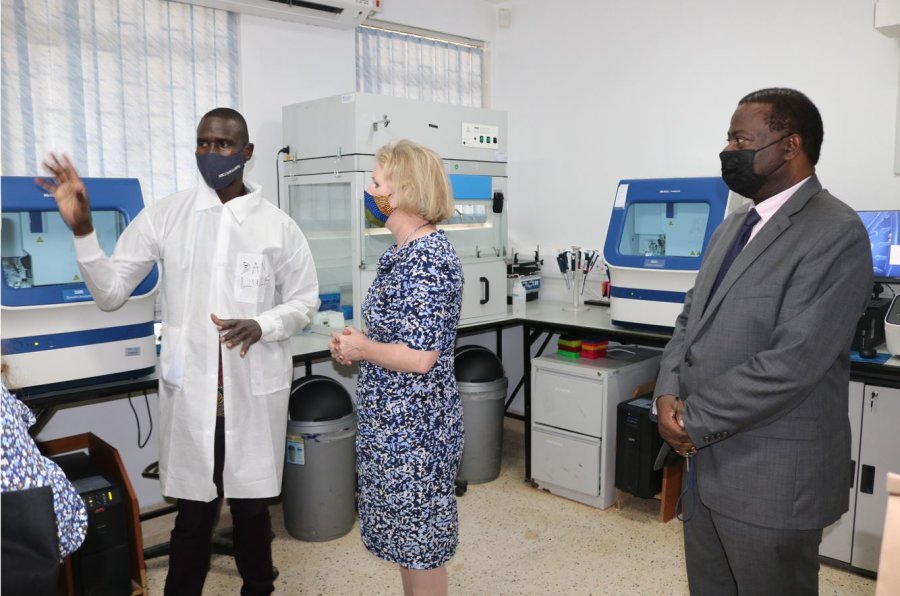 On Wednesday 19th January 2022 the UK Minister for Africa, Latin America and the Caribbean, Vicky Ford visited the MRC/UVRI and LSHTM Uganda Research Unit following a three-decade collaboration between the United Kingdom and the Ugandan Governments aimed at combating pandemics through medical research. During the visit, Ford was accompanied by the British High Commissioner to Uganda, Ambassador Kate Airey and a team from the British Consulate.

While at the Unit, Ford visited the state of the art science laboratories at the Unit like the Immunology Lab where researchers are studying how people respond to vaccines, SARS-CoV-2 Sequencing labs as well as the Biobank that houses an unmatched collection of research samples with approximately 600,000 “legacy samples” stored in over 60 Freezers.

The tour was led by the Unit Director Prof. Pontiano Kaleebu and the Chief Operating Officer Dr. Jonas Lexow accompanied by other Research Leaders at the Unit like Prof. Moffat Nyirenda, Prof. Allison Elliot among others.

Ford was impressed by the commitment and dedication by the Unit in conducting medical research and engaging communities about the deadly diseases like HIV/AIDS, Ebola, Bilharzia and the recently discovered Corona Virus Disease. This was emphasized by her tweet as immediately posted on her Twitter handle.

Prof. Pontiano in his welcome message to the UK Minister expressed his gratitude to Ford for choosing to visit the Unit. He also thanked the UK Government for funding the operations of the Unit through the UK Research and Innovation (UKRI), Medical Research Council and the London School of Hygiene and Tropical Medicine.

The Tour in Pictures