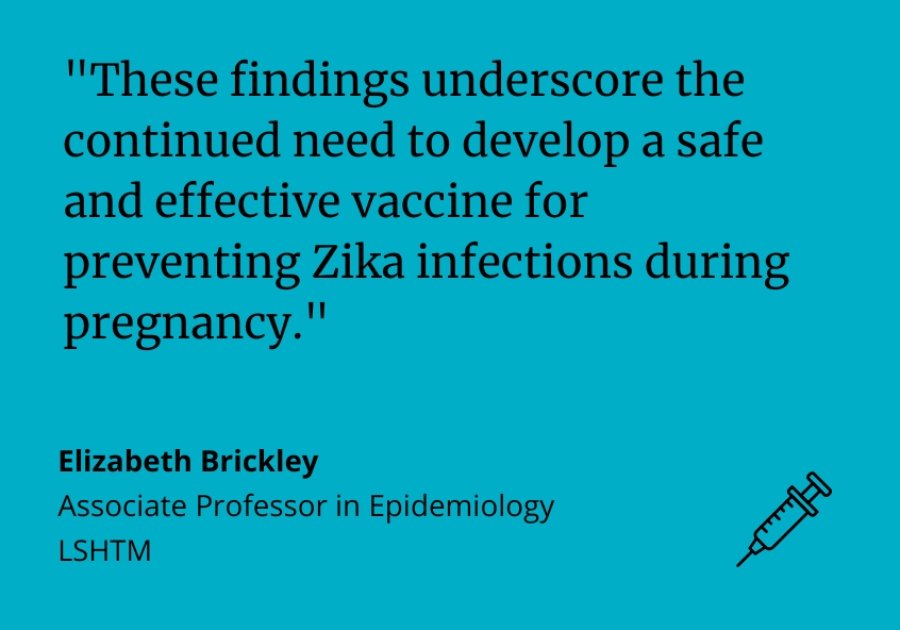 Approximately one third of children born to mothers infected with Zika virus during their pregnancy present with at least one abnormality consistent with Congenital Zika Syndrome in the first years of their life, according to new research.

The findings — based on the pooled analysis of 13 studies investigating paediatric outcomes among over 1,500 pregnancies affected by Zika virus during the 2015–2017 epidemic in Brazil — improve our understanding of the risks associated with prenatal Zika virus infections, with important public health implications.

Following the emergence of a microcephaly epidemic in Brazil in 2015, the possibility of an association between increased transmission of Zika virus and potential birth defects emerged.

Although studies have investigated potential adverse pregnancy outcomes following infection, small sample sizes, high variability between estimates and reliance on routine surveillance data have limited our understanding of the true extent of this risk.

In this study, the team — including researchers from 26 institutions in Brazil and the London School of Hygiene & Tropical Medicine (LSHTM) — analysed data on the offspring of 1,548 pregnant women from 13 cohort studies in the Zika Brazilian Cohorts Consortium. These data comprise all four regions in Brazil affected by the epidemic between 2015 and 2017, with prenatal infection confirmed in the laboratory using genetic testing and potential adverse outcomes assessed at the individual level and harmonised across studies.

Overall, the most frequently observed manifestations of Congenital Zika Syndrome among the children included functional neurological impairments, neuroimaging abnormalities, alterations in hearing and vision, and microcephaly.  The results provide evidence that the congenital abnormalities were more likely to present in isolation, with less than 0.1% of exposed offspring experiencing two abnormalities simultaneously.

Risk of offspring presenting with microcephaly — a neurological condition whereby the baby’s head is smaller than expected for their age and sex— was found to be approximately 2.6% at birth or when first evaluated, increasing to 4.0% across the early preschool years. This risk remained relatively consistent across study sites, with no apparent variation according to socioeconomic conditions.

The research is published in The Lancet Regional Health – Americas.

Lead author Professor Ricardo Arraes de Alencar Ximenes, from the Federal University of Pernambuco in Brazil commented: “These results highlight the importance of having multi-disciplinary health teams available near the time of birth to evaluate children with prenatal exposure to Zika virus exposure and to refer them, as needed, to specialized follow-up care that can provide support for known disabilities and diagnosis of late manifestations.”

Co-author on the study and Associate Professor of Epidemiology at LSHTM, Dr Elizabeth Brickley,  also said: “These findings underscore the continued need to develop a safe and effective vaccine for preventing Zika virus infections during pregnancy.  While gaps in population level immunity to the virus persist, the threat of a Zika virus re-emergence remains a concern for public health.”

Looking forward, the researchers emphasize that additional studies with longer follow-up times will be needed. Potential avenues for investigation include assessing the risk of hospitalization and death for children with microcephaly as they age, and in those without microcephaly, examining risks of other complications, such as those linked to behavioural or neuropsychomotor development.