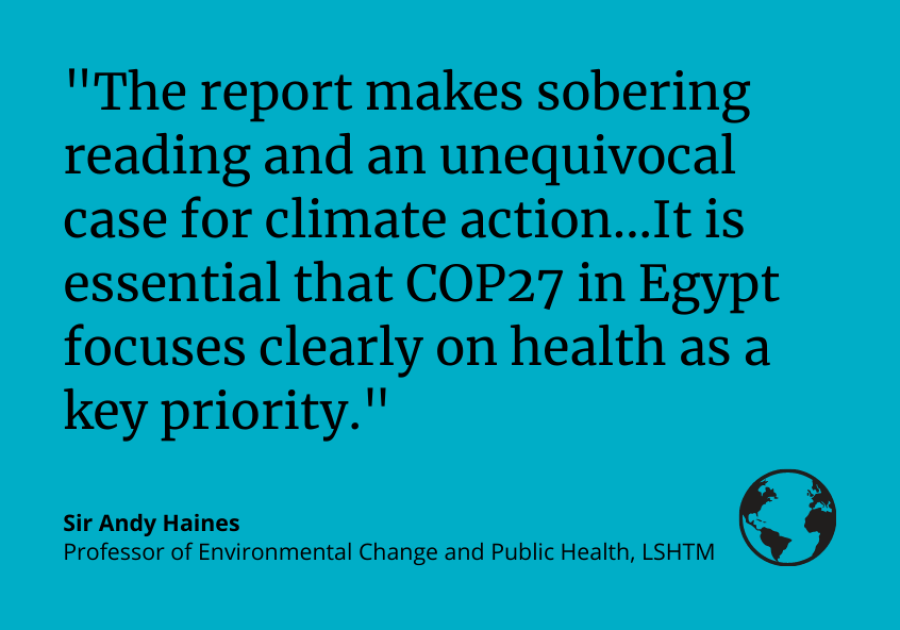 The IPCC report warns many of the impacts of global warming are now irreversible, and humans and nature are being pushed beyond their abilities to adapt.

Sir Andy Haines, Professor of Environmental Change and Public Health at LSHTM, commented on these findings.

Professor Haines said: "The IPCC Working Group 2 report Summary for Policymakers documents robust evidence of wide-ranging impacts of climate change, causing increasingly irreversible damage to ecosystems on land, freshwater and the oceans. The scale and size of climate change impacts are larger than estimated in previous assessments. Even under a low greenhouse gas emission scenario the Paris Agreement target of 1.5 degrees C temperature increase will be exceeded in coming decades.

"The report provides compelling evidence that health is being affected currently through a range of pathways including, extreme heat, water-borne and food-borne infectious diseases, vector-borne diseases, air pollution from wildfires and effects on nutrition from decreases in the yield and nutritional quality of crops. Extreme events including floods, droughts and wildfires impact both mental and physical health. There is now high confidence that climate change is contributing to humanitarian crises where climate hazards affect vulnerable populations. In all regions, but particularly small island states, climate and weather extremes are increasingly driving displacement of populations. About 3.3 to 3.6 billion people are highly vulnerable to climate change because of the location and circumstances in which they live.

"The report makes sobering reading and an unequivocal case for climate action, both adaptation to reduce the effects of climate change that cannot be prevented and mitigation, to cut the emissions of greenhouse gases that are responsible for climate change.

"While adaptation actions - such as early warning systems for extreme heat and infectious diseases - can reduce the effects on health, there will be limits to adaptation and deep cuts in emissions with the aim of achieving net zero emissions by 2050 at the latest are essential to protect health.

"Protecting and improving health are generally peripheral to climate change policies and negotiations. Its is essential that COP27 in Egypt in November focuses clearly  on health as a key priority."