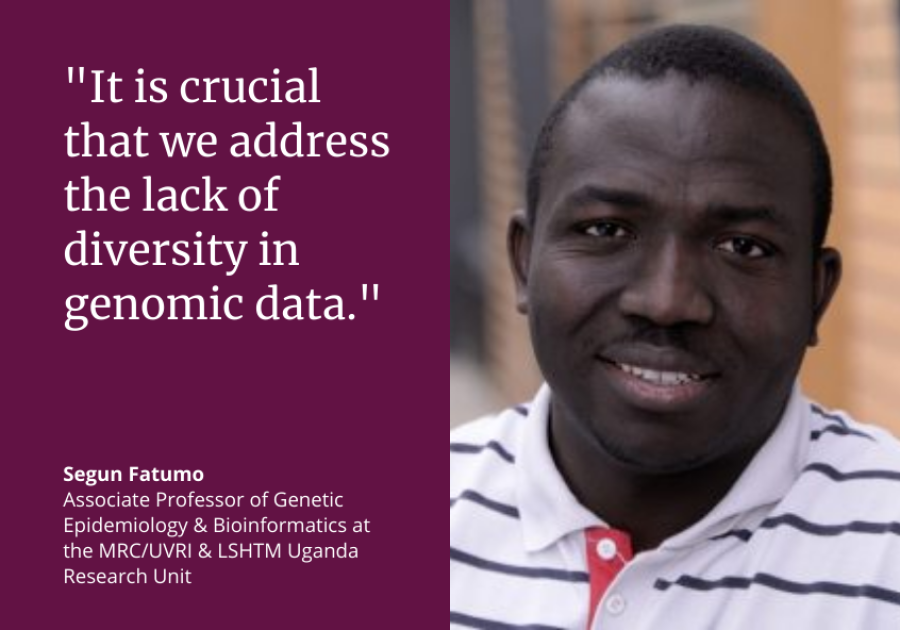 The lack of diversity in genomic research could mean Africans are missing out on potential life-changing care for chronic health disorders, according to a new study published in Nature Medicine.

These genetic risk scores are thought to revolutionise medicine by making it possible for people to receive treatments in line with their genetic make up, as well as for early identification and prevention of diseases. However, due to the small numbers of genetic studies involving African people, there is not currently enough information to create accurate genetic risk scores to predict their vulnerability to illnesses such as heart diseases.

The study, led by researchers from the MRC/UVRI and the London School of Hygiene & Tropical Medicine (LSHTM) Uganda Research Unit  in collaboration with those from the University of Witwatersrand in South Africa, used genetic data from 1.4 million people of diverse ancestry across sub-Saharan Africa to examine how the use of diverse and representative data can impact our ability to predict disease risk.

The team found that when genetic data from the African American population was included in genomic studies, the genetic risk score estimates were five times more accurate for people with African ancestry, compared to when data from European ancestry was used.

African Americans only comprise 1.1% of global genomic studies. These findings emphasise the importance of including Africans’ genetic information in genomic studies in order to gain more accurate information about genetic risk factors for disease, and better control the growing trend of chronic health disorders in Africa.

Segun Fatumo, Associate Professor of Genetic Epidemiology & Bioinformatics at the MRC/UVRI and LSHTM Uganda Research Unit said: "Currently, genomic studies include primarily individuals with European ancestry. This means genetic risk scores in predicting risk of disease, while applicable to the European population, is not accurate or reliable for those of African ancestry. It is crucial that we address this lack of diversity in genomic data. More genomic research is required to produce genetic risk scores that are relevant and representative of the genetic diversity in African populations due to age, lifestyle, environment, and other genetic factors."

Researchers used data from Uganda and South Africa to gather genetic information using genetic risk scores to identify people within continental African populations with high and low fat levels. Their findings identified a number of inherent features in African populations, including that the genetic risk scores were more accurate for people living in urban settings in South Africa than for those in Uganda, due to differences in age, lifestyles, environments and genetics.

Additionally, by including well-known risk factors, such as age, gender, body mass index (BMI) and type 2 diabetes in the estimation of genetic risk scores, the classification of people with either high or low risks improved by 42%.

This was in contrast to conventional risk factors reported in European-based studies such as age, gender, and body mass index as significant contributors to identifying people with high and low fat levels. These findings also demonstrate that a standard genetic risk score cannot be applied across different ethnicities and nations in Africa due to genetic variability and other factors which affect risk  such as age, lifestyle and environment.

Early diagnosis and treatment is one of the best ways to reduce the chances of developing chronic diseases such as heart and blood vessel disorders. The lack of diversity in genetic studies, and those that include African people in particular, has slowed progress in calculating individuals’ susceptibility to illnesses, which in turn slows their path to diagnosis and treatment.

Although genetic risk scores are not extensively used by health professionals at the moment, the researchers believe these findings provide hope for enhancing clinical care in Africa. Knowing how likely an individual is to get a disease could help them take preventative steps to diagnose it earlier, when it is easier to treat, or even cure. According to the researchers, this is crucial for detecting those who are at risk of having high levels of body fat in the future.

Dr Tinashe Chikowore, from the University of the Witwatersrand and an author of this study, said: "Advocating for greater diversity in genetic studies will guarantee that Africa is not left out of future precision medicine initiatives, which are crucial in identifying people who are more or less susceptible to contract chronic infections."

The research study was funded by the Medical Research Council and the Wellcome Trust.