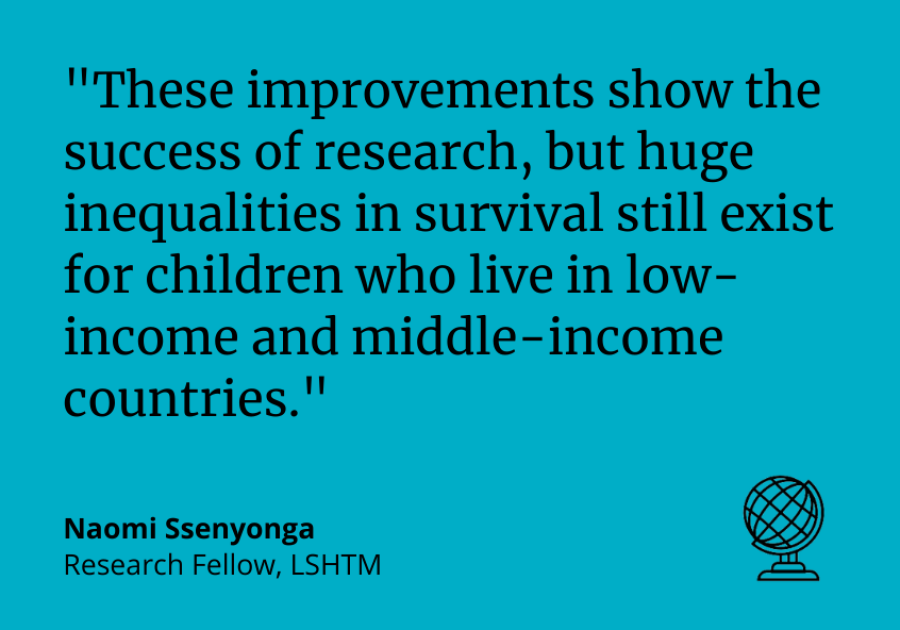 Children (0-14 years) diagnosed with leukaemia have benefited from decades of research to improve outcomes, and their five-year survival has increased more than that of adolescents (15-19 years) and young adults (20-24 years), suggests new research published in The Lancet Child and Adolescent Health.

Cancer in young people (aged 0–24 years) is rare, but the full extent of the burden is often unknown, especially in low-income and middle-income countries. Researchers at the London School of Hygiene & Tropical Medicine (LSHTM) and their collaborators in the CONCORD Working Group have estimated worldwide trends in survival from the different types of leukaemia in children, adolescents and young adults.

They analysed anonymised patient records provided by 258 cancer registries in 61 countries that participated in the third cycle of the CONCORD programme. Trends in survival five years after diagnosis were compared, using data for 164,563 children, adolescents and young adults who were diagnosed with leukaemia during 2000-2014.

For all types of leukaemia combined, five-year net survival during 2010–2014 in children ranged from 48% in India to 91% in Puerto Rico, whereas in adolescents, survival ranged from 24% in Colombia to 85% in Denmark, and in young adults, from 20% in Ecuador to 86% in Ireland.

In Europe, survival for all leukaemias combined varied widely. Five-year survival for children diagnosed during 2010-2014 was 85% or above in most countries, but was still below 60% in parts of Eastern Europe (Romania 58%). For adolescents, by contrast, survival was above 80% in only a few countries in Northern Europe (Denmark 85%, Lithuania 81%). For young adults, survival also differed widely, from 86% in Ireland to 38% in Estonia. In the UK, five-year survival for all leukaemias combined for 2010-2014 was similar to that in other countries in Northern and Western Europe: 88% in children, 76% in adolescents and 75% in young adults.

Naomi Ssenyonga, first author of the study from LSHTM, said: “Research to improve outcomes for children with cancer has led to higher survival, particularly in high-income countries, where most children with leukaemia have been enrolled in long-running series of clinical trials for many years.

Claudia Allemani, Professor of Global Public Health at LSHTM, and the senior study author, said: “The results of this study offer the first worldwide and the most-up-to-date comparisons of population-based survival between children, adolescents and young adults with leukaemia. Exploring trends in survival is an important indicator of the overall quality of cancer management in a country’s health system. Lasting progress in survival demands investment in the human and financial resources that are required to manage and treat all young people with cancer more effectively. These investments will eventually translate into better outcomes overall.”

The authors acknowledge some limitations, especially the scarcity of data from sub-Saharan Africa. Nevertheless, this study offers the most up-to-date information on world-wide trends in survival for young patients diagnosed with leukaemia. The Cancer Survival Group will shortly call for data for CONCORD-4, updating the global surveillance of trends in survival to include patients diagnosed during the period 2000–2019 (or later, where data are available).