Urgent need for vaccine to prevent deadly Group B streptococcus 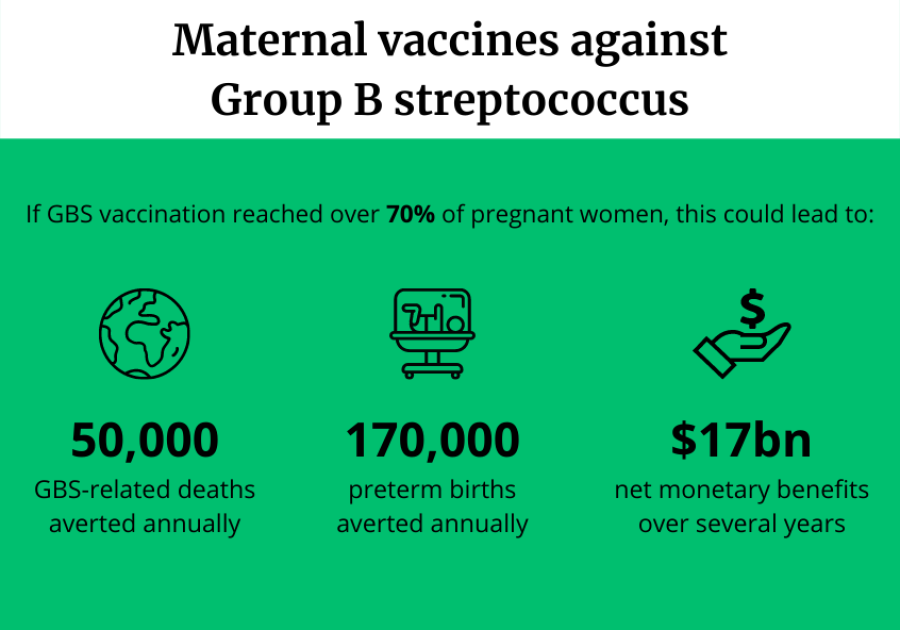 A new report from the World Health Organization (WHO) and the London School of Hygiene & Tropical Medicine (LSHTM) reveals the alarming global impact of Group B streptococcus (GBS) – a common bacterium that can be transmitted in the womb, during birth, or in the early weeks of life – leading to around 150,000 deaths of babies each year, more than half a million preterm births and significant long-term disability.

The report calls urgently for the development of maternal vaccines against GBS to reduce this toll, emphasising they could be highly cost-effective – with significant health benefits – in all regions of the world.

Dr Phillipp Lambach, Medical Officer from WHO’s Immunization, Vaccines and Biologicals department, and report author, said: “This new research shows that Group B strep is a major and underappreciated threat to newborn survival and wellbeing, bringing devastating impacts for so many families globally. WHO joins partners in calling for urgent development of a maternal GBS vaccine, which would have profound benefits in countries worldwide.”

For the first time, this new research quantifies the major contribution of GBS to preterm births, as well as neurological impairments – such as cerebral palsy, hearing and vision loss – that can occur following GBS-associated infections.

Several GBS vaccine candidates are in development but none are yet available, despite having been in the pipeline for several decades.

Professor Joy Lawn, Director of the Maternal Adolescent Reproductive & Child Health (MARCH) Centre at LSHTM, and a contributor to the report, said: “Group B strep infection poses a serious challenge to every family affected, and in every country. Maternal vaccination could save the lives of hundreds of thousands of babies in the years to come, yet 30 years since this was first proposed, the world has not delivered a vaccine. Now is the time to act to protect the world’s most vulnerable citizens with a GBS vaccine.”

An average of 15% of all pregnant women worldwide – nearly 20 million annually – carry the GBS bacterium in their vagina, usually without symptoms. It can then spread from a pregnant woman to her unborn baby in the womb, or to newborns during labour.

Currently antibiotic prophylaxis administered to a woman during labour is the main means of preventing GBS disease in newborn infants, if the bacterium is detected during pregnancy. However, even in regions with high prophylactic coverage, there remain significant health risks, since this intervention is unlikely to prevent most GBS associated stillbirths, preterm births, or GBS disease that occurs later after birth.

Importantly the largest burden of GBS is in low- and middle-income countries, where screening and intrapartum antibiotic administration are most challenging to implement, and a vaccine is therefore most urgently needed. The highest rates of maternal GBS are found in sub-Saharan Africa (accounting for around half of the global burden), and Eastern and South-Eastern Asia.

Dr Martina Lukong Baye, Coordinator of the National Multisector Programme to Combat Maternal, Newborn & Child Mortality at the Ministry of Public Health in Cameroon, also a contributor to the report, said: “A new maternal vaccine against GBS would be a game-changer in the reduction of newborn and maternal deaths for the most affected countries - especially sub-Saharan Africa where the burden of these deaths is alarming. We plead to all stakeholders to treat this as a matter of moral priority.”

Debbie Forwood, whose daughter Ada was stillborn after they both developed a GBS infection, said: “It is difficult to describe the breadth or depth of the grief when your child dies, or the accompanying guilt, and how it changes you, your family, and your relationships forever. Only a GBS vaccine could have saved Ada. When a vaccine can be widely rolled out, I will weep and scream with the unfairness that it came too late for her, and for all the other babies who are needlessly suffering and dying every year that it is delayed. But I will also  weep with joy that in the future, many more will live, and their families will be saved from the living hell that is the death of a child.”

The report calls for researchers, vaccine developers and funders to accelerate development of an effective GBS vaccine that could be administered to pregnant women during routine pregnancy check-ups.

Estimates suggest that if GBS vaccination reached over 70% of pregnant women, then over 50,000 GBS-related deaths could be averted annually - as well as over 170,000 preterm births. According to the report, the net monetary benefits from a year of maternal GBS vaccination could reach as high as $17 billion – accruing over several years - if vaccines are affordably priced.

The report highlights important data gaps which lead to some uncertainty around the total burden of deaths and disease caused by GBS. Infectious causes of stillbirths, for instance, are often under-investigated across countries, meaning the true contribution of GBS may be even higher still.

This report was launched at the global conference on GBS, the ISSAD conference being held by WHO and LSHTM from Wednesday 3 November to Friday 5 November 2021. This conference aims to mobilise researchers on how to close data gaps and accelerate science to reduce the impacts of this life-threatening bacterium worldwide.