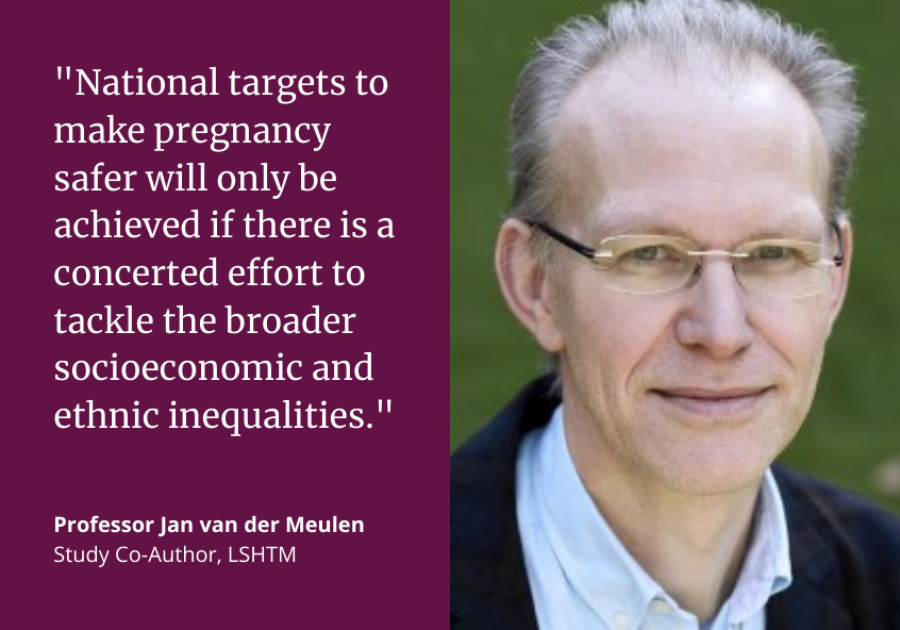 Large inequalities in pregnancy outcomes between ethnic and socioeconomic groups in England, according to a nationwide study of over one million births in the English National Health Service (NHS) between 2015 and 2017, published in The Lancet.

The study, co-authored by the London School of Hygiene & Tropical Medicine, suggests that current national programmes to make pregnancy safer, which focus on individual women’s risk and behaviour and their antenatal care, will not be enough to improve outcomes for babies born in England. In order to reduce disparities in birth outcomes at a national level, politicians, public health professionals and healthcare providers must work together to address racism and discrimination and to improve social circumstances, social support, and the health of women throughout their lives.

Dr Jennifer Jardine, first author from the Royal College of Obstetrics and Gynaecologists, said: “The stark reality is that across England, women’s socioeconomic and ethnic background are still strongly related to their likelihood of experiencing serious outcomes for their baby. I think that people will be shocked to see that these inequalities are still responsible for a substantial proportion of adverse pregnancy outcomes in England.

“Over the past few decades, efforts to close the gap in birth outcomes focusing primarily on improving maternity care and targeting individual behaviours have not been successful. Birth outcomes are not just the end product of pregnancy, but of the entire life of the mother. While we must continue to encourage healthy behaviours during pregnancy, we also need public health professionals and politicians to strengthen efforts to address the lifelong, cumulative impact of racism and social and economic inequalities on the health of women, families, and communities.”

The NHS has set as a target of halving rates of stillbirth and neonatal death and reducing levels of and preterm birth by 25% by 2025. Socioeconomic deprivation and minority ethnic background are known risk factors for adverse pregnancy outcomes. However, little is known about the strength of these risk factors or the scale of their impact at the population level.

Moreover, efforts to improve pregnancy outcomes and to lessen inequalities are hampered by a lack of information about how differences in pregnancy outcomes are related to women’s societal circumstances and pre-existing health, and which groups are most strongly affected.

A team from the National Maternity and Perinatal Audit analysed records of births between 1 April 2015 and 31 March 2017 in NHS hospitals in England to quantify socioeconomic and ethnic inequalities on stillbirth (the death of a fetus after 24 weeks of pregnancy), preterm birth (livebirth before 37 weeks), and fetal growth restriction (FGR) in England.

The researchers calculated the proportion of adverse pregnancy outcomes that would not have occurred if all women had the same pregnancy risk as the women in the least deprived 20% of neighbourhoods or as those from a white ethnic background. Socioeconomic status was measured for each local area using information on income, employment, education, housing, crime and the living environment.

They estimate 24% of stillbirths, 19% of live preterm births and 31% of livebirths with FGR would not have occurred if all women had the same risk of adverse pregnancy outcomes as women in the least deprived group. However, adjusting for ethnicity, maternal smoking and BMI substantially reduced these inequalities (12%, 12%, and 16% respectively) – suggesting that a considerable part of the socioeconomic inequalities in pregnancy outcomes can be explained by these maternal characteristics.

Pregnancy complications were found to disproportionately affect Black and minority ethnic women – with 12% of stillbirths, 1% of preterm births and 17% of births with FGR attributed to ethnic inequality. Importantly, adjusting for socioeconomic deprivation, maternal smoking and BMI had little impact on these outcomes, indicating that other factors related to discrimination based on ethnicity and culture may contribute to poor pregnancy outcomes.

However, the largest increases in excess risk of stillbirth and FGR occurred in the most socioeconomically disadvantaged South Asian and Black women. More than half of stillbirths and three quarters of births with FGR among the most deprived South Asian women were attributable to socioeconomic and ethnic inequalities, and could therefore be avoidable.

Professor Jan van der Meulen from LSHTM and study co-lead author, said: “There are many possible reasons for these disparities. Women from deprived neighbourhoods and Black and minority ethnic groups may be at a disadvantage because of their environment, for example, because of pollution, poor housing, social isolation, poor access to maternity and health care, insecure employment and poor working conditions, and more stressful life events. National targets to make pregnancy safer will only be realistically achieved if there is a concerted effort not only by midwives and obstetricians but also by public health professionals and politicians to tackle the broader socioeconomic and ethnic inequalities.”

They also recommend public health strategies to reduce inequalities in women’s health before pregnancy, focusing on smoking and dietary habits as well as wider aspects of maternal adversity, such as mental health issues, substance abuse, and stress related to social disadvantage.

Lastly, they call for wider policies to address the key causes of inequality, such as income, education, and employment, that indirectly influence pregnancy outcomes.

Dr Edward Morris, President of the Royal College of Obstetricians and Gynaecologists, said: “The findings of this study are alarming but sadly they come as no surprise. They provide more evidence that poverty, racism and discrimination can affect women throughout their lives and ultimately lead to devastating incidences of pregnancy complications and baby loss.

“We hope the UK government and NHS will provide further investment to roll out this evidence based technology to all pregnant women in the UK to help reduce these stark inequalities.”

The researchers acknowledge limitations of the study, including that these findings might not represent the range of individuals’ socioeconomic status within a particular area, and the assumption that the effects of socioeconomic deprivation and ethnicity are not modified by other circumstances, such as overall health, lifestyle, and nutrition.