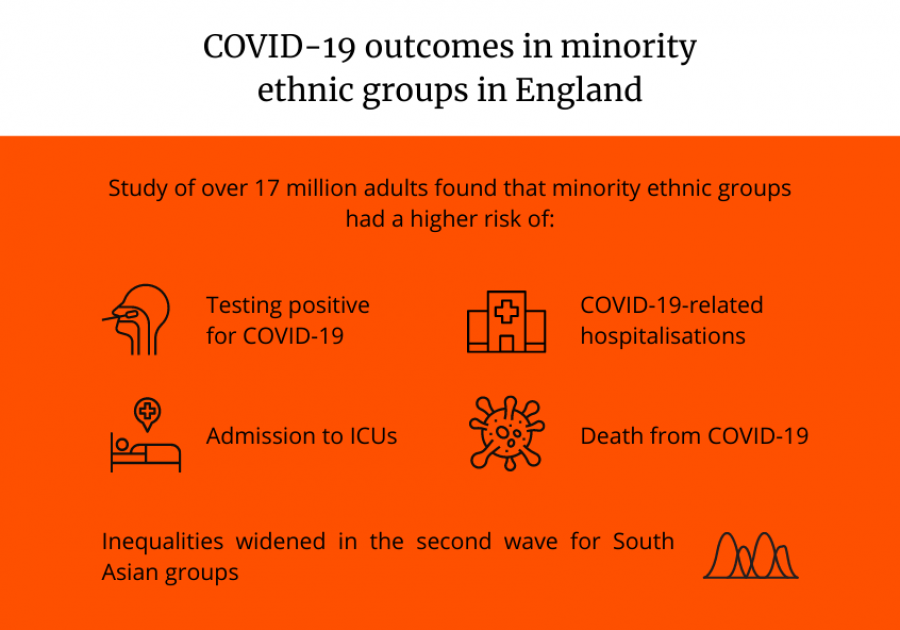 Minority ethnic groups had higher risk of testing positive for SARS-CoV-2 and of COVID-19-related hospitalisations, intensive care (ICU) admissions and death compared with white groups in England, according to a new observational study published in The Lancet.

The COVID-19 pandemic is understood to have had a disproportionate impact on minority ethnic communities in the UK and beyond. Led by the London School of Hygiene & Tropical Medicine (LSHTM), this study accounted for a large number of explanatory variables such as household size, social factors and health conditions across all ethnic groups and at different stages of COVID-19, from testing to mortality.

Understanding drivers of SARS-CoV-2 infection and COVID-19 in minority ethnic communities will be crucial to public policy efforts to overcome inequalities.

Dr Rohini Mathur, from LSHTM and study lead author, said: “Minority ethnic groups in the UK are disproportionately affected by factors that also increase the risk for poor COVID-19 outcomes, such as living in deprived areas, working in front-line jobs, and having poorer access to healthcare. Our study indicates that even after accounting for many of these factors, the risk for testing positive, hospitalisation, ICU admission and death was still higher in minority ethnic groups compared with white people in England.

“To improve COVID-19 outcomes, we urgently need to tackle the wider disadvantage and structural racism faced by these communities, as well as improving access to care and reducing transmission.”

On behalf of NHS England, the research team used the new secure OpenSAFELY data analytics platform to analyse partially anonymised electronic health data collected by GPs covering 40% of England. These GP records were linked to other national coronavirus-related data sets for the first and second waves of the pandemic – including testing, hospital data and mortality records. Ethnicity was self-reported by participants in GP records and grouped into five census categories (white, South Asian, Black, other, mixed) and then a further 16 sub-groups.

Possible explanatory factors, including clinical characteristics, such as BMI, blood pressure, smoking status and conditions such as asthma and diabetes were included in the analyses alongside demographic information such as age, sex, deprivation and household size.

During wave 1, nearly all minority ethnic groups had higher relative risk for testing positive, hospitalisation, ICU admission, and death compared to white groups. The largest disparities were seen in ICU admissions, which were more than doubled for all minority ethnic groups compared with white groups, with Black people more than three times more likely to be admitted to ICU after accounting for other factors.

Dr Mathur said: “Higher risks for testing positive and subsequent poor outcomes amongst minority ethnic groups suggest that people may delay seeking testing or accessing care for SARS-CoV-2. This may be due to lack of access to testing sites or conflicting health messaging. It may also suggest that some may be fearful of losing income or employment if required to quarantine after testing positive, as minority ethnic groups are more likely to work in insecure jobs with poorer workplace protections. People who need to be tested as well as those who test positive must be supported better if we are to reduce disparities in COVID-19 outcomes.”

Compared with wave 1, the relative risk for testing positive, hospitalisation, ICU admission, and death were smaller in pandemic wave 2 for all minority ethnic communities compared to white people, with the exception of South Asian groups. South Asian groups remained at higher risk for testing positive, with relative risks for hospitalisation, ICU admission, and death greater in magnitude in wave 2 compared to wave 1.

Dr Mathur said: “Despite the improvements seen in most minority ethnic groups in the second wave compared to the first, it’s concerning to see that the disparity widened among South Asian groups. This highlights an urgent need to find effective prevention measures that fit with the needs of the UK’s ethnically diverse population.”

After accounting for age and sex, social deprivation was the biggest potential explanatory factor for disparities in all minority ethnic groups except South Asian. In South Asian groups, health factors (e.g., BMI, blood pressure, underlying health conditions) played the biggest role in explaining excess risks for all outcomes. Household size was an important explanatory factor for the disparity for COVID-19 mortality in South Asian groups only.

Dr Mathur said: “While multigenerational living may increase risk of exposure and transmission (from children or working age adults to older or vulnerable family members), such households and extended communities also offer valuable informal care networks and facilitate engagement with health and community services. In light of emerging evidence that minority ethnic groups are less likely to take up the COVID-19 vaccine, co-designing culturally competent and non-stigmatising engagement strategies with these communities is increasingly important.”

The authors caution that there are some limitations to the study including an inability to capture all potential explanatory variables, including occupation, health-related behaviours, and experiences of racism or structural discrimination. They call for improving the completeness of ethnicity recording in health data to further support the conduct of high quality research into addressing health inequalities for COVID-19 and beyond.