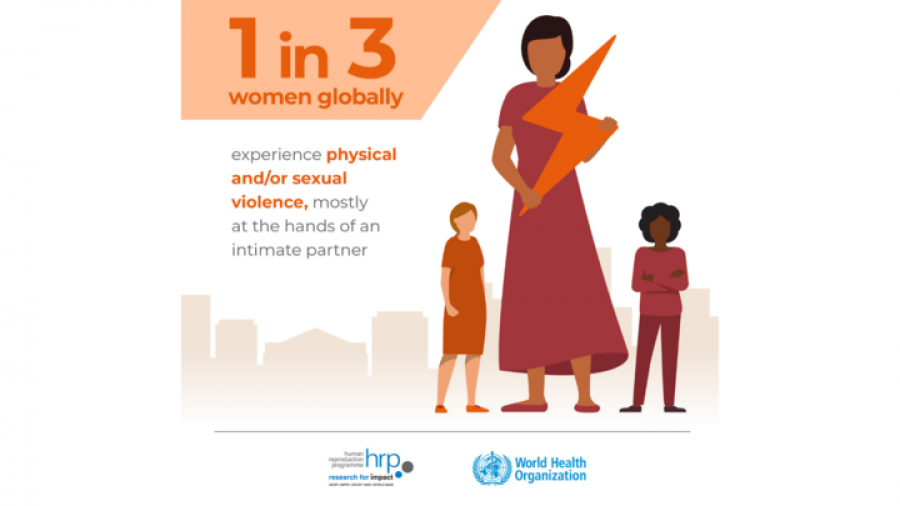 Violence against women remains devastatingly pervasive and starts alarmingly young, according to a new report led by the World Health Organization.

The report was developed with support from Professor Heidi Stöckl of the London School of Hygiene & Tropical Medicine and Professor Mathieu Maheu-Giroux of McGill University, Canada.

It found that across their lifetime, 1 in 3 women, around 736 million, are subjected to physical or sexual violence by an intimate partner or sexual violence from a non-partner – a number that has remained largely unchanged over the past decade.

This violence starts early: 1 in 4 young women (aged 15-24 years) who have been in a relationship will have already experienced violence by an intimate partner by the time they reach their mid-twenties.

Dr Tedros Adhanom Ghebreyesus, WHO Director-General, said: “Violence against women is endemic in every country and culture, causing harm to millions of women and their families, and has been exacerbated by the COVID-19 pandemic. But unlike COVID-19, violence against women cannot be stopped with a vaccine. We can only fight it with deep-rooted and sustained efforts – by governments, communities and individuals – to change harmful attitudes, improve access to opportunities and services for women and girls, and foster healthy and mutually respectful relationships.”

Intimate partner violence is by far the most prevalent form of violence against women globally (affecting around 641 million).  However, 6% of women globally report being sexually assaulted by someone other than their husband or partner. Given the high levels of stigma and under-reporting of sexual abuse, the true figure is likely to be significantly higher.

This report presents data from the largest ever study of the prevalence of violence against women, conducted by WHO on behalf of a special working group of the United Nations. Based on data from 2000 to 2018, it updates previous estimates released in 2013.

Professor Heidi Stöckl from the London School of Hygiene & Tropical Medicine LSHTM who helped develop the Global Database used in the report, said:

“The prevalence of violence against women and girls barely changed compared to the 2013 estimates, despite robust evidence that violence is preventable. Governments therefore immediately need to invest in effective, multi-sectoral interventions to address intimate partner violence to meet the SDG targets on reducing violence against women.

“This is especially urgent since there is increasing evidence of the short and long-term impact of COVID-19 and its restrictions on an increase in women’s reports of intimate partner violence.”

While the numbers reveal already alarmingly high rates of violence against women and girls, they do not reflect the ongoing impact of the COVID-19 pandemic.

WHO and partners warn that the COVID-19 pandemic has further increased women’s exposure to violence, as a result of measures such as lockdowns and disruptions to vital support services.

“It’s deeply disturbing that this pervasive violence by men against women not only persists unchanged, but is at its worst for young women aged 15-24 who may also be young mothers.  And that was the situation before the pandemic stay-at home orders. We know that the multiple impacts of COVID-19 have triggered a “shadow pandemic” of increased reported violence of all kinds against women and girls,” said UN Women Executive Director Phumzile Mlambo-Ngcuka. “Every government should be taking strong, proactive steps to address this, and involving women in doing so”, she added.

Though many countries have seen increased reporting of intimate partner violence to helplines, police, health workers, teachers, and other service providers during lockdowns, the full impact of the pandemic on prevalence will only be established as surveys are resumed, the report notes.

Inequities are a leading risk factor for violence against women

Violence disproportionately affects women living in low- and lower-middle-income countries.  An estimated 37% of women living in the poorest countries have experienced physical and/or sexual intimate partner violence in their life, with some of these countries having a prevalence as high as 1 in 2.

Younger women are at highest risk for recent violence. Among those who have been in a relationship, the highest rates (16%) of intimate partner violence in the past 12 months occurred among young women aged between 15 and 24.

Violence against women must be prevented

Violence – in all its forms – can have an impact on a woman’s health and well-being throughout the rest of her life – even long after the violence may have ended. It is associated with increased risk of injuries, depression, anxiety disorders, unplanned pregnancies, sexually-transmitted infections including HIV and many other health problems. It has impacts on society as a whole and comes with tremendous costs, impacting national budgets and overall development.

“To address violence against women, there’s an urgent need to reduce stigma around this issue, train health professionals to interview survivors with compassion, and dismantle the foundations of gender inequality,” said Dr Claudia Garcia-Moreno of WHO. “Interventions with adolescents and young people to foster gender equality and gender-equitable attitudes are also vital.”

Countries should honour their commitments to increased and strong political will and leadership to tackle violence against women in all its forms, through:

Global, regional and national estimates for intimate partner violence against women and global and regional estimates for non-partner sexual violence against women was developed by WHO and the UNDP-UNFPA-UNICEF-WHO-World Bank Special Programme of Research, Development and Research Training in Human Reproduction (HRP) for the United Nations Inter-Agency Working Group on Violence Against Women Estimation and Data.