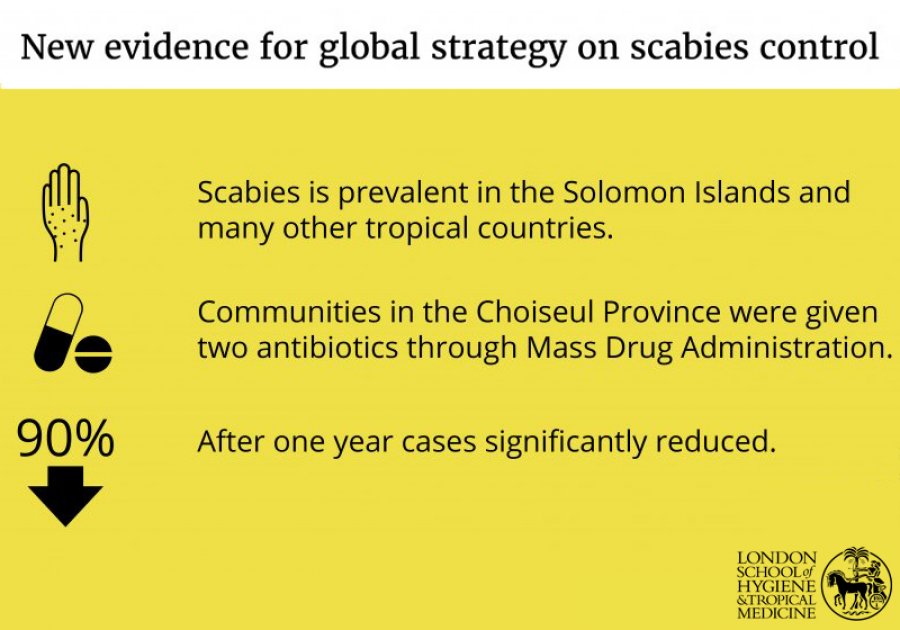 Mass Drug Administration (MDA) of two antibiotics can be highly effective at reducing cases of scabies and the bacterial infection impetigo, according to new research published in The Lancet Infectious Diseases.

The study was conducted by the London School of Hygiene & Tropical Medicine (LSHTM), Murdoch Children’s Research Institute (MCRI), the Kirby Institute at UNSW Sydney and the Solomon Islands Ministry of Health and Medical Services.

It saw the entire population of Choiseul Province of the Solomon Islands (26,000 people), in the Pacific, given one round of the antibiotics ivermectin and azithromycin together. The prevalence of scabies and impetigo in residents of 10 randomly selected villages before and after Mass Drug Administration (MDA) by the Solomon Islands Ministry of Health and Medical Services was then compared.

The study is the largest evaluation of ivermectin-based mass drug administration for the control of scabies, and supports large-scale implementation of this strategy for control of scabies in locations where the condition is identified as a public health priority.

Dr Michael Marks from LSHTM and co-author of the study, said: “We know that treating individual cases of scabies is not effective, however treatment of entire communities has been shown in small community-based trials to substantially reduce cases. Our study demonstrates this can be an effective approach when delivered at a larger scale.”

Scabies is a parasitic skin disease that affects an estimated 200 million people worldwide. The disease causes skin inflammation with itch that is frequently severe, and often associated with bacterial skin infection caused by Staphylococcus aureus and Streptococcus pyogenes (impetigo).  This can in turn lead to severe complications including septicaemia and post-streptococcal glomerulonephritis. In 2017, growing awareness of the burden of disease due to scabies led the World Health Organization to recognise it as a neglected tropical disease.

Dr Lucia Romani from the Kirby Institute and lead author on the paper, said: “Scabies is too common in many tropical developing countries, especially in rural and remote communities where people share small living and sleeping spaces access to treatment is limited.”

This new study was conducted in Choiseul Province of the Solomon Islands where a very high number of scabies cases have been reported. 1,399 people had their skin examined at the start of the MDA in 2015, with 261 (one in five) having scabies and 347 having impetigo. Twelve months on, 1,261 people were examined with only 29 people with scabies and 81 with impetigo. Additionally, there was also almost 6,000 less people presenting to outpatient clinics, a drop of 36.1% cent, in the three-months after MDA. Presentations for skin sores, boils and abscesses also fell by 50.9%.

Oliver Sokana, from the Solomon Islands Ministry of Health, said: “Both diseases were most common in children aged between five and nine years old.”

The safety and feasibility of large-scale mass co-administration of ivermectin and azithromycin in Choiseul Province was reported in a recent study.

Dr Marks said: “Scabies is extremely common, and is a major risk factor for dangerous bacterial skin infection. Our study provides crucial evidence for the global strategy of scabies control being developed.”

The authors acknowledge limitations of their study including that is was non-randomised so they are unable to say with certainty that factors other than the intervention did not influence the outcome. Further research is needed to assess durability and scalability of mass drug administration in larger, non-island populations, and to assess its effect on the severe bacterial complications of scabies.

The study was funded by the International Trachoma Initiative; the Murdoch Children’s Research Institute, Australia; the Scobie and Claire Mackinnon Trust, Australia; and the Wellcome Trust.