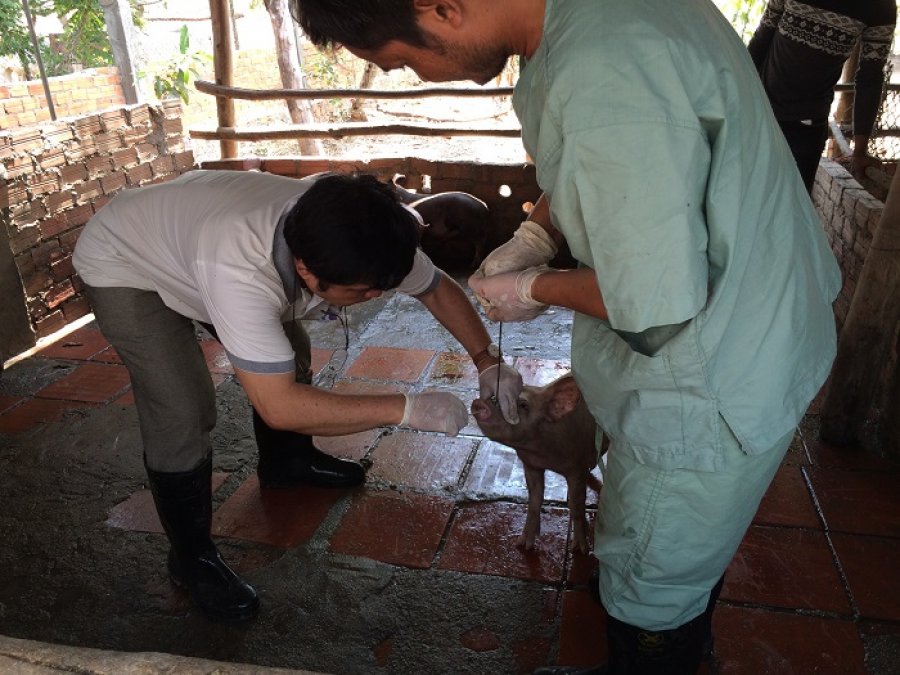 The London School of Hygiene & Tropical Medicine (LSHTM) has been awarded more than £2m to conduct research into disease transmission between pigs and humans. Funded by the Defence Threat Reduction Agency, the work will focus on risk of zoonotic influenza from swine production and trading systems in Cambodia, and be led by Dr James Rudge.

In 2009, a pandemic influenza virus (H1N1-pdm09) emerged which originated from swine. The Centre for Disease Control and Prevention estimates that 151,700 to 575,400 people worldwide died from the virus in the first year that it circulated.

It is highly likely that pigs will play a role in the next influenza pandemic however, little is known about the burden of disease among pigs, and how they contribute to the spread of flu.

There is a particular need for this type of research and surveillance in Cambodia - a country which still relies largely on rural smallholder systems with very limited biosecurity and disease surveillance. Pig production is also rapidly increasing and intensifying in-country, which could have a profound impact on zoonotic and pandemic risk. Furthermore, highly pathogenic avian influenza has been identified in Cambodia, and cross-species transmission to pigs is of concern.

The findings of this research could help in identifying ‘hotspots’ for zoonotic and pandemic risk in relation to pig production systems, which will inform where surveillance and control measures should be targeted.

To identify where risks of zoonotic transmission and the emergence of new strains of influenza viruses are highest, and how livestock practices may contribute to these risks, researchers will collect information on pig movements and husbandry practices across smallholders, commercial farms, and slaughterhouses in south central Cambodia.

By taking samples from pigs and humans, the team will be able to identify different virus strains in circulation and investigate their evolution and spread. These data can then be used to estimate rates of viral transmission among pigs and between pigs and humans.

The team will also develop mathematical models to simulate flu transmission and explore the impact of different strategies for improving disease surveillance and control.

Dr James Rudge, Assistant Professor of Infectious Disease Epidemiology at LSHTM and research lead, said: “I am delighted that we have received this funding from the Defence Threat Reduction Agency, which will allow us to carry out much-needed research into influenza risk and transmission among pigs and humans.

“Understanding more about the types of influenza circulating among pigs, and how these might be spread from animals to humans, is hugely important. Livestock systems, particularly in Southeast Asia, are changing rapidly and we do not yet understand how this will affect the emergence and spread of new viruses.

“We hope our research will ultimately help reduce the risk of pandemics emerging in the region and increase the early detection of new flu viruses.”

Additionally, the findings will help inform the Cambodian livestock authorities where they should target interventions to reduce the risk of influenza among pigs, and how to modify the swine sector if there is a flu outbreak among pigs.

Along with educating pig farmers about how to avoid becoming ill or being infected with influenza from pigs, an important outcome will be helping to build capacity for research and surveillance in-country.

The team also hopes that the project will contribute towards efforts against pig-associated diseases beyond influenza. A current priority is African Swine Fever (ASF). Although the ASF virus is not a zoonosis, it is highly fatal in pigs, and is rapidly spreading in pig populations across Asia.

Dr Rudge added: “The huge livestock and economic losses we’re seeing from ASF, which has recently spread to Cambodia, is yet another wake-up call showing how vulnerable our food systems can be to outbreaks."

Partners on the project include Duke-NUS Medical School (Singapore), University of Health Sciences, the National Animal Health and Production Research Institute and the Livestock Development for Community Livelihood (Cambodia).

Where humans and animals collide: Emerging infections and newfound resistance
Centre for the Mathematical Modelling of Infectious Diseases
Learn More