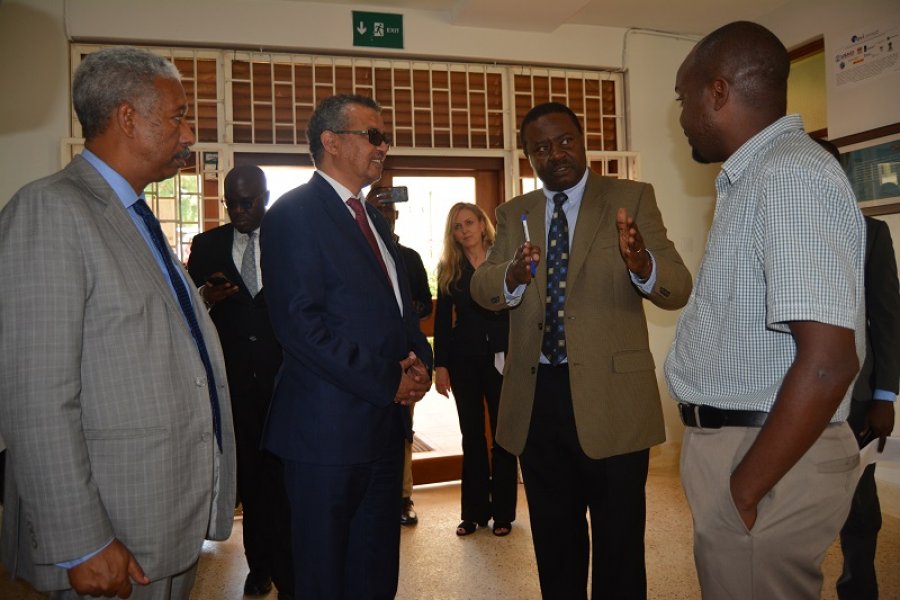 The Director-General of the World Health Organization, Dr Tedros Adhanom Ghebreyesus, has paid tribute to the work of the Uganda Virus Research Institute (UVRI) and its partners, including the MRC/UVRI and LSHTM Uganda Research Unit, for their contribution to the country’s Ebola surveillance and preparedness efforts.

Dr Tedros’ visit came in the wake of confirmed Ebola cases in Uganda. The Uganda Virus Research Institute leads the testing and detection of Viral Haemorrhagic Fever (VHF) cases in the country, including Ebola.

During his visit to the Entebbe-based Institute Dr Tedros, an LSHTM alumnus, was given a tour of the laboratories, including the VHF lab, where testing for Ebola currently takes place and the MRC/UVRI and LSHTM virology and immunology laboratories

He was escorted by Professor Pontiano Kaleebu, Director of MRC/UVRI and LSHTM Uganda Research Unit, and the Uganda Virus Research Institute. Professor Kaleebu said: "The Uganda Virus Research Institute and her partners including the MRC/UVRI and LSHTM Uganda Research Unit appreciate the support of the Ministry of Health and other stakeholders such as the WHO that has greatly improved Ebola preparedness and surveillance, and quickened response in Uganda.”

The MRC/UVRI Uganda Research Unit formally joined LSHTM on 1 February 2018, along with the MRC Unit The Gambia. The Uganda Unit conducts research to add knowledge to and improve the control of infectious and non-communicable diseases in Uganda, Africa and across the world. Alongside this, an important role of the unit is translating research findings into policy and practice and capacity building for research across Africa.

As part of his visit to Uganda, Dr Tedros also met the President of the Republic of Uganda, HE Yoweri Museveni, to discuss Uganda’s current Ebola situation and other health issues. It was agreed that bipartisan political alignment and preparedness is key to ending the current Ebola outbreak, in partnership with the Democratic Republic of the Congo.