Declines in sexual frequency seen among over 25s and married couples 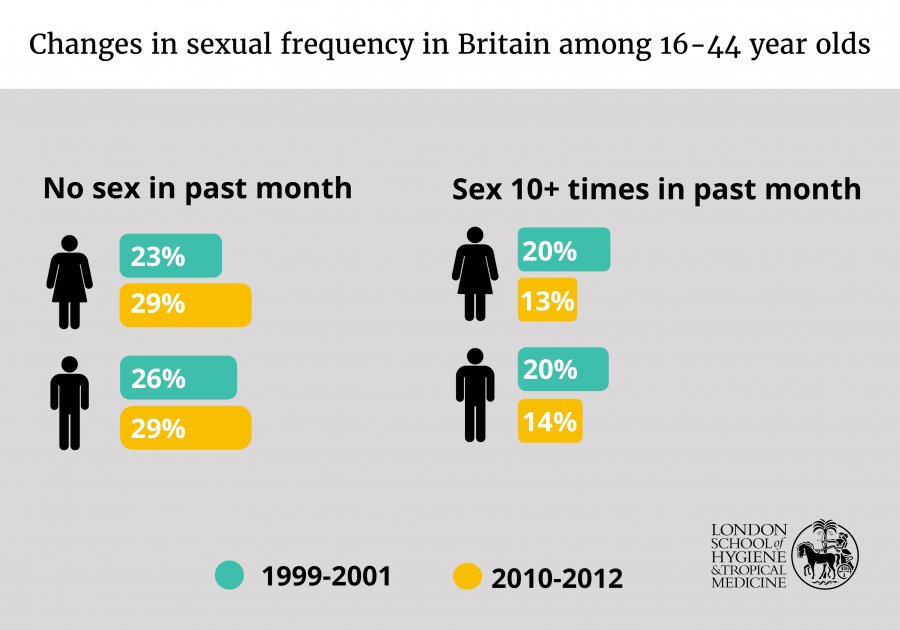 Fewer than half of men and women in Britain aged 16-44 have sex at least once a week, according to new research published in the BMJ.

Using data from the British National Survey of Sexual Attitudes and Lifestyles (Natsal), researchers found a general decline in sexual frequency in Britain between 2001 and 2012, with the biggest falls seen among over 25s and married or cohabiting couples.

Evidence shows that regular sexual activity is beneficial to health and wellbeing, but a recent decline in frequency has been seen in several high-income countries. Little is known about these trends in Britain and the lifestyle factors associated with them.

Led by the London School of Hygiene & Tropical Medicine (LSHTM), researchers analysed data from over 34,000 men and women aged 16 to 44 years from three successive waves of Natsal (completed in 1991, 2001 and 2012). They measured changes in actual and preferred frequency of sex and examined factors associated with sexual activity.

Declines in levels of sexual frequency were evident across all age groups for women, and for all but the 16-24 year old age group for men, but were largest among those aged 25 and over and those who were married or living together.

Kaye Wellings, lead author and Professor of Sexual and Reproductive health at LSHTM, said: “Several factors are likely to explain the declines, but one may be the sheer pace of modern life. It is interesting that those most affected are in mid-life, the group often referred to as the ‘u-bend’ or ‘sandwich’ generation. These are the cohorts of men and women who, having started their families at older ages than previous generations, are often juggling childcare, work and responsibilities to parents who are getting older.”

Similarly, among men and women who were married or living together, reported sexual frequency in the last month was higher, while the odds of reporting sex 10 or more times in the past month were roughly halved.

People in better physical and mental health and those who were fully employed with higher incomes reported having sex more often.

Professor Wellings said: “What is important to well-being is not how often people have sex but whether it matters to them. More than half of the men and women taking part in the study said they would prefer to have sex more often, which could partly stem from unfavourable comparisons with what they think is the norm.

“Most people believe that others have more regular sex than they do themselves. The merits of Natsal in informing policy and practice are well established, but a less well-recognised function of the surveys is to dispel myths surrounding sexual behaviour. Many people are likely to find it reassuring that they are not out of line.”

This authors acknowledge the limitations of their study, including its observational nature which means it cannot to determine cause.

Natsal is one of the largest and most comprehensive studies of sexual behaviour and lifestyles in the world, and is a major source of data informing sexual and reproductive health policy in Britain. It is conducted by LSHTM, University College London and NatCen Social Research, and the studies have been carried out roughly every 10 years since 1990. To date they have involved interviews with more than 45,000.

Natsal is funded by the Medical Research Council and the Wellcome Trust, with additional funding from the UK Research and Innovationand Department of Health and Social Care.

Funding boost to help improve sexual health in Britain
The National Survey of Sexual Attitudes and Lifestyles
Sex in the UK: how culture and society can define your sexual health
Sexual satisfaction among older people about more than just health
Learn More