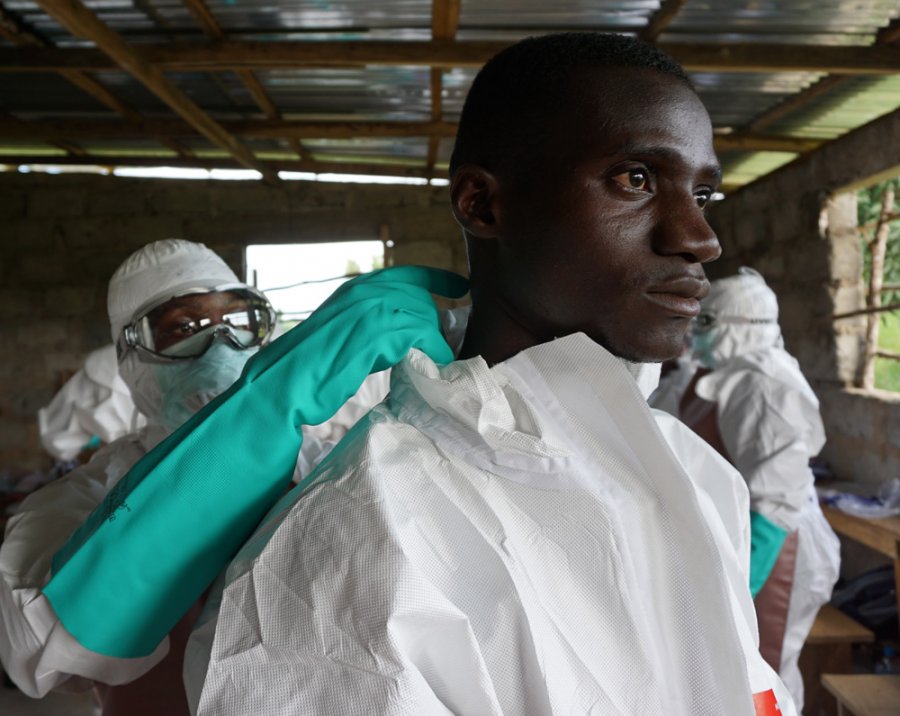 Undiagnosed Ebola virus infection was probably very rare in international workers who were deployed during the 2013-2015 outbreak of the virus in West Africa, despite mild and asymptomatic cases of Ebola being known to occur, according to new research published in the journal PLOS Medicine.

As part of the study, more than 250 UK and Ireland healthcare and other workers were tested for Ebola virus antibodies after returning from West Africa - no evidence of missed infections was found. This suggests that the vast majority of volunteers were kept safe by Personal Protective Equipment (PPE) and the Ebola treatment centre procedures in place. However, the study also found that potentially avoidable events putting frontline workers at risk of infection were quite common during the outbreak, with one in six participants classified as having ‘near miss’ exposure events.

In what is believed to be the first study of the prevalence of Ebola infection in international responders, the research team, led by the London School of Hygiene & Tropical Medicine and funded by the Wellcome Trust, enrolled 300 UK and Ireland healthcare and other frontline workers for the study and sent them oral fluid collection devices.

Among the 268 respondents who returned their samples, 99% showed negative results on an antibody test which the authors had already proved gave very accurate results in Sierra Leone. The remaining two people, who had no known exposure or symptoms, had positive results, but follow-up testing using different methods was negative, making Ebola virus infection very unlikely.

Lead author Dr Catherine Houlihan from the London School of Hygiene & Tropical Medicine and UCL said: “The 2013-2015 Ebola outbreak was unprecedented - the commitment and bravery of those who volunteered saved many lives. We know a small number of international health workers were infected with the virus but we thought it was possible that some infections had been missed, as we know asymptomatic or unrecognised infections can occur. However, our research suggests undetected infection in this group is, at most, a very rare event, and that the Personal Protective Equipment did its job well.”

Participants, who included clinicians, laboratory workers and epidemiologists, also completed an online survey which asked if they experienced possible exposure to Ebola virus while in West Africa. Using 268 respondents’ descriptions, 16% (43 people) were identified as having ‘near miss’ exposure events.

27 respondents reported experiencing very low-risk incidents such as having a facemask dislodged. Ten were identified as having low-risk exposure events which were classified as having direct physical contact with an Ebola patient who does not have vomiting, diarrhoea, or bleeding. Five faced an intermediate risk incident with one respondent reporting ‘being vomited on while wearing just gloves’ and not full PPE, and one experienced the high-risk incident of a ‘sharp injury with a broken vial of medication inside the ‘red zone’ with dirty and contaminated gloves’. The antibody tests showed that none of these individuals had any evidence of infection with Ebola.

Participants reported PPE suits torn by catching on doorways or corners, PPE breaches in Ebola laboratories, such as torn outer gloves, as well as the additional anxiety and distress these incidents caused them.

Dr Catherine Houlihan said: “The scale of the outbreak meant frontline workers faced demanding and draining circumstances. Participants have given crucial insights which provide valuable lessons for future Ebola outbreaks. Regular debriefing after work in the clinical red zone or laboratory, and blame-free reporting of near misses, should be part of routine practice in emergency treatment response work. Simple changes such as banning glass vials in the red zone could reduce the number of staff experiencing skin lacerations, and further testing of the robustness and fit of PPE suits, could potentially save health workers’ lives in the future.”

Participants, who were based mostly in Sierra Leone, were also asked whether they experienced fever or diarrhoea while in West Africa or within one month of their return, and if so whether they were tested for Ebola virus at the time. Despite symptoms in 21% (57/268) of the respondents, 70% were not tested, with those still in West Africa much less likely to receive a test  - 11 out of 17 who fell ill on their return were tested, but just one person out of 21 who fell ill in West Africa was tested.

Dr Houlihan said: “This study provides reassuring evidence about the lack of Ebola infection in individuals who had not previously been tested for the virus. However, the high proportion of health workers who didn’t get tested when falling ill in West Africa, coupled with returnees’ potential exposure to Ebola, are a concern. Although we don’t know how many health workers reported being ill and were assessed to decide if they needed to be tested, protocols for the management of possible exposure to the virus, and for the management of illness, may need reviewing and to be standardised across organisations that deploy staff to outbreaks.

“Importantly, these protocols must be applicable to national as well as international staff. West African responders worked in large numbers from the early stages of the epidemic right through to its conclusion, and were undoubtedly at the highest risk. We must also ensure that every individual who works in these high-risk settings receives strong support and is thoroughly trained ahead of starting work, including on the use of PPE, how to reduce risk in and out of the red zone, and what to do if they think they have been exposed or if they become unwell.”

The authors acknowledge limitations of the study including that not all returning responders were included and participants were not a random sample. It is therefore possible that those who knew of possible exposures, or who had had symptoms, were particularly keen to participate. Since these were the people who were most likely to have been infected, the absence of undiagnosed infections is reassuring.