6 February 2018 London School of Hygiene & Tropical Medicine London School of Hygiene & Tropical Medicine https://lshtm.ac.uk/themes/custom/lshtm/images/lshtm-logo-black.png
An older malaria drug and a common laboratory dye with known antimalarial properties can safely and effectively be added to treatment regimens to block transmission of the most common form of malaria in Africa, according to a new study published in Lancet Infectious Diseases. 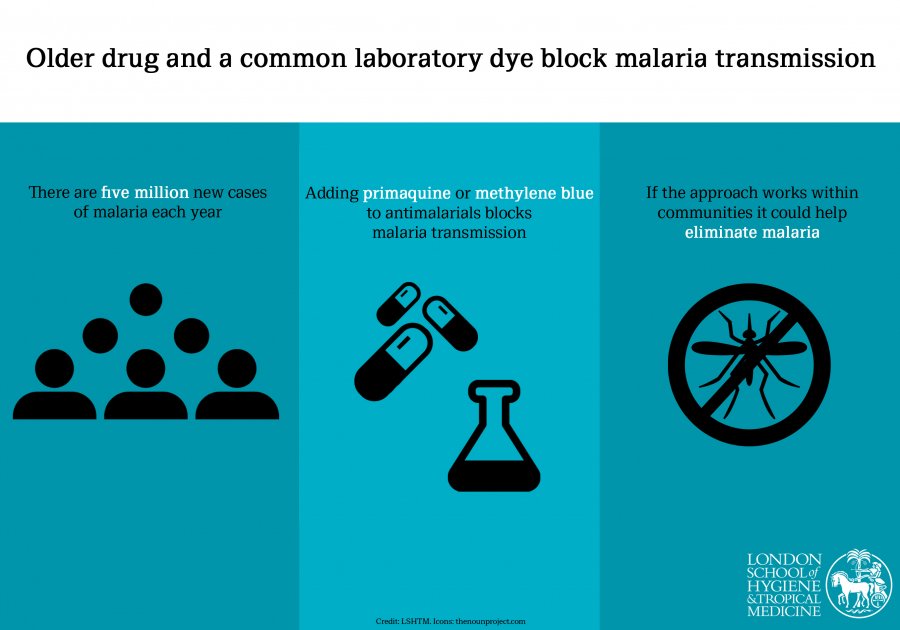 The authors say this development could help reduce the spread of P. falciparum malaria, including its drug-resistant forms, thus speeding progress toward elimination of the disease, but highlight that the approach needs to be tested within communities.

The international research team are from the London School of Hygiene & Tropical Medicine (LSHTM), the Malaria Elimination Initiative (MEI) at the University of California, San Francisco (UCSF) Global Health Group and the Malaria Research and Training Center (MRTC) in Mali, and Radboud Institute for Health Sciences in The Netherlands.

Professor Chris Drakeley from LSHTM said: “Despite the growing threat of drug resistance in some parts of the world, antimalarials are still very effective and save the lives of millions of people around the globe who contract the disease. However, current drugs have limited effect on preventing people with malaria transmitting the infection to other mosquitoes. Identifying drugs which block transmission could significantly reduce the five million new cases of malaria each year.”

Malaria has several different forms and is perpetuated through a cycle in which it is passed from mosquitoes to humans and back again. When a person is bitten by an infected mosquito, malaria parasites travel through the liver to the bloodstream, where they circulate for several weeks. The majority of parasites replicate into asexual forms in red blood cells, which cause the symptoms of malaria when they burst. But a small percentage develop into male and female cells, called gametocytes, which play an important role in transmitting the disease back to mosquitoes.

Since these gametocytes are not killed by the antimalarial drugs used to treat P. falciparum, people can continue to transmit the infection to mosquitoes for weeks after they’ve been treated, unless something is added to the treatment regimen to block their transmission.

The study, funded by the Bill & Melinda Gates Foundation and the European Research Council, tested the safety and efficacy of primaquine, which has been used for decades years to treat a form of malaria called P. vivax, and a dye called methylene blue, which has been in use for nearly a century to distinguish dead from living cells. Researchers found that both compounds blocked the P. falciparum parasite’s gametocytes from passing from infected humans into the mosquitoes that bit them.

The researchers conducted a Phase 2 trial to compare the effectiveness of the two compounds in preventing gametocyte transmission against treatment as usual in 80 boys and men in Mali with asymptomatic malaria. They found that adding a single 0.25mg/kg dose of primaquine to sulfadoxine-pyrimethamine and amodiaquine, or adding 15 mg/kg of methylene blue each day for three days to dihydroartemisinin-piperaquine, resulted in the near complete blockage of transmission within 48 hours of treatment.

Alassane Dicko, Professor of Public Health at the University of Science, Techniques and Technologies of Bamako in Mali, said: “Patients who were not given these medications were able to infect other mosquitoes for at least one week after treatment.”

Roly Gosling, Professor of Epidemiology and Biostatistics at UCSF, said: “Although these two drugs have been around for more than half a century, this is the first time that the exciting and impressive effects of the drugs on malaria transmission have been so clearly demonstrated in a comparative study. Now we can say that the effectiveness of common malaria drugs used for seasonal malaria chemoprevention can be improved, with the potential of removing the threat of malaria to many millions of people across West Africa.”

Teun Bousema, Associate Professor at Radboud Institute for Health Sciences in The Netherlands, said: “The results are very promising. We found that adding these drugs to antimalarial medicines already in use ensured that patients were no longer able to pass the disease on to mosquitoes.”

Researchers said the findings could help countries moving towards malaria elimination rapidly reduce population-level transmission of the disease, but formal trials are needed to confirm the optimal scenarios in which these drugs can be used, and how their use could be integrated with other malaria strategies and tools.

Professor Drakeley said: “These encouraging results show the potential effectiveness of methylene blue in stopping malaria transmission in its tracks, as well as strengthening the evidence on the optimal use of primaquine. The data add to the body of work suggesting that safe doses of drugs can be added to conventional treatment and that they block transmission at the individual level. The next step is evaluating this approach within communities to see if it can be an additional weapon in the armoury to reduce and eliminate malaria.”

These important findings form part of LSHTM’s leading work in investigating how to halt the spread of malaria. Thanks to the Bill & Melinda Gates Foundation, LSHTM and key collaborators including MRC Unit The Gambia at LSHTM, International Centre of Insect Physiology and Ecology Mbita, Kenya and the Infectious Diseases Research Collaboration in Uganda, have led the evaluation of the effectiveness of primaquine for reducing transmission of falciparum malaria. These findings have supported the World Health Organization guidelines on the drug’s implementation.