5 April 2017 London School of Hygiene & Tropical Medicine London School of Hygiene & Tropical Medicine https://lshtm.ac.uk/themes/custom/lshtm/images/lshtm-logo-black.png
Moderate changes to typical Indian diets could help to ‘future proof’ the Indian food system against the predicted decline in availability of groundwater over the coming decades, benefiting both health and the environment. 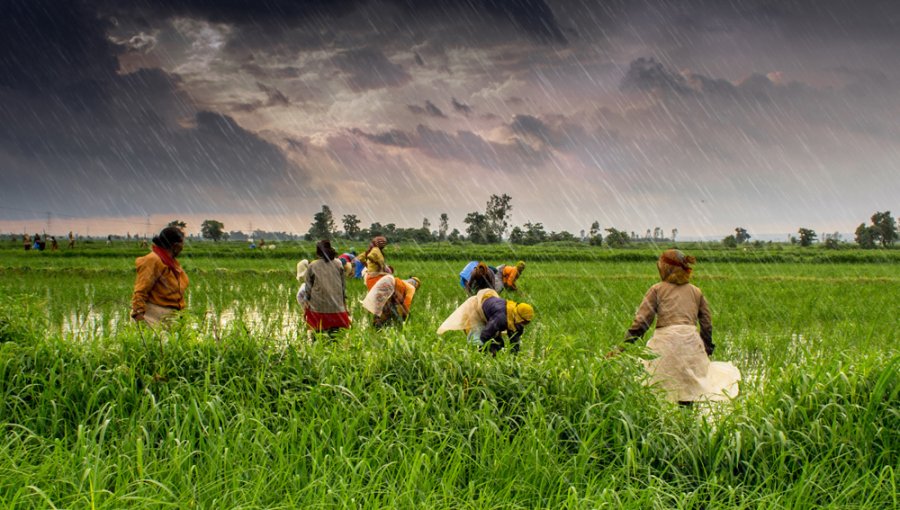 In a new study published in the inaugural edition of The Lancet Planetary Health, researchers led by the London School of Hygiene & Tropical Medicine identified moderate shifts in typical Indian diets that could reduce groundwater use and benefit population health.

This modelling study, funded by Wellcome, is the first of its kind to investigate the potential role of dietary changes as a solution to decreasing groundwater availability.  The research identifies possible changes to typical diets that could reduce the amount of groundwater required in their production. Important changes include reductions in the consumption of wheat and a switch to consumption of fruit with lower water demands.  The results suggest that these moderate changes in diets, combined with improvements in agricultural technology, could increase the resilience of the food system as the Indian population grows.

Food production in India is heavily reliant on farming that requires a large amount of irrigation with groundwater. In some regions, groundwater is being depleted faster than it can be replenished.  As the population grows, the amount of groundwater available per person is predicted to decline by as much as 30% by 2050.  There is an urgent need to understand how water use in agriculture can be managed to ensure that a rapidly growing population can be fed healthily with dwindling groundwater resources.

Importantly, the models suggest that shifting to diets with a lower groundwater requirement would also be broadly beneficial for health. The health modelling shows that reductions in the risks of various non-communicable diseases, especially coronary heart disease, could be expected from the proposed changes in diets.  These outcomes are largely due to the increase in fruit and vegetable consumption.  Furthermore, the dietary changes are also accompanied by a reduction in diet-related greenhouse gas emissions.

Dr James Milner, lead author from the London School of Hygiene & Tropical Medicine, said: “Food systems worldwide are likely to face increasing pressure as populations increase and water availability declines. In India, the proportion of freshwater available for agricultural production may already be unsustainably high and water availability per person is likely to decline significantly over the coming decades. Our study is the first to investigate the potential of changing diets as a solution to decreasing freshwater availability and finds modest dietary changes could help meet the challenge of developing a resilient food system in the country.”

Prof K Srinath Reddy, President of Public Health Foundation of India said: “The food system in India will be under increasing pressure as the population increases and global environments change.  We are already seeing increased risk of drought in parts of the country and this will have an impact on the ability of India to produce healthy and nutritious diets for all.  This new analysis highlights the importance of groundwater for Indian agriculture and shows that, in the future, dietary choices will have an important role to play in the resilience of the Indian food system.”

Researchers studied five distinct Indian dietary patterns derived from the Indian Migration Study, which surveyed more than 7,000 people in both urban and rural settings from 2005-2007.  The researchers changed the makeup of these diet patterns to meet the predicted reductions in groundwater availability per person in 2025 (18%) and 2050 (30%).

The optimised diets suggested by the researchers meet World Health Organization nutritional guidelines and are designed to minimise changes from current eating patterns.  Generally, the diet changes suggested involved consuming less wheat and dairy, and more fruits, vegetables and pulses.  The models also suggested switching the types of fruit consumed, for example, fruits like oranges and apples have a much lower water footprint involved in their production than mangoes.

While fairly modest changes were needed to meet an 18% reduction in freshwater use by 2025, the researchers stressed that meeting the 30% reduction target by 2050 would require more drastic changes.  For example, wheat-based diets have a large groundwater footprint because, unlike rice that is typically grown during wet seasons, wheat is grown in the dry season and requires irrigation. Reducing groundwater requirements for wheat-based diets therefore involves either a large reduction in wheat consumption or major changes to production methods.

Study author Prof Alan Dangour from the London School of Hygiene & Tropical Medicine said: “With water resources predicted to decline dramatically in the future, we need to identify potential solutions that future proof the Indian food system and ensure that it can deliver healthy and nutritious diets.  Our new research presents one potential solution. Food systems are complex and there will never be a ‘fix-all’ solution, but our models suggest that modest dietary changes that are broadly beneficial for both the environment and health are a good place to start.”

The research demonstrated that many of the optimised diets would also lead to overall improved population health outcomes.  Where the suggested dietary changes most strongly improved the nutritional profile of the diets, the health benefits were shown to be larger. For example, increasing the diversity of diets consumed largely by poorer, more rural communities resulted in more than 13,500 additional life years per 100,000 people, largely due to a reduce risk of heart disease and cancer.

Conversely, reducing the groundwater footprints of some highly diverse diets, typically consumed by wealthier more urban communities, had a slight negative health effect due in part to reduced fruit and vegetable consumption.

The first edition of The Lancet Planetary Health also includes articles by Professor Andy Haines, exploring the wide health co-benefits of climate action, and by Prof Dangour and colleagues on food systems, nutrition, health and the environment.