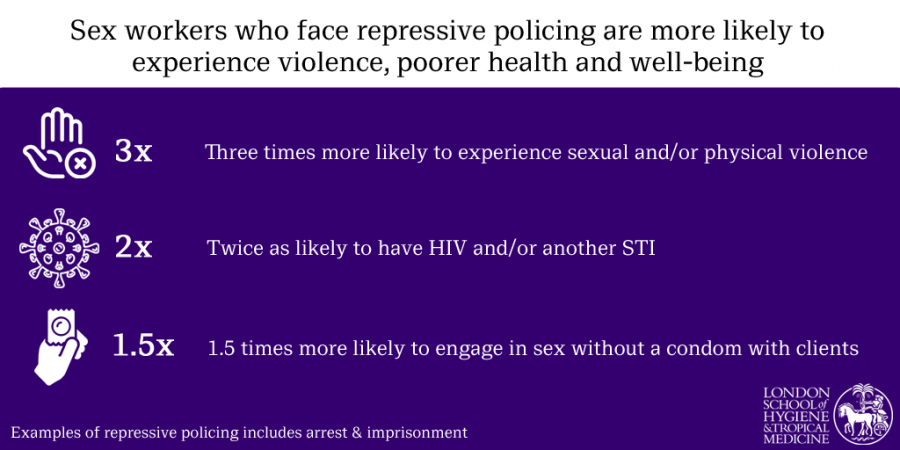 Sex workers who face repressive policing are more likely to experience violence and poorer health and well-being, according to new research published in PLOS Medicine.

Led by the London School of Hygiene & Tropical Medicine (LSHTM), the systematic review found that sex workers who had been exposed to repressive policing (such as recent arrest, prison, displacement from a work place, extortion or violence by officers) had a three times higher chance of experiencing sexual or physical violence by anyone, for example, a client, a partner, or someone posing as a client. They were also twice as likely to have HIV and/or other sexually transmitted infections (STIs), compared with sex workers who had avoided repressive policing practices.

The few studies that looked at emotional health showed that sex workers who had experienced recent incarceration, arrest, or increased police presence were also more likely to have poorer mental health outcomes.

From what is the first systematic review to examine the impacts of criminalisation on sex workers’ safety, health, and access to services, the researchers conclude that reform of demonstrably harmful policies and laws is urgently needed to protect and improve sex workers’ safety, health and broader rights. Data included in the review came from 33 countries, including the UK.

The study is particularly timely given the active political interest in models of decriminalisation of sex work (introduced in New Zealand) and the criminalisation of the purchase of sex (currently law in Canada, France, Iceland, Northern Ireland, Norway, Republic of Ireland and Sweden).

To gather literature, the team searched databases of peer-reviewed journals from 1990 to 2018, for research on sex work, legislation, policing and health. Only studies reporting data provided by sex workers themselves were included.

The researchers reviewed the effects of criminalisation and police repression, examples of which included recent arrest, prison, displacement from a work place, confiscation of needles/syringes or condoms, and extortion, sexual or physical violence by police officers.

Using techniques including meta-analysis (pooling results from included quantitative studies), the team were then able to estimate the average effect of being exposed to repressive policing compared to no such exposure. The team also identified the main pathways through which these effects occurred in different legislative contexts (synthesising results of included qualitative studies).

Sex workers who had avoided repressive policing were 30% less likely to engage in sex with clients without a condom – a risk factor for HIV and STIs. Although prevalence is highly variable in different contexts, in low and middle income countries, sex workers are on average 13 times more at risk of HIV[1], compared to women of reproductive age (age 15 to 49), so their ability to negotiate condom use is important.

Lucy Platt, lead author and Associate Professor in Public Health Epidemiology at LSHTM, said: “Our important review highlights the impact of sex work laws and policing practices on the safety and health of individuals who sell sex around the world.

“Where some or all aspects of sex work were criminalised, concerns about their own or their clients’ arrest meant that sex workers often had to rush screening clients negotiating services, or work in isolated places, to avoid the police. This increased sex workers’ vulnerability to theft and violence.

“At the same time, police frequently failed to act on sex workers’ reports of such crimes, or blamed and arrested sex workers themselves, meaning that offenders could operate with impunity and sex workers were reluctant to report to the police in future. These experiences were reported time and again across a wide range of countries.” 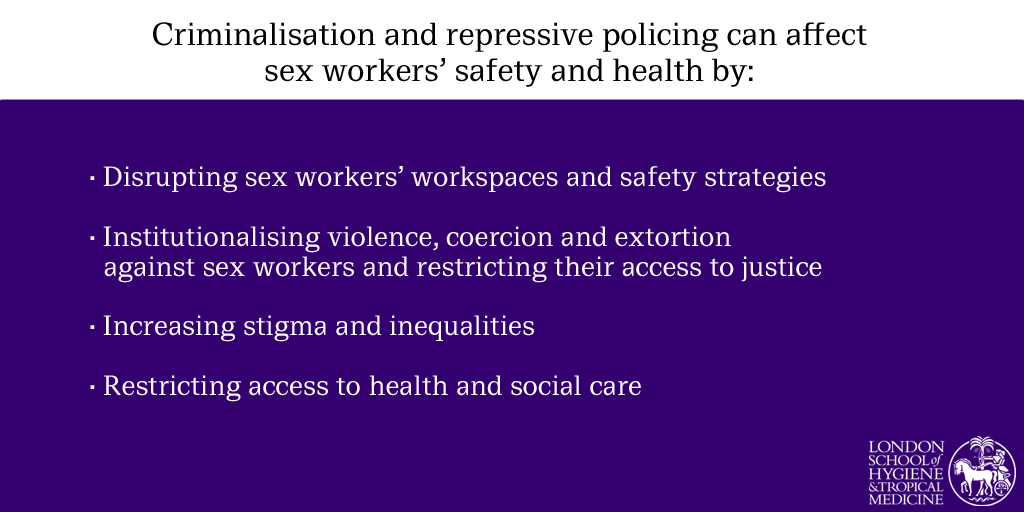 The research also showed that repressive policing not only further marginalised sex workers as a population, but it also reinforced inequalities within sex-working communities, as police often targeted specific groups or work settings.

Research in Sweden and Canada showed that criminalising sex workers’ clients did not improve sex workers’ safety or access to services. In New Zealand, following decriminalisation, sex workers reported being better able to refuse clients and insist on condom use, amid improved relationships with police and managers. However, migrants continue to be excluded from this system. Studies from Guatemala, Mexico, Turkey and Nevada (USA), showed how regulatory models exacerbate disparities within sex worker communities. They enabled access to safer conditions for some but excluded the majority.

Pippa Grenfell, co-author and Assistant Professor of Public Health Sociology at LSHTM, said: “It is clear from our review that criminalisation of sex work normalises violence and reinforces gender, racial, economic and other inequalities. It does so by restricting sex workers’ access to justice, and by increasing the vulnerability, stigmatisation and marginalisation of already-marginalised women and minorities.

“Decriminalisation of sex work is urgently needed, but other areas must also be addressed. Wider political action is required to tackle the inequalities, stigma and exclusion that sex workers face, not only within criminal justice systems but also in health, domestic violence, housing, welfare, employment, education and immigration sectors.”

The authors say that while legislative reforms and related institutional shifts are likely to require long-term efforts, immediate interventions are also needed to support sex workers. This includes the sustained and renewed funding and scale-up of specialist and sex-worker-led services that can help to address the multiple and diverse health and social care needs of people who sell sex around the world.

The research team acknowledge the limitations of their review, including only a small number of studies that examined contexts where sex work is decriminalised or the purchase of sex was criminalised. There were also few studies conducted with trans women or men, or that examined the interaction between criminalisation and other social factors that affect sex workers’ health and safety.

Funding for the study was provided by Open Society Foundations, and by the UK Department for International Development as part of STRIVE, a six year programme of research and action to tackle the structural drivers of HIV.