Pneumonia: how rethinking vaccination strategies can save lives 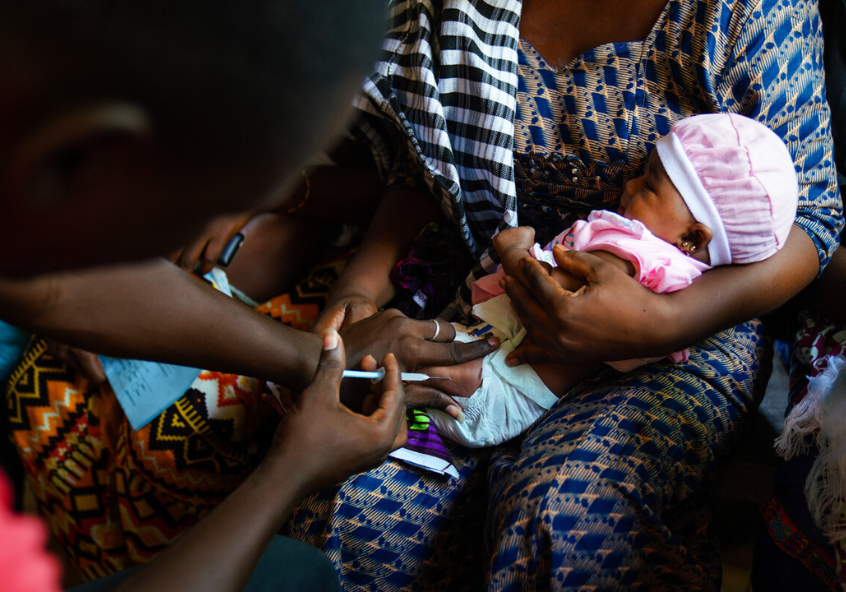 What are the issues around pneumonia, particular in displaced populations?

Lower-respiratory tract infections (LRTIs) are a leading cause of death in children under five worldwide, with increased rates in displaced populations.

We believe that a substantial proportion of these infections are caused by Streptococcus pneumoniae (the pneumococcus); a common bacterium that can cause pneumonia and meningitis.

Pneumococcus mainly affects the young and old, with many factors that affect its transmission such as malnutrition and overcrowding present in displaced populations.

Pneumococcal conjugate vaccines (PCVs) are very effective in preventing pneumococcal transmission and disease. While they are widely used in routine national vaccination programmes around the world, they are rarely used in displaced populations.

What are the challenges of using PCV in displaced populations?

Routine vaccination can be challenging for many reasons, including intermittent access to the population, disruption of the cold-chain, or safety of healthcare workers. Other vaccines such as measles or polio are therefore often delivered through campaigns targeting a wide age group, but there is little guidance on delivering PCVs.

The WHO recommends using PCV in children under one and considers its use for children under five during humanitarian crises, but this is based on very little evidence.

What did your research find?

To fill the evidence gap, we used mathematical modelling to compare the likely impact of different PCV campaigns. We conducted a survey in a camp for internally displaced people in Somaliland to collect data on how people were mixing with each other, their movements in and around the camp, and who was carrying pneumococcus. While Somaliland is a safe country not affected by conflict, there are a large number of internally displaced persons due to drought and food insecurity.

Preliminary results show that the majority of the impact of a PCV campaign in these settings comes from indirect protection. This means that by interrupting transmission, vaccination prevents new infections, deaths and disease. So, to have the most impact, a PCV campaign should target not only the children most at risk of severe disease (those aged under two), but especially those who drive transmission (mainly older children, those aged two to five and five to 10).

The impact of a vaccination campaign will depend on a number of factors, including the local epidemiology and social behaviour, but we found that any campaign with at least 85% coverage targeting children under five could prevent up to a third of all pneumococcal disease and mortality in a range of different settings over a two-year period. A campaign targeting all children under 15 may even prevent 40% to 50%, depending on the setting.

How will this affect vaccine policy and guidelines in the future?

We are now finalising our results and sharing them with partners. We recently presented the findings to the WHO Immunization and Vaccines related Implementation Research Advisory Committee (IVIR-AC), and hope they will help to update global guidelines and improve PCV use in displaced settings, which is still underutilised.

Will your research be put into practice?

We received funding for a follow-up project from the Bill and Melinda Gates Foundation and are starting a vaccination campaign in the same IDP camp in Somaliland. This will provide high-quality evidence, help us validate our modelling work and understand the acceptance of PCV campaigns more.

We have also just completed a survey in the nearby city of Hargeisa, to understand pneumococcal transmission in the non-displaced population. We hope that this will help the Somaliland government introduce PCV in their routine national vaccination schedule, as it is one of the few countries worldwide in which PCVs are not yet available.

What were some of the challenges of working in this environment?

We knew how challenging research can be in humanitarian settings, which is why there is such a lack of data from certain populations. When we started this project in 2018, it was very challenging to find a suitable population in which we could conduct the primary data collection. We have been very fortunate to work in Somaliland and to have such strong partnerships with their Ministry of Health and Save the Children.

We encountered a fair few challenges, especially working during the worst of the pandemic when we tried to ship our samples to the lab at the Murdoch Children’s Research Institute in Australia. Eventually, we were able to arrange the shipment via Ethiopia and Kenya, but it took us two years to ship the samples for the first survey.

We hope that our methods and evidence can be applied for other infections and in other settings. Worldwide, UNHCR estimates that over 80 million people are displaced, a number that has doubled in the past 10 years. Novel interventions to protect the health and welfare of affected communities are urgently needed.