London School of Hygiene & Tropical Medicine https://lshtm.ac.uk/themes/custom/lshtm/images/lshtm-logo-black.png Thursday 22 September 2022
Public health epidemiologist Ruwan Ratnayake, who has previously worked for the World Health Organization and International Rescue Committee during cholera outbreaks in Haiti, South Sudan and Chad, comments on the importance of surveillance and response to prevent and control disease outbreaks in Pakistan. 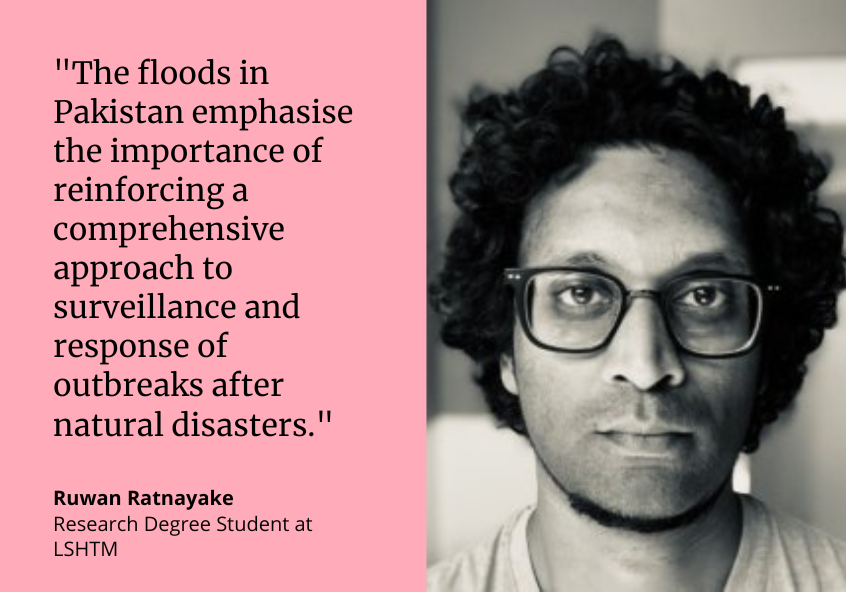 Pakistan is one of the most epidemic-prone countries in the world, with ever-present outbreaks of dengue, malaria, and the persistence of poliomyelitis transmission. Now, unprecedented flooding due to deadly monsoon rains is burdening 33 million of the country’s 222 million population.

Flooding persistently exposes populations to standing water and leads to pervasive faecal contamination in wells and drinking water. This promotes the emergence of waterborne diseases including cholera, hepatitis E, and typhoid, giving rise to large-scale outbreaks that are very difficult to control.

Less appreciated is the sustained and sometimes delayed effects of flood damage on the proliferation of animal and insect vectors, leading to the emergence of leptospirosis (via rodents) and stimulating the transmission of mosquito-borne diseases, such as dengue and malaria.

In Pakistan, epidemics will remain difficult to control as the flood waters will take months to recede and result in constant exposure and disruption to disease control efforts. The swift resettlement of internally displaced persons (IDPs) into shelters, an obvious priority, will make it easier to conduct disease control, though it brings other risk factors like overcrowding.

As new settlements are established, the national Disease Early Warning System (DEWS), which was very effective in providing consistent surveillance, rapid detection of outbreaks and response during the floods in 2010, should be reinforced to respond rapidly to outbreaks and provide insight into the evolving epidemiology of the situation.

Increasing water availability and quality is critical for prevention of waterborne disease outbreaks while the anticipated near-total disruption of disease control systems – including case-finding and routine and mass vaccination for measles and poliomyelitis – should stimulate all opportunities to conduct mass vaccination campaigns in hard-to-reach, IDP communities as soon as possible. Our ongoing operational research is relevant here – concerning the reinforcement of epidemic surveillance when surveillance is disrupted using the knowledge and access of community health workers, and developing emergency surveillance and rapid response mechanisms for emerging cholera outbreaks.

Given the scale and the sustained length of the flooding, Pakistan will require an even more comprehensive approach to surveillance and response of epidemic-prone disease outbreaks, a strategy for long-term prevention of outbreaks and endemic disease among displaced populations, and the resumption of critical polio and other disease control programmes. It goes without saying that Pakistan will need ample humanitarian support to do so.