Dengue in France – what you need to know

London School of Hygiene & Tropical Medicine https://lshtm.ac.uk/themes/custom/lshtm/images/lshtm-logo-black.png Friday 21 October 2022
This year’s dengue outbreak in France is the most severe yet. Oliver Brady, who leads the Dengue Mapping and Modelling group, gives us the facts about the disease. 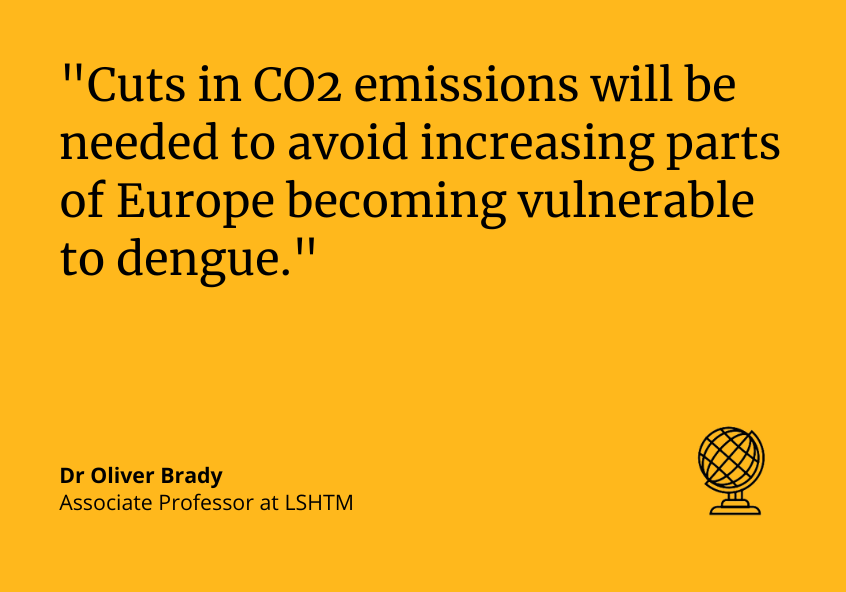 What are the symptoms of dengue and what health impacts does it have globally?

While the majority of dengue infections cause mild flu-like symptoms or are even asymptomatic, some people experience headaches, severe joint pain and even internal bleeding that can lead to death. Globally dengue causes 50-100 million cases a year across over 120 countries. Many of these are concentrated in high profile outbreaks that are difficult to control.

In recent years where has dengue commonly circulated?

Dengue is a disease that is ubiquitous throughout the topics and subtropics, with most countries experiencing outbreaks every 2-5 years of varying magnitude. The last major global epidemic occurred in 2019 with over 4.7 million cases reported. Since March 2020, there has been a large decline in dengue across the world which has closely followed government restrictions and behavioural changes in response to the COVID-19 pandemic. As these restrictions have been relaxed in 2022 we have seen a large unexpected rebound of dengue in many countries (for example, Vietnam and the Philippines).

What factors are thought to be behind dengue spreading to France?

Southern France and other parts of the Mediterranean have been at risk of dengue since the early 2000s when the Asian tiger mosquito (Aedes albopictus) arrived then spread through Europe. Only certain times of the year are hot enough for the mosquito to transmit dengue efficiently enough to cause an outbreak, but Europe’s dengue season is only increasing each year with climate change. Southern France has the right combination of climate, a stable mosquito population and a high volume of travellers returning from trips to tropical dengue-present countries to cause outbreaks. Several dengue outbreaks have been reported in Southern France over the past 15 years, but this year’s is the most severe yet, although we don’t fully know why yet.

How might the Asian tiger mosquito (Aedes albopictus) be involved in this outbreak?

Dengue viruses are typically spread by one of two mosquito species Aedes aegpyti or Aedes albopictus. In tropical countries Aedes aegypti is thought to be responsible for most of the transmission of dengue viruses due to its high preference for feeding frequently on humans, however its eggs can’t survive the cold winters in Europe, so currently we only have Aedes albopictus in mainland Europe. While Aedes albopictus is classically thought of as a less efficient transmitter of dengue, these recent outbreaks in France have brought this into question.

Should we be worried about the recent rise of local cases in France?

Yes because, while local dengue cases have been consistently occurring in France since 2010, outbreaks have been limited to less than 10 cases and quickly contained. This year, over 30 cases were reported from one outbreak cluster. Increased dengue surveillance and mosquito control appear not to be having enough of an impact against an increasingly suitable environment for transmission in Southern France. Furthermore, with climate change and increasing global trade we may see more and more parts of Europe with the right combination of factors for dengue outbreaks. The experience of Southern France shows that European countries are not immune from dengue and, like all other countries, may struggle to contain dengue.

What can be done to prevent the spread of dengue to the rest of Europe and the UK?

For the areas in the UK and Northern Europe, the focus is on preventing further expansion of Aedes albopictus through mosquito surveillance, particularly around container ports and other major goods corridors. UK authorities have detected Aedes albopictus at UK ports multiple times over the past few years, but no local populations have established in the UK yet. For countries that already have Aedes albopictus, it is important to accurately diagnose dengue when it occurs (as it is often misdiagnosed as flu) and ensure local mosquito control is enacted quickly to stop the epidemic from spreading. However, as the example of dengue in southern France has shown us, these increasingly difficult adaptation strategies can only take us so far and long-term cuts in CO2 emissions will be needed to avoid increasing parts of Europe becoming vulnerable to dengue.