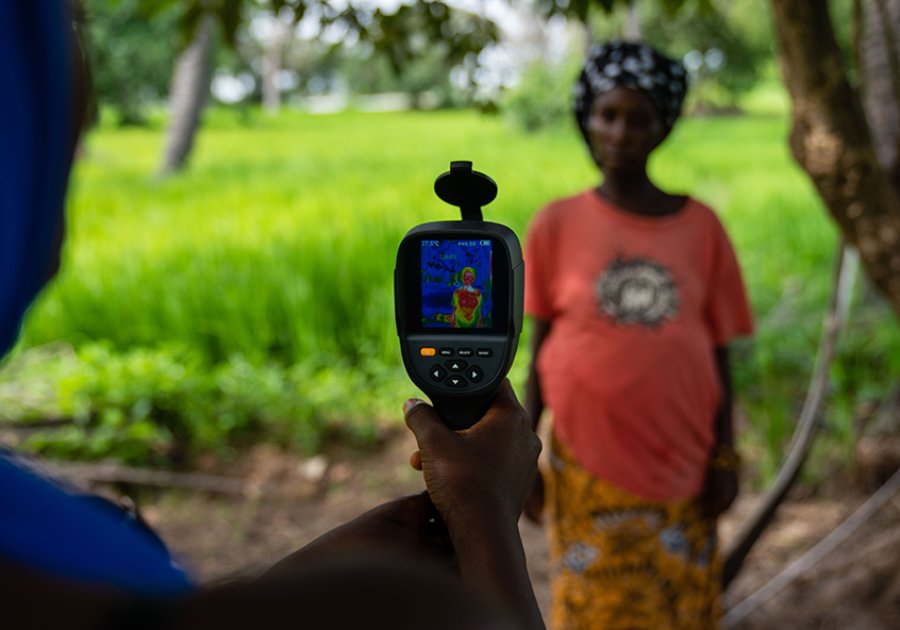 The foetuses of women working in the fields in extreme heat can show signs of strain before their mothers are affected, new research has shown.

The study, which involved 92 pregnant subsistence farmers in The Gambia, is the first to measure the impacts of heat stress on the foetuses of manual workers.

Findings include that for every degree Celsius increase in heat stress exposure there was a 17% increase in foetal strain as indicated by raised foetal heart rate and slower blood flow through the umbilical cord.

Overall, the team led by researchers at the Medical Research Council (MRC) Unit The Gambia at the London School of Hygiene & Tropical Medicine (LSHTM) and LSHTM found that even a modest rise in body temperature from performing manual tasks in extreme heat produced evidence of physiological strain in both mother and foetus.

The research is published in The Lancet Planetary Health.

Dr Ana Bonell, Wellcome Trust Global Health Clinical PhD Fellow at LSHTM and lead author, said: “Climate change has led to increasingly extreme temperatures worldwide and Sub-Saharan Africa is particularly vulnerable to climate impacts. Our study found that pregnant subsistence farmers in The Gambia commonly experience levels of extreme heat above recommended outdoor working limits, and that this can have significant effects on their health and the health of their babies. The results suggest we have to find effective interventions to protect these women and reduce adverse birth outcomes.”

Study author Jainaba Badjie from MRC The Gambia at LSHTM said: “Despite the growing scientific evidence linking maternal heat exposure to adverse birth outcomes, including premature birth, low birth weight, and still birth, up until now there has been little research into the physiological mechanisms responsible for these outcomes. We urgently need to understand these mechanisms so that we can find better ways to support mothers and babies in these conditions.”

For the study, participants in West Kiang, The Gambia, were encouraged to perform their usual daily tasks during field visits and were fitted with a wearable device to record maternal heart rate, skin temperature and estimated energy expenditure.

Portable ultrasound devices were used to record foetal heart rate, umbilical artery blood flow at the start of each visit (used as the baseline), at a mid-point during a worker’s shift, and then at the end of the shift.

Maternal symptoms of heat illness were also collected. Nausea, vomiting, headache, dizziness, weakness, muscle ache, fatigue and dry mouth, were common among participants, with over half of the women reporting that they experienced at least one symptom during field visits.

The researchers suggest that an important physiological factor to consider in future work is the diversion of blood from the placenta to the skin which appears to occur at lower core temperatures than highlighted by previous studies. The findings also highlight the need for further work to identify and evaluate interventions that will help pregnant agricultural workers in Sub-Saharan Africa to adapt to working in extreme heat.

The authors noted several limitations to the study, including the impact of the COVID-19 pandemic on the sample size, potential acclimatisation of the participants to high levels of heat stress, and the fact that the population has poorer birth outcomes than the global average which may impact on the generalisability of the findings.

The research was supported by The Wellcome Trust.