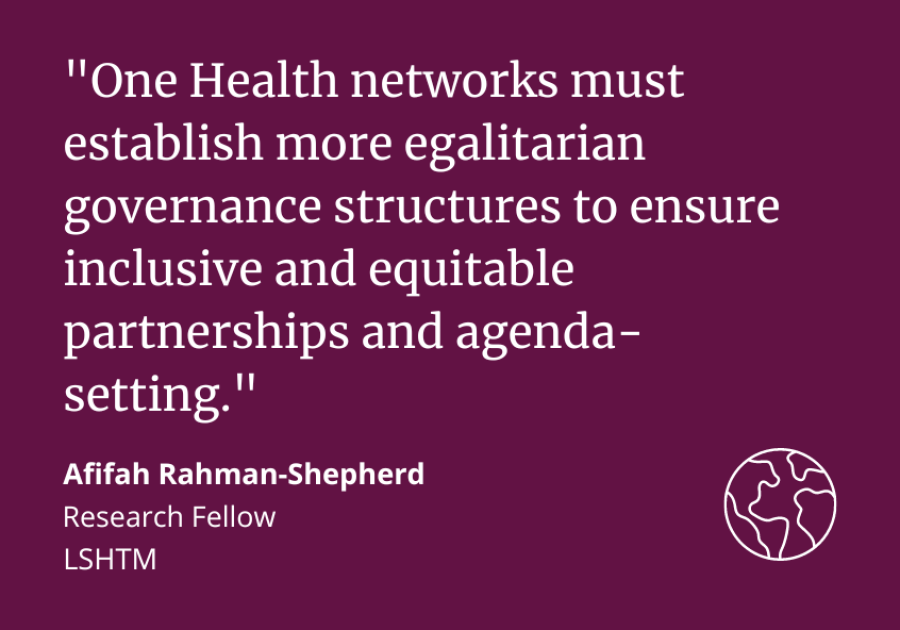 The COVID-19 pandemic has brought into sharper focus the interconnectedness of human health, animal health, and the environment, according to a new Series published in The Lancet.

In doing so, the pandemic has exposed weaknesses in preparedness for public health crises caused by poor coordination between these three spheres — a concept that is core to a ‘One Health’ approach.

Across four papers, international experts, including from the London School of Hygiene & Tropical Medicine (LSHTM), analysed the current landscape of preventive, surveillance, and response measures to potential public health emergencies, while illuminating how effective adoption of One Health approaches could improve global health security.

The Series presents evidence of the benefits of a One Health approach across a range of hazards, identifying major challenges to effective operationalisation, and providing a comprehensive set of policy and technical recommendations.

“It is imperative that One Health networks establish more egalitarian governance structures to ensure inclusive and equitable partnerships and agenda-setting that can address the breadth of One Health issues and serve communities most affected by emerging and existing health security threats.”

A key study in the Series identified issues affecting the sustainability and equity of operationalising One Health through an analysis of such global networks, building on earlier methodology developed by researchers at LSHTM.

The analysis revealed gaps and disparities in the geographic distribution, priorities, and partnership structures of One Health networks, which, without redressing, restrict the extent to which a multisectoral One Health approach is being practiced in reality. For example, the results showed that there are more networks headquartered or operational in Europe than in any other region worldwide, there is insufficient work focusing on upstream drivers of disease emergence and One Health networks are engaging fewer community stakeholders than other types of stakeholders (for example, academic institutions and government bodies).

“The One Health approach, as currently operationalised, replicates many of the same asymmetries in power and privilege that characterise the field of global health. This is evident not only in the loci of One Health networks’ decision-making, but also in the voices and priorities that are valued. The issue is not only one of equity but also of how effectively we are able to prevent health emergencies.”

Together the papers in this Series provide a greater understanding of the benefits that can only be achieved through coordination from different sectors working together, and identify ways to address weakness in the operationalisation of One Health.

“There is no more important time to show what is already being done at the human-animal-environment interface – and what still needs to be done – to prevent or mitigate the emergence of another virus of animal origin. There must be a shift in the paradigm from rapid detection and response (and the associated human and economic costs), to prevention at or near the source.

“This Lancet Series is timely and practical because it highlights experience not only in industrialised countries, but in lower and middle income countries as represented by its authors. It will be useful to both political and technical leaders, and provides a way to move the sentinel population for emergence upstream, from humans to the source in nature.”

The Lancet are hosting a free and open-to-all webinar launch event for the Series at 13:00-15:00 GMT on Thursday 26 January. Register to attend here.

If you are interested in studying for the MSc in One Health: ecosystems, humans and animals at LSHTM, registration is now open for our virtual open days taking place 7-8 February.