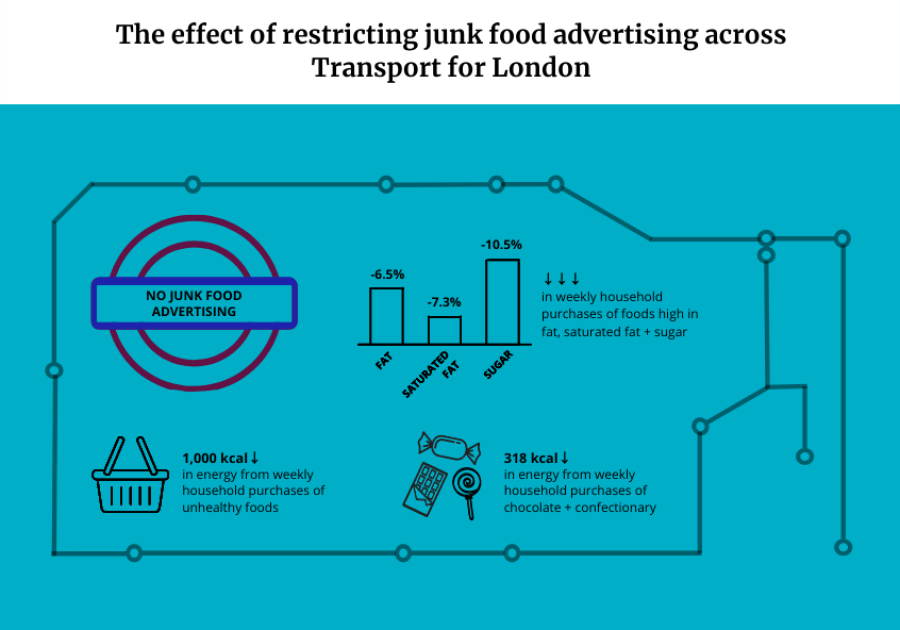 Restricting the outdoor advertising of high fat, salt and sugar (HFSS) foods and drinks across the Transport for London (TfL) network is estimated to have significantly decreased the average amount of calories purchased by households every week from these products, according to new research in PLOS Medicine.

Led by the London School of Hygiene & Tropical Medicine (LSHTM), the study used data on nearly two million grocery purchases of HFSS foods and drinks to estimate the effect of the policy, which saw restrictions on advertising across the TfL estate. This includes the London Underground, the TfL Rail network, and at bus stops.

The team found some limited indication that effects were larger in households with individuals living with obesity.

Dr Amy Yau, from LSHTM and study first author, said: “Many governments and local authorities are considering advertising restrictions to reduce consumption of high fat, salt and sugar (HFSS) products as part of obesity prevention strategies. However, evidence of the effectiveness of such policies, especially away from broadcast media, is scarce.

“Our study helps to plug that knowledge gap, showing Transport for London’s policy is a potential destination for decision-makers aiming to reduce diet-related disease more widely.”

Policies that restrict the advertising of HFSS products have been promoted as potentially effective tools to reduce the purchase and consumption of HFSS products, with the aim of improving diet, reducing obesity and diet-related diseases and tackling health inequalities.

In November 2018, restrictions on the outdoor advertising of HFSS foods and drinks across the Transport for London (TfL) network were announced by the Mayor of London and were fully implemented on 25 February 2019.

The team behind this new research wanted to find out if this policy could contribute to improvements in diet by reducing energy and nutrients purchased from HFSS products. In the absence of dietary data, the team used actual household food and drink purchase data collected by Kantar, a commercial consumer data company, to evaluate the impact of the intervention.

The study ran from 18 June 2018 to 29 December 2019, and compared average weekly purchases of HFSS products in 977 London households to an estimate of what would have happened without the policy. This estimate was based on the trend in purchasing in London before the policy and changes seen in households in a control area (North of England) after the policy was implemented, which accounts for secular trends and seasonal variation in HFSS purchasing.

After controlling for key factors including sex, age, socioeconomic position, number of adults and children in the household, and festivals such as Christmas, they estimated the changes in household purchases of energy and nutrients from HFSS products associated with the TfL advertising policy.

Assuming an average household size of 2.6 people in the sample, and an even energy distribution, the team estimated that the intervention reduced energy purchases by 385 calories per person per week - equivalent to every Londoner in the study purchasing about 1.5 fewer standard size bars of milk chocolate per week.

Professor Steven Cummins, from LSHTM and Chief Investigator of the study, said: “The impacts we observed are larger than those reported for the UK Soft Drinks Industry Levy, those predicted for a 9PM advertising watershed on HFSS foods or a 20% tax on sugary snacks.

“The findings are particularly significant in light of the Health Bill currently going through Parliament, as they provide further evidence for the effectiveness of advertising restrictions and help support the case for the Government’s proposed ban on the online advertising of high fat, salt and sugar foods and drinks.”

The team say that while the results are encouraging, the finding are in the context of actual increases in purchases of HFSS products in intervention and control areas over the study period, meaning intervention was effective in reducing growth of HFSS purchases rather than achieving absolute reductions in HFSS purchases.

Professor Cummins said: “More work is needed, but our study suggests these types of policies could have a significant impact on reducing consumption of high fat, salt and sugar foods, and offer a potentially effective intervention in other important public health policy areas such as the regulation of alcohol and gambling advertising.”

The Mayor of London, Sadiq Khan, said: “It is a scandal that London has such high levels of child obesity and, that in a city as prosperous as ours, where you live and the amount you earn can have such a huge bearing on whether you have access to healthy and nutritious food.

“There is no denying that advertising plays an enormous role in putting less healthy food and drink in the spotlight, and I am pleased to see the positive impact these groundbreaking measures have had, leading to a real reduction in the amount of junk food being purchased.”

The authors acknowledge limitations of the study, including that it was focused on products to take home (grocery purchase) and did not include takeaway purchases from fast-food outlets, restaurants, cafes etc. Effects may well be larger if takeaway purchases had been included.