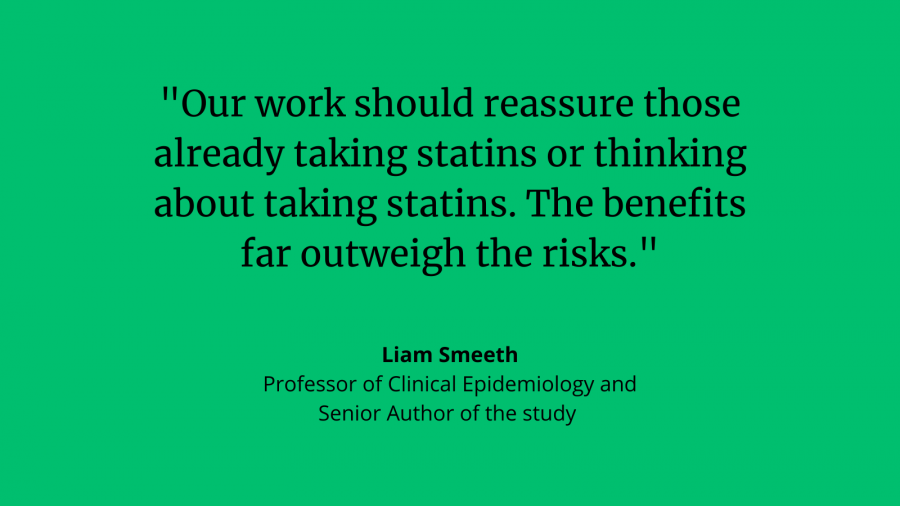 ­Statins have no overall effect on the frequency or severity of muscle symptoms compared with placebo in people who had previously reported severe muscle symptoms when taking the drugs, according to a new study in The BMJ.

Most people completing the trial, led by the London School of Hygiene & Tropical Medicine (LSHTM), planned to restart treatment with statins.

Liam Smeeth, Professor of Clinical Epidemiology at LSHTM and study senior author said: “We know statins reduce heart disease and strokes. More than two million people in the UK are eligible to be prescribed these life-saving drugs by their doctor. It is therefore vital that we have accurate data on the symptoms people are experiencing while taking statins, so that patients and doctors can make informed treatment choices.

“Many patients stop taking statins due to less severe symptoms, such as muscle pain or fatigue, exposing them to increased cardiovascular disease risk. However, trials have not been able to show if these symptoms are more common in patients taking statins or placebo.”

To address this uncertainty, the team, funded by NIHR, set out to establish the effect of statins on muscle symptoms in people who had previously reported muscle symptoms when taking statins.

Their findings are based on 200 patients (average age 69.5 years) from 50 general practices in England and Wales who had recently stopped or were considering stopping treatment with statins because of muscle symptoms.

Each patient was part of an individual randomised, placebo controlled trial (known as an n-of-1 trial). When combined, the results can be used to assess the overall effect of a treatment.

Patients who participated were randomly assigned to a sequence of six, two-month treatment periods during each of which they received either statins or a placebo. Neither patients, nor their GP knew which tablet they were receiving.

Adherence to the study drug treatment was high, with at least 80% of participants reporting taking their drug treatment “every day” or “most days” during each period.

At the end of each treatment period, participants rated their muscle symptoms, defined as pain, weakness, tenderness, stiffness, or cramp of any intensity, on a 0-10 point scale.

Overall, the researchers found no difference in muscle symptom scores between the statin and placebo periods.

They also found no differences for the effect of muscle symptoms on aspects of daily life (general activity, mood, ability to walk, normal work, relationships with other people, sleep, and enjoyment of life) between the statin and placebo periods.

Withdrawals because of intolerable muscle symptoms were 18 participants (9%) during a statin period and 13 (7%) during a placebo period.

Two thirds of those completing the trial said they planned to restart long term treatment with statins.

Liam Smeeth said: "Our work should reassure those already taking statins or thinking about taking statins. These drugs prevent heart attacks and save lives. In very rare cases they can cause muscle pain, but the vast majority of people will not be affected. The benefits far outweigh the risks."

The researchers highlight that they only assessed the effect of one type of statin on muscle symptoms, and that for some patients, pain scores may have been affected by treatment from the previous period.

However, they say this was a large, well-designed trial based on repeated measurements of muscle pain in patients who had experienced symptoms during statin treatment, allowing differences between statins and placebo to be assessed with greater accuracy.

The team also say that muscle aches and pains are common among the age group taking statins and might occur coincidentally with the use of statins, leading patients and clinicians to erroneously attribute pain to statins.

Dr Emily Herrett from LSHTM and study first author, said: “N-of-1 trials aren’t available for patients in the NHS, and there is a long way to go before this approach can be used in routine care.  But they could be a useful, scientific approach to help patients and doctors to figure out whether a drug is the cause of a patient’s symptoms."

Future work could focus on conducting n-of-1 trials for other types of statins and higher doses, and for other drugs which are associated with transient adverse effects.

Professor Melanie Davies, NIHR spokesperson said: “As this research makes clear, these important new findings will help to eliminate increased muscle pain and stiffness as symptoms from the list of possible side effects as a result of taking statins.

“NIHR recognised the uncertainties patients faced and funded this project to investigate whether there is any link between statins causing muscle symptoms. Thanks to this new found evidence, from a very well designed piece of research, patients will be far more likely to adhere to their prescribed treatments, which is crucial to controlling chronic conditions effectively.”