Pathogen trapping proteins can differentiate between types of bacteria 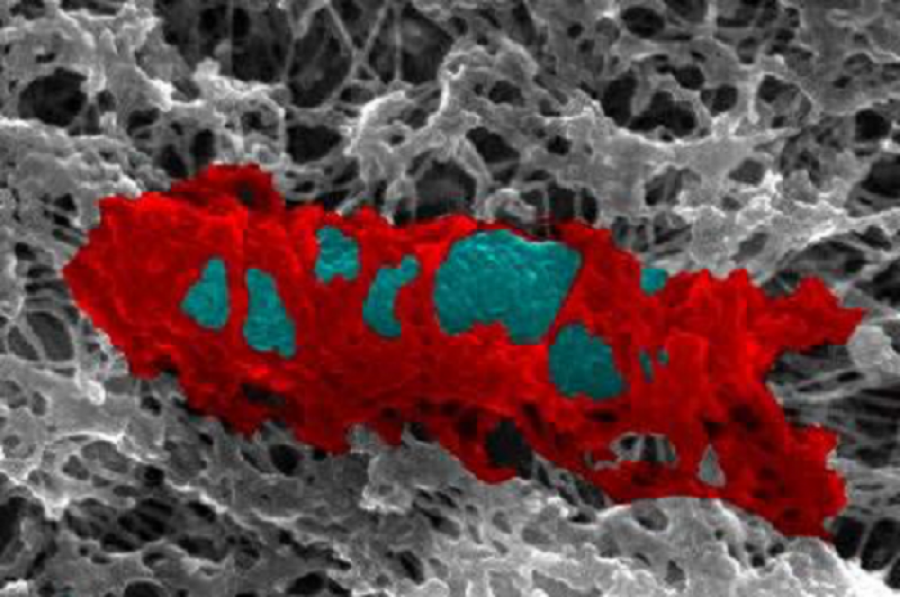 Proteins produced by our cells, called septins, can distinguish between different types of bacteria that they entrap in cage-like structures, according to new research published in Nature Communications.

Led by the London School of Hygiene & Tropical Medicine (LSHTM), the study reveals the molecular mechanisms that allow septins to identify pathogens. Previous work by the team showed that septins stop the spread of dangerous drug resistant infections by acting like cellular police, identifying and imprisoning bacteria.

This new research shows septins change their behaviour depending on whether or not the bacteria are dividing, the shape of their cell and the makeup of their bacterial surface. These important findings bring us closer to one day using septins as a targeted treatment for certain bacterial illnesses – particularly drug-resistant infections, which already kill over 700,000 people each year globally.

Septins are produced as part of our body’s defences against infection – they form cages that restrict the motility of bacteria so they cannot divide and spread, and flag them to our immune system to be destroyed. However, until now very little was known about how septins identified and interacted with bacterial cells.

Professor Serge Mostowy, lead author of the study, said: “The rise of ‘superbugs’ is one of the greatest global health challenges we face and new ways to control bacterial infection are urgently needed. Septins have the potential to be a new ‘natural’ weapon in the fight against AMR but knowledge gaps remain.

“This research is a vital piece of the puzzle, showing how septins can distinguish between different bacterial species. This ability could have enormous benefits if translated to a clinical treatment, as it could represent a new targeted approach against specific pathogens.”

In this new study, researchers demonstrated that septins would selectively bind to Shigella bacterial cells that were dividing. They also showed that they could do so without the presence of any other human proteins, indicating for the first time that septins could independently recognise targets on bacteria cell surfaces.

The team then attempted to identify some of these targets, by genetically engineering Shigella bacteria cells to remove certain components.

They discovered that the presence of a particular protein expressed by Shigella cells, called IcsA was essential for septin binding. They also demonstrated that septins would not bind to Escherichia coli cells, which are almost identical to Shigella except for the fact that they lack a virulence plasmid which encodes the IcsA protein.

These experiments also showed that lipopolysaccharide, produced on the surface of Shigella cells, offers some protection to the bacteria. This structure forms a physical barrier that is able to block the IcsA-mediated recognition of bacterial surfaces by septins, and reduce cage entrapment.

The scientists also revealed that, remarkably, septins are able to sense the micron-scale curvature of the poles of Shigella cells – meaning septins can identify bacteria cells from their shape – and would preferentially bind to the curved poles.

The team then compared how septins behave with cells of another important type of bacteria, called Mycobacteria. Using electron cryotomography – a type of electron microscopy where 3D images of cells are produced at sub-zero temperatures – the researchers were able to observe septins forming around the cells.

They found that septins bind much more quickly and evenly to the surface of Mycobacteria than Shigella, due to the different lipids and proteins present along its cell surface.

Dr Lobato-Márquez, who co-authored the study, said: “These are exciting results, made possible by state-of-the art technology and a fruitful collaboration with the laboratory of Professor Martin Pilhofer (ETH, Zürich). Much work remains, but this work is further evidence that septins have the potential to be used as a new treatment for bacterial infection.”

In their next steps, the team aims to identify more septin targets on the surface of different types of bacteria, and gain a better understanding of how septins interact with them for their assembly into cages. It is hoped this could lead to the clinical application of septins for bacterial diseases that are becoming harder to treat through resistance to existing antibiotics.