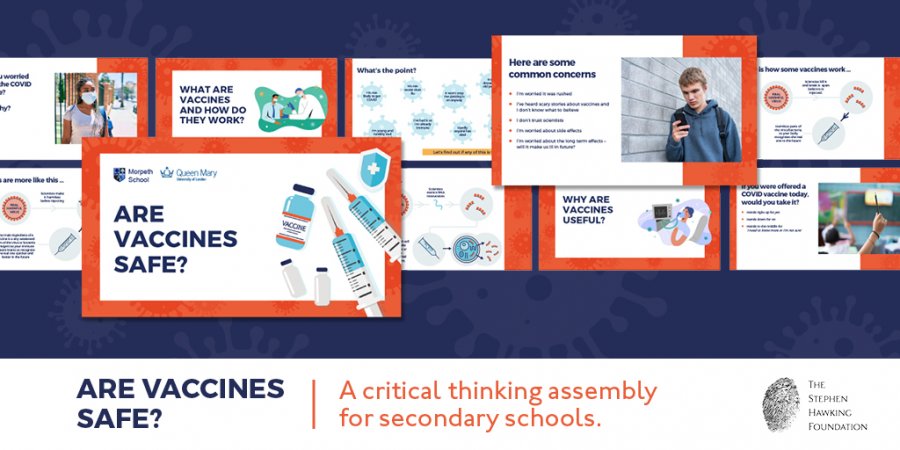 The London School of Hygiene & Tropical Medicine's (LSHTM) Vaccine Confidence Project has worked with the Stephen Hawking Foundation to launch a schools programme to enable children and their families to make informed decisions about vaccinations.

The first in a series of teaching aids published today focusses on the COVID vaccine and tackles head on conspiracy theories that have led to limited uptake in some communities.

Immunisation programmes for children have seen a decline every year since 2013. Teachers and researchers say this is in part caused by confusing information and unfounded conspiracy theories about vaccines.

The project is in conjunction with a school in one of the most deprived neighbourhoods in the country and also involves Queen Mary University of London. The programme involves devising simple and accurate materials aimed at enabling young people to better understand and question the role of vaccinations.

It is the brainchild of Ed Stubbs, a secondary school teacher at Morpeth School in Tower Hamlets, East London, who became concerned at a growing sense of fear in the classroom about vaccinations and the prevalence of ill-informed conspiracy theories.

Mr Stubbs said: “As a teacher previously working in inner-city Liverpool, and now in London, I have noticed students becoming increasingly fearful of vaccination. Some of my students and their families refuse their school vaccinations. I hear incorrect and 'conspiracy' information shared in my classroom. I fear that students' real and fictional concerns increase UK vaccine hesitancy.

“The charged and often accusatory debate about vaccination choices can make young people feel hesitant about voicing their concerns and seeking help in debunking false information. They fear critical judgement over their doubts. I decided to create a set of unbiased resources for use in schools.”

The learning materials which can be downloaded for free here.

The resources support the Stephen Hawking Foundation's goal to encourage science education. It also builds on Professor Hawking’s family links with the research centre as Professor Hawking's father was a researcher at LSHTM.

Lucy Hawking, Chair of the Stephen Hawking Foundation's Trustees, said: "We are so pleased by this collaboration, which aims to help young people gain a better understanding of immunisation programmes. We are dedicated to encouraging young people to engage with science. This important project aims to encourage school children to think about vaccine research and the progress in this field which is key to saving lives.”

Professor Heidi Larson, Director of the Vaccine Confidence Project, said: “I feel teachers are ideally placed to combat the UK’s falling vaccination rates. This programme has been carefully calibrated to include the insights of some of the leading scientists in this field but to make the information accessible to people of all ages and communities.”

An immunologist from Queen Mary University of London, doctors, primary school specialists, teachers and students who are from racialised backgrounds and a prominent member of the Somali community have also fed in to the teaching materials.

The resources are designed to promote critical thinking, ask big questions and provide reliable, well sourced information to help school age students investigate complex issues regarding science and society within a classroom setting. The vaccine project is the first of a projected series of such initiatives.