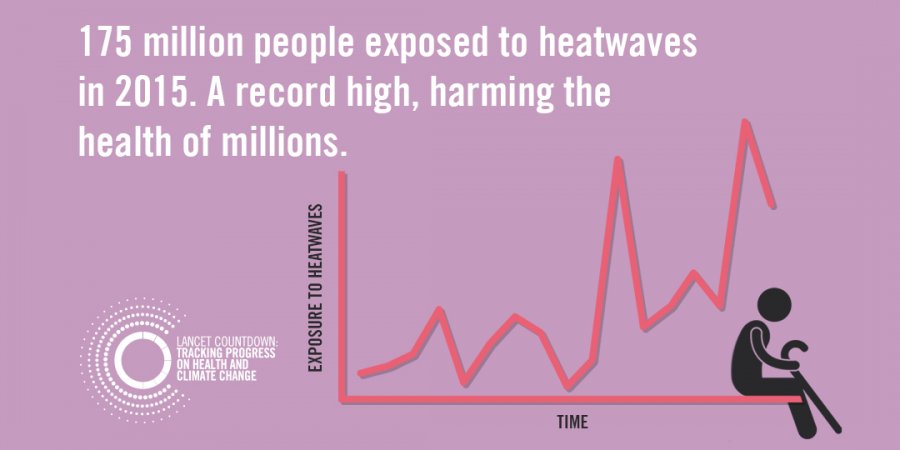 Climate change is already having an impact on health, impacting on labour productivity, the spread of infectious disease and exposure to air pollution and heatwaves, and affecting countries worldwide, according to the first report of The Lancet Countdown on Health and Climate Change.

The authors report a number of key findings, including:

While there is some evidence of early adaptation and mitigation strategies being implemented in some areas, the authors warn that further progress is urgently needed.

Sir Andy Haines, Professor of Public Health and Primary Care at the London School of Hygiene & Tropical Medicine said: “The Lancet Countdown report shows that growing numbers of people are being exposed to heatwaves and increasing heat stress sufficient to reduce their ability to work as a result of climate change. The health effects of climate change will fall most heavily on tropical and sub-tropical regions but the impacts will be felt worldwide.

“There are positive trends in moving towards a ’low carbon’ economy, for example reductions in coal combustion and growth in the proportion of electricity from clean renewable sources, but greater efforts to decarbonise the world economy are needed  in order to avoid temperature rises greater than two degrees C above the pre-industrial level.”

Some evidence suggests a decline in the use of private motorised vehicles in cities in the USA and Australia, but there has been little improvement for cities in emerging economies. While transport is still heavily dominated by gasoline and diesel, non-conventional fuels (eg biofuels, and natural gas) and electric vehicles are gaining traction, particularly in Europe and the USA. However, these figures remain modest when comparing the overall sales of electric cars per year. Electric vehicles are expected to reach cost-parity with traditional cars by 2018.

In 2015, more energy from renewable sources (solar, wind, hydroelectric) was added to the global energy mix, compared to fossil fuels. However, to remain on the pathway to reaching the Paris Agreement by 2050, this needs to increase by 2.5 times the current levels.

Global exposure to air pollution (fine particulate matter PM2.5) has increased by 11.2% since 1990, and about 71% of 2971 cities monitored by WHO exceed the recommended levels of PM2.5. The report concludes that momentum is building across a number of sectors, but that further progress is urgently needed.