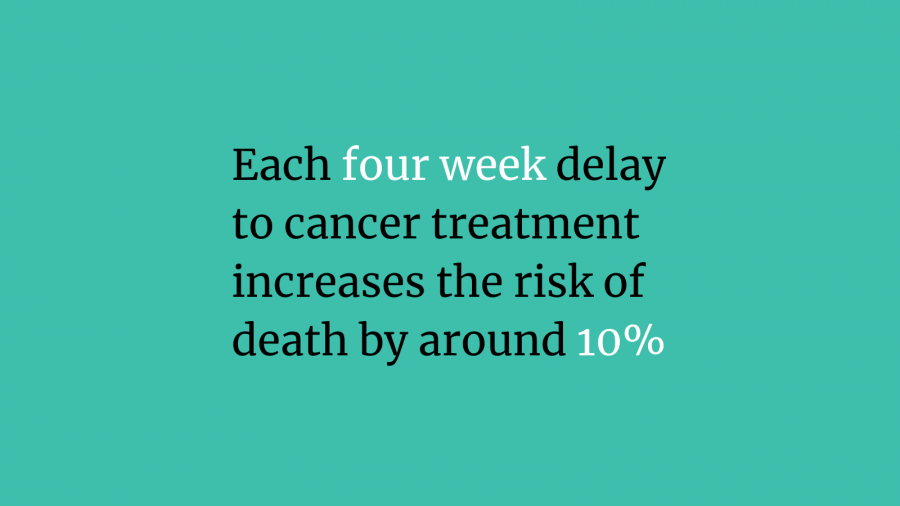 People whose treatment for cancer is delayed by even one month have 6 to 13% higher risk of dying – a risk that keeps rising the longer their treatment does not begin – suggests research published in The BMJ.

Canadian and UK researchers found there was a significant impact on a person’s mortality if their treatment was delayed, whether surgical, systemic therapy (such as chemotherapy), or radiotherapy for seven types of cancer – including cancers of the breast, bowel, and head and neck.

The team of researchers from the London School of Hygiene & Tropical Medicine, King’s College London and Queen’s University, Canada, led by Dr’s Timothy Hanna and Ajay Aggarwal, carried out a systematic review and analysis of 34 studies into cancer treatment delays and mortality risk between January 2000 and April 2020.

Of the 1.2 million patients studied, the association between delay of treatment and increased mortality was significant for 13 of the 17 types of conditions known as indications.

Globally, health systems have problems with cancer treatment delays and it is already widely accepted that such delays can have adverse consequences on a patient’s outcome. But the precise impact of delays from diagnosis to receipt of treatment on mortality has not been thoroughly analysed.

The need for better understanding of the impact of treatment delay on outcomes has come into focus during the COVID-19 pandemic because many countries have experienced deferral of elective cancer surgery and radiotherapy as well as reductions in the use of systemic therapies, while health systems have directed resources to preparing for the pandemic.

The researchers analysed data on surgical interventions, systemic therapy (such as chemotherapy), or radiotherapy for seven forms of cancer – bladder, breast, colon, rectum, lung, cervix, and head and neck – that together, represent 44% of all incident cancers globally.

They measured the  risk to overall survival per four-week delay for each indication and delays were measured from diagnosis to first treatment, or from the completion of one treatment to the start of the next.

Analysis of the results showed that across all three treatment approaches, a treatment delay of four weeks was associated with an increase in the risk of death.

A surgical delay of 12 weeks for all patients with breast cancer for a year (for example during COVID-19 lockdown and recovery) would lead to 1,400 excess deaths in the UK, 6,100 in the United States, 700 in Canada, and 500 in Australia, assuming surgery was the first treatment in 83% of cases, and mortality without delay was 12%.

Dr Ajay Aggarwal said: “There has never been a systematic attempt to look at all the evidence on what delays in different types of treatment mean for cancer patient outcomes. Because we know this is happening to cancer patients during the COVID-19 pandemic it is essential to understand the real impact.

“The concern is that at the start of lockdown health systems such as in the UK suggested that some surgeries, for example bowel cancer surgery, could be safely deferred by up to 12 weeks. Our study suggests that this is not the case and could in fact increase the risk of premature death.

“As we move towards the second COVID-19 wave in many countries, the results emphasise the need to prioritise cancer services including surgery, drug treatments and radiotherapy as even a 4-week delay can significantly increase the risk of cancer death.”

The researchers acknowledge that their study had limitations such as the fact that it was based on data from observational research which cannot perfectly establish cause, and it was possible that patients with longer treatment delays were destined to have inferior outcomes for reasons of having multiple illnesses or treatment morbidity.

Nevertheless, their analysis was based on a large amount of data and they ensured that they only included high quality studies that had high validity, meaning they accurately measured what they were investigating.

Dr Timothy Hanna concludes: “A four week delay in treatment is associated with an increase in mortality across all common forms of cancer treatment, with longer delays being increasingly detrimental. In light of these results, policies focused on minimising system level delays in cancer treatment initiation could improve population level survival outcomes.”