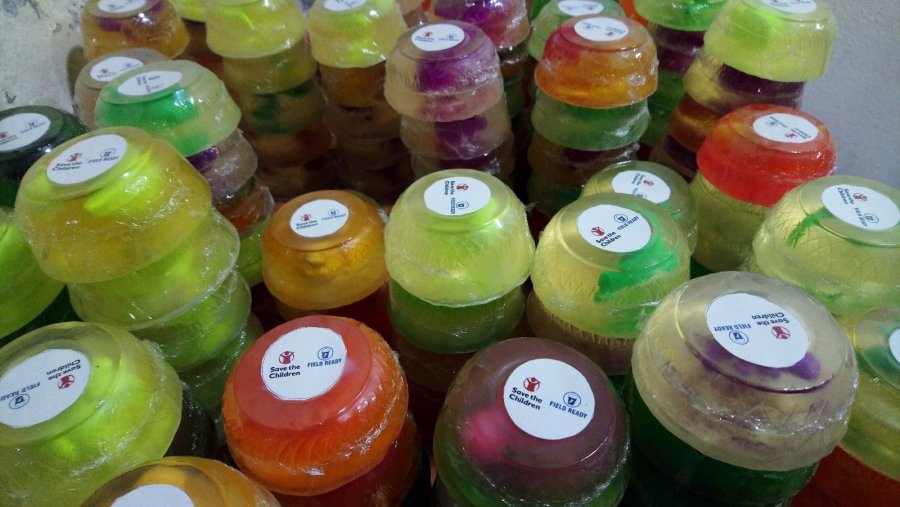 Children who had fled their homes because of conflict were four times more likely to wash their hands with soap if it was made in a fun and innovative way, according to research published in International Journal of Hygiene and Environmental Health.

The study, led by the London School of Hygiene & Tropical Medicine (LSHTM), Save the Children and Field Ready looked to find a way to increase rates of handwashing in emergency settings.

Researchers gave families in a displaced persons camp in Iraq a soap with a visible toy embedded in the centre. The more children used the soap, the quicker they reached the toy. Children in the camp were involved in choosing the toys that were used, before they were manufactured locally using 3D printers.

The findings show that play may be the key to increasing handwashing and saving lives in emergencies. It is the first time a motive-based handwashing approach has been tested with children in an emergency.

Handwashing is one of the most cost-effective ways of saving lives worldwide. It can reduce rates of pneumonia – the disease that kills more children than any other – by up to 21% and rates of diarrhoeal diseases like cholera by up to 23%. Pneumonia killed almost 900,000 children under the age of five in 2016 and diarrhoea caused the deaths of 480,000.

Children caught up in emergencies are especially vulnerable to death and illness caused by poor hygiene, as they are forced to flee or shelter in dirty conditions.

The team conducted the research as humanitarian aid providers have long found that providing soap along with health and hygiene information has a limited impact on increasing handwashing, and so new approaches are needed.

In the study children in forty households in the camp were given the ‘Surprise Soap’ delivered along with short, fun and interactive household sessions that didn’t involve talking about health. Alongside this a control group of children in forty households in the same camp were given normal soap and sessions explaining the health benefits of handwashing and good hygiene - mirroring the approach often taken in emergencies around the world.

Four weeks later, researchers found that children who received the ‘Surprise Soap’ intervention were four times more likely to wash their hands with soap at crucial moments, such as before eating or after using the toilet, than if they had not received the intervention, based on a comparison to the control group.

Julie Watson, who led the pilot programme at LSHTM, said: “We saw straight away that the children were excited about the toy soaps. The results were very promising and show the value of using innovative design as a tool for behaviour change.

“If we can successfully scale up this intervention it has the potential to have a huge health impact in emergencies – and ultimately to save lives.”

The project was underpinned by the ‘Evo-Eco’ theory, developed by LSHTM experts, which suggests that all human behaviour is driven by fifteen innate motives, including ‘hunger’ and ‘disgust’ – as well as ‘play’ and ‘curiosity’ – those tested in the study. These motives have developed because they help people achieve goals important to evolution, such as finding food.

Claudio Deola, Senior Humanitarian Water, Sanitation and Hygiene Advisor at Save the Children, said: “We have known for a long time that in the midst of the conflict and displacement the simple act of handwashing saves lives. But in the chaotic aftermath of fighting or a natural disaster, we see time and again that providing soap and information is only part of the picture. We needed to think creatively.

“Not only were children more likely to wash their hands, but the pilot achieved this without the need for labour-intensive hygiene-promotion. This is so important when you need to be quick and are short of resources in the critical first phase of an emergency response.”

The researchers say that their study provides evidence that this rapidly deployable intervention may have the potential to be rolled out as standard in emergencies worldwide.

The team are now looking to further test the 'Surprise Soaps' intervention in different, more challenging humanitarian contexts and to assess the long term behavioural and health impacts.

The authors acknowledge the limitations of their study including a differential drop-out rate in both the intervention and control groups, which may reflect some underlying difference between the two groups that could bias results. In addition, the risk of the ‘Hawthorne Effect’, which suggests individuals may modify their behaviour in response to their awareness of being observed.

The study was funded by the Humanitarian Innovation Fund.

The pilot took place at a camp in Northern Iraq, home to Yazidi families who fled ISIS’s campaign of brutal violence when it reached their homes in 2014.

Health in Humanitarian Crises Centre
Save the Children
Learn More