London School of Hygiene & Tropical Medicine https://lshtm.ac.uk/themes/custom/lshtm/images/lshtm-logo-black.png Tuesday 22 March 2022
“I constantly hear explosions, and I don't know if they will reach me or not… What worries me most now is that I have been separated from my son.” 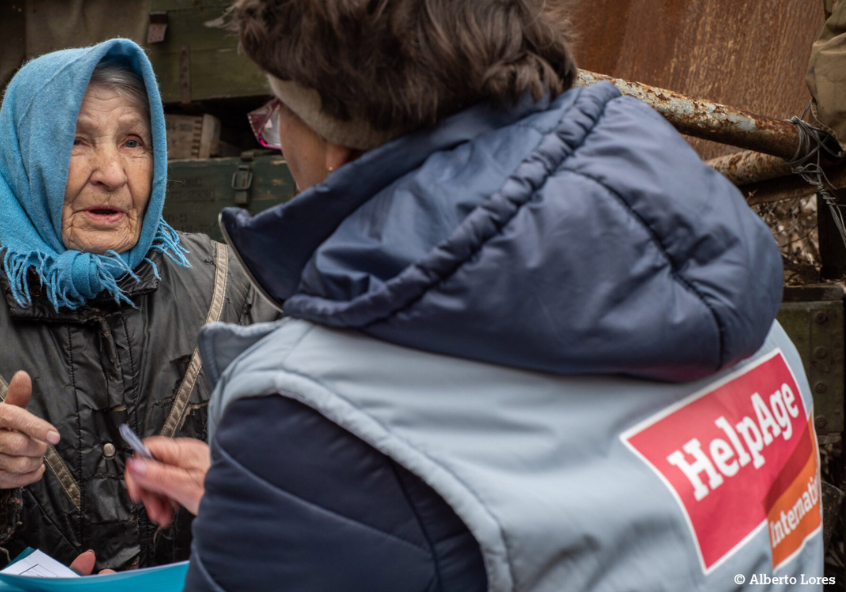 Those are the words of Olga, a 71-year-old woman who lives just five kilometres from the “contact line”, in Luhansk province, in the government-controlled area (GCA) of Eastern Ukraine, speaking a week before Russia escalated its invasion of Ukraine. Her son, granddaughter and two great grandchildren live on the other side of the stretch of land, in the non-government-controlled area (NGCA). They are separated by ongoing fighting and various checkpoints, making visits difficult and dangerous. Olga lives alone and has difficulty walking because of pain in her legs and joints. She also has high blood pressure and often experiences severe headaches.

Olga is one of more than two million older people in Eastern Ukraine who are at severe risk as a result of the conflict.

For Olga and many others, the situation was dire prior to the invasion. The conflict in Eastern Ukraine has been ongoing since 2014 and more than one third (37%) of the people in need are over 60 years old (2,3). According to the UN Office for the Coordination of Humanitarian Affairs (UNOCHA), “this is the highest proportion of elderly people in need among humanitarian settings in the world”.

As the humanitarian response ramps up to meet the growing need in Ukraine and surrounding countries, we must remember older people and people with disabilities.

In my work at the International Centre for Evidence in Disability and the Health in Humanitarian Crises Centre at LSHTM, I met and conducted research in 2017 with older people with disabilities who have been affected since the start of the conflict. Their needs were acute even before the recent escalation.

Older people and people with disabilities are among the most vulnerable in humanitarian crises. Many have difficulty fleeing danger and are more likely to shelter where they are than others. Older people in Ukraine often do not want to leave their homes. Even if they do, it’s more difficult because of inaccessibility, financial constraints, barriers with how social support and healthcare is delivered, and a lack of inclusive humanitarian response. If they leave, they are more likely to go after the fighting has started, putting them at greater risk.

A major issue in Eastern Ukraine is inaccessibility of homes, roads and public transport. This makes it more difficult to escape, access food and medicine, or find safe shelter from shelling and bombing. As Olga explains: “If a war breaks out, the only place to hide is the cellar. There is a bomb shelter at the local school, but it is four to five km away from us.”

Older people in Ukraine rely on their pension for income, but it is often not enough to meet their needs. The conflict has caused price increases for goods such as food, gas and medicine and a drop in the value of the Ukrainian currency, the hryvnia. Older people need to take extra measures to make ends meet, such as lowering their heat or heating their homes with wood, despite not being able to chop and carry it themselves. They may also be forced to choose between food and medicine (medicine usually taking priority).

To make matters worse, food is scarce, and electricity, water, and gas is periodically shut off. Healthcare is also more difficult to access, especially as specialised services such as surgeries and eye care are transferred to other areas, and in some cases people have to return to areas of active fighting to receive their pension or access vital medicine and healthcare services.

Many older people with disabilities in Ukraine experience isolation, especially if they are separated from family and friends because of conflict. In addition, the psychosocial stressors and traumas can result in mental health impairments such as PTSD and depression. Older people and people with disabilities often have greater healthcare needs (e.g. medical, physiotherapy, occupational therapy, prosthetics and orthotics), yet less access to those very services. This is the situation for many in Ukraine. Tragically, as the war escalates and draws on, it will get worse.

So, what can be done? First, humanitarian agencies can work with partners and organisations of people with disabilities and older people’s associations to find those who may need support and work together to help reduce the barriers they face. For those who are being displaced, humanitarian agencies can assist with accessible transportation and ensuring that financial and healthcare needs are met on route and at destination.

It is vital that humanitarian agencies support older people with disabilities who decide to stay in their communities by providing access to life-saving supplies, food, water, sanitation and hygiene materials, and money. We know that many of these individuals have difficulty accessing distribution sites and healthcare facilities. So, support must be provided to assist people in accessing these sites, and food and non-food items must be delivered to the homes of people who are unable to reach them.

Healthcare, including mental health services and rehabilitation, must also be delivered in a way that is accessible. In some cases, this means providing care virtually or in people’s homes.

Social support, including connecting families, can also be strengthened. There are centres for older people in Eastern Ukraine; these should be supported and if necessary moved to safe locations.

Perhaps most importantly, we must draw on the experience and diversity of older people and people with disabilities to inform the humanitarian response and recovery. Many older people have experienced conflict in the past; we must listen to those experiences, learn from our elders, act fast, and commit for the long-term.

Olga, and her peers, must not be forgotten.

* Phil Sheppard's thesis focuses on older people with disabilities in humanitarian crises in Ukraine and Tanzania. His work has been conducted in collaboration with HelpAge International, a global NGO supporting older people.