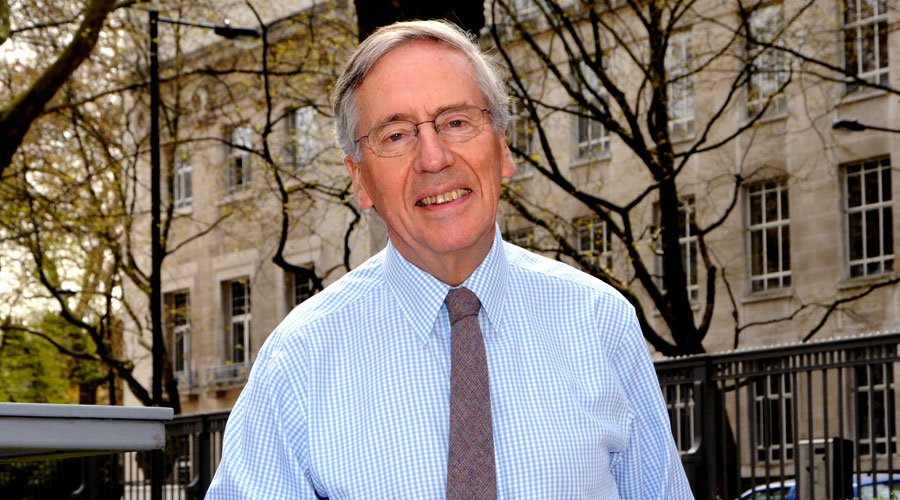 It is with great sadness that we share news of the death of Emeritus Professor Tom Meade DM FRCP FFPH FinstMed FRS, who passed away on 24 October 2022.

Tom Meade qualified in medicine from Oxford University in 1960. After house and registrar appointments at Barts and in Oxford, he spent a year at the Schieffelin Leprosy Research Sanatorium in South India working on clinical and epidemiological aspects of leprosy. His many contributions to scientific knowledge, public health and health care spanned five decades. He had several associations with LSHTM. His first was when Jerry Morris sent him on the short course in Epidemiology and Medical Statistics in 1966.  His second was when Jerry moved to LSHTM as Professor of Public Health, bringing his MRC Unit with him including Tom as a member of staff. In 1970, he was appointed Director of the MRC Epidemiology and Medical Care Unit based at Northwick Park Hospital in Harrow for much of its existence, moving to the Wolfson Institute at what is now QMUL (formerly Barts medical school) in 1992. When he was at Northwick Park, he was also appointed the MRC’s representative on the Court of Governors. He returned to LSHTM in 2001 as Emeritus Professor of Epidemiology after his retirement from the MRC.

It was Jerry Morris’s research that showed that the prevalence of advanced atheroma in middle-aged men just after the First and Second World Wars had not increased over this time – it had, if anything, decreased. This suggested that other factors must be involved in the increasing incidence of cardiovascular disease over that period and, together with other research on thrombosis, triggered Tom’s interest in the role of the clotting system that led to his pioneering work.  His main personal interest was the role of the coagulation system in the development of coronary heart disease (CHD), approached through epidemiological studies of the association of clotting factors with CHD and through clinical trials of antithrombotic measures. His work involved the development and application of laboratory techniques in epidemiological, as well as clinical, investigations of cardiovascular disease, working with a dedicated team of laboratory scientists. The research he led has spanned a wide spectrum of research from basic biological studies of the aetiology, risks and mechanisms of cardiovascular disease to epidemiological investigations and intervention trials

He led the Northwick Park Heart Study (NPHS) that recruited over 3,000 participants, mainly from the Heinz food company that was based close by. This prospective study included measures of haemostatic (or blood clotting) function, i.e. platelet activity, clotting factor levels and an index of fibrinolytic activity (blood clot dissolving ability), alongside measures of conventional CHD risk factors such as the blood cholesterol and blood pressure levels and smoking habit.  This had not previously been done on any large scale.

The Thrombosis Prevention Trial, led by Tom, was a massive endeavour in which 95,000 men recruited through 108 GP practices were invited to a screening session of which about 5,500 high risk individuals entered the trial. It used a factorial design, so there were four active treatment groups, aspirin only, low dose warfarin only, both aspirin and warfarin and neither active treatment. It demonstrated that low dose warfarin reduced the risk of fatal heart attacks and aspirin reduced the risk of non-fatal events.

Clinical trials in General Practice settings organised by the MRC Unit under Tom Meade’s direction have also shown the efficacy and cost-effectiveness of hypertension treatment in elderly people and the effectiveness of brief interventions for excessive alcohol consumption. His support of large scale multi practice research in primary care settings led to the Formation of the MRC GP Research Framework that undertook many influential epidemiological studies and intervention trials and comprised about 1,000 practices representative of the regional and social characteristics of different parts of the United Kingdom. On the health services research side, the Unit made original and significant contributions on unglamorous, but important and previously neglected topics such as incontinence, low back pain, interventions for heavy alcohol consumption and stroke rehabilitation. An example of his openness to new ideas and commitment to rigorous evaluation was shown by a randomised trial of chiropractic treatment for low back pain of mechanical origin that showed a substantial benefits of chiropractic intervention compared with hospital outpatient treatment.

Professor Sir Andy Haines, who worked with Tom Meade for 11 years at the MRC, said: “Tom was a wonderful role model for a young researcher and was highly supportive during my early research career. He was both innovative and highly systematic in the way he approached research questions. He was concerned not only to further our understanding of cardiovascular disease but also to improve outcomes for patients. I also admired his capacity to encompass both observational research and large scale randomised controlled trials across a range of interventions. I learnt so much working with him about the design, conduct and reporting of research, lessons that have remained with me throughout my professional career.”

He was elected a Fellow of the Royal Society (FRS) in 1996 and in 1997 he was awarded the Balzan Prize for Epidemiology for his pioneering work in the role blood clotting factors play in the incidence of cardiovascular disease, thus leading to new strategies for prevention and treatment. He was made a Commander of the Order of the British Empire (CBE) in the 1994 Birthday Honours for Services to Medicine and to Science. At Northwick Park and Barts he was physician in charge of the thrombosis clinic.

On his retirement from the MRC in 2001, Tom moved back to LSHTM as Emeritus Professor of Epidemiology, where he continued working. While at LSHTM Tom was co-author of an overview of trials of aspirin in the primary prevention of CHD, showing that low-doses of aspirin (75 milligrams daily) is as effective as higher doses with a lower risk of bleeding. The results of his and other trials of aspirin have also shown that it is valuable in reducing the incidence, metastasis and mortality of several cancers, principally of the large bowel. At LSHTM he worked with Tim Clayton  on the analysis of the 30 year follow up of the NPHS as well on a large case-control study using the IMS Disease Analyzer Mediplus primary care database helping to establish the link between respiratory infection and risk of cardiovascular outcomes and with Bianca DeStavola on the analysis of the 30 year follow up of the original NPHS and a second study- NPHS-2 -using more recent methodological advances to assess platelet function and coagulation factors.

In 2002, Tom Meade was awarded the MRC’s Millennium Medal for his contribution to advance UK health, particularly in cardiovascular disease.

He was a member of many influential committees over his professional lifetime including the Adverse Drug Reaction Committee of the Committee on Safety of Medicines, the Advisory Group on Non-Ionizing Radiation, (dealing with the possible effects of exposure to power lines and electrical sub-stations on the development of acute lymphoblastic leukaemia in children) and chair of the Protocol Development Group for UK Biobank. He chaired the LSHTM Ethics Committee for many years, demonstrating committed citizenship at a time when he was formally retired.

Tom Meade was an outstanding scientist who made wide ranging contributions to our understanding of the pathogenesis of cardiovascular disease and the functioning of the coagulation system based on careful standardisation of laboratory methods and their application to large populations. He was also instrumental in supporting a wide range of other world leading studies that had tangible impacts on health care for common conditions through his leadership of the MRC Epidemiology and Medical Care Unit.

Professor Tim Clayton said: "It was my immense privilege to work with Tom for nearly 30 years. Despite his stature in the cardiovascular work and his decades of experience he was one of the most modest people I have met always promoting and encouraging others and always so grateful even at our first meeting when I worked on my first trial where he was the Chair of the DMC (RITA-2). Knowing Tom as a colleague and friend has been one of the highlights of my time at LSHTM and a true inspiration – he will be greatly missed."