Colleagues at LSHTM, across the UK and around the globe have been reflecting on David’s marvellous 'life scientific' in a spirit of both celebration and profound loss in equal measure in the days since. An internationally recognised parasitologist of great stature, and one of the foremost experts in antimalarial chemotherapy of his generation, David is already sorely missed. No MSc student who had the pleasure to be taught by Prof Warhurst, no doctoral candidate who benefited from his wise supervision, no fellow parasitologist at home or abroad who received generous helpings of his advanced thinking – none of these will forget David’s contribution to their own scientific journey. The field of parasitology has lost one of its true greats.

David Warhurst received his BSc in zoology at Leicester University, and completed his PhD there on the amoebic fauna of cockroaches. He joined the National Institute for Medical Research, Mill Hill as a post-doc in 1963 and was there for 5 years. Here, David began what was to become a life- long interest in anti-malarial chemotherapy, working on chloroquine resistance under the direction of Dr Frank Hawking. Stephen Hawking, as a young lad visiting his father’s lab, was well known to the parasitology team, including David and Geoff Targett, a contemporary in Hawking’s group. With David Hockley at NIMR, David Warhurst showed that the antimalarial drug chloroquine, instead of attacking DNA as originally hypothesised, targeted the digestive system of malaria parasites, stimulating autophagy and parasite death. An extremely able post-doc, David together with James Williamson was able for the first time, to characterise ribosomal RNA from Plasmodium while at NIMR. 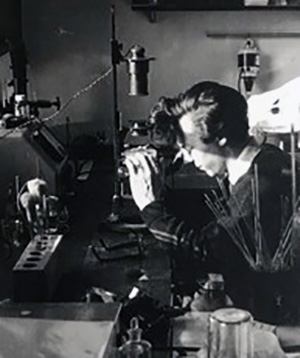 In September 1968, David took a position as Research Fellow in the MRC research group set up by Wallace Peters at the Liverpool School of Tropical Medicine to work on the chemotherapy of protozoal diseases and drug resistance. Together with Prof Peters, David developed a number of in vivo tests using rodent malaria parasites, allowing both sensitive and drug resistant strains to be studied. Of course, the main focus was on chloroquine (CQ) resistance because of the interest of the American army, and the rapid spread of resistance around malaria endemic countries at the time. For several decades the tests developed by Warhurst, Peters and the Liverpool team were widely used throughout the world to evaluate CQ susceptibility. In addition to these tests David investigated the biological mechanisms of CQ resistance. At the same time, he found time to study the DNA of rodent malaria species, having developed some ingenious methods for isolating malarial DNA from infected mouse blood. Among collaborators in this work was Michael Chance, who joined Warhurst and Peters in 1970. At Liverpool, David was working with a number of scientists who went on to become the backbone of UK parasitology, including among others David Molyneux and Marcel Hommel.

Dr Warhurst returned to London and joined LSHTM as a Senior Lecturer in the Department of Medical Protozoology in September 1976, but being based in the Public Health Laboratory Service (PHLS) Amoebiasis Unit with Air Vice Marshall W.P. Stamm. This was located at St Giles’ Hospital in Camberwell, famous for having been hit by a V1 flying bomb in the London blitz, but the Unit then moved to the Hospital for Tropical Diseases (HTD) at St Pancras, in 1981. Establishing a research lab in the Keppel St building while continuing his HTD role, David continued to be supported by PHLS (later the Health Protection Agency) and greatly extended the depth and output of his seminal work on antimalarial drug action. At this time, he became co-Director of the PHLS Malaria Reference Laboratory with Prof David Bradley, and worked closely with the MRL staff led by John Williams, until his retirement in October 2003.

During this extended, highly productive period David’s output was phenomenal, as a clinical scientist, a researcher and as a doctoral supervisor of the highest calibre. Any visitor to David’s LSHTM office in those years could not have failed to notice the pride with which he displayed the hard-bound PhD theses of his successful students from all around the world, many of whom have contributed to this obituary. David also continued his interest in amoebae, particularly pathogenic free-living amoebae of the eye and brain, and also ran a major programme on protozoa associated with diarrhoea.

At his retirement, David dedicated himself to providing care for his wife Rosemary, who died in 2008. He then became much more active at LSHTM once again, as Emeritus Professor of Protozoan Chemotherapy. He continued to collaborate widely with researchers in-house and around the world, attend regular weekly laboratory meetings and to support more junior colleagues with advice, in silico analyses and proof-reading of reports and papers right up until the Sars-CoV-2 lockdown in March 2020. During this remarkable 'second wind' he remained an active member of the Malaria Centre and published no fewer than 23 research papers, reviews, opinion pieces and published talks. A fuller listing of his many scholarly outputs can be accessed on Google Scholar.

David is sorely missed by his three sons Robert, Michael and Neil, and their families. Michael Warhurst has sent a link to a memorial page where LSHTM colleagues may want post a tribute to David.

Some tributes from former LSHTM colleagues and doctoral students:

“Few people have the ability to change the course of one's life for the best, and David Charles Warhurst was one of them. I met him in 1987 when he came [to Bogotá, Colombia] to teach us how to culture E. histolytica. Over the next 34 years David's mentoring provided the reassurance and unconditional support that I needed to develop as a scientist. In time I learned that his superpower was generosity. With Rosemary, his lovely wife, scores of David's foreign students were invited for a meal and a visit to Dulwich Gallery during their first weeks in London. It was also thanks to David's generosity with his time and extraordinary knowledge that many of his collaborators saw their results further analysed and published. His contributions to the field of malariology are invaluable, but these lines are not to remember the brilliant scientist, these are to celebrate the remarkable human being we all know and love. David has not totally departed; his spirit lives among all of us!”

“I will greatly miss Dr Warhurst, as I used to call him before I graduated. As my PhD supervisor, his incredible deep knowledge of all things parasitological was so impressive and enabling, and his child-like excitement for scientific enquiry made you feel like your thesis work was important and an adventure. As a person, his kindness, generosity, and encouragement, always accompanied with a smile and a chuckle, made him such a wonderful role model. Thank you David!“

“I can’t imagine having a more perfect doctoral supervisor. David had not only an encyclopedic knowledge of parasitology, but he was a visionary thinker and scientist. His kindness, sense of humour, passion for his students created an environment that brought out the best in everyone. I would not be where I am, would not have done the things I’ve done, if it weren’t for David. I will sorely miss him.”

“I knew David first when we were both at NIMR, but it was at LSHTM, when David had already become internationally recognised for his outstanding research that I knew him best.

An abiding memory of David will be sitting alongside him at his untidy desk but tapping into his prodigious knowledge of his scientific interests and passions, most notably on the underlying mechanisms of antimalarial drugs and the acquired resistance to those drugs.

There was never any self-promotion with David; his ambitions were the resolutions of these complex scientific problems, then generously sharing what he knew or discovered with colleagues, especially with the many doctoral students and younger scientists with whom he was associated. He energised all those around him.”

Compiled by Debbie Nolder and Colin Sutherland with assistance from many of David’s friends, students and colleagues.